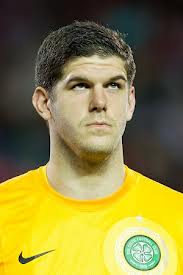 Goalkeeper Fraser Forster took time out from searching the internet for cheap and fast removal firms to insist that he can still win England caps at Celtic. There we all were reading between his lines that he was angling for a move, when all he really meant was he was angling for a move. Looks like it was one of those interviews where something got lost in translation.

Forster claims to have enjoyed playing against the top forwards in the world in last years Champions League, and just wants to do it again. Sunderland are interested in taking him south, if the keeper they have goes. Well, at least the big man will be busy if that comes off.  Maybe we could swap him for James McLean, who whilst not a great player, has a certain cult appeal amongst some Celtic fans.

The suggestion that former Rangers keeper Alan MacGregor could fill the void has divided Celtic fans. Some don’t want him, and some really don’t want him. So, thats that then.

Shay Given it is.

McGregor is wanted by Hull City, who are also looking at Gary Hooper, so you can’t fault their ambition, if you can their sense of reality. SSN  says McGregor will cost £1m-well, thats what they’re going to offer..

Bertie Auld, speaking at the launch of a new book about Jimmy McGrory, says that Hull is “beautiful if you’re a fisherman”   and gave Hooper some useful career advice.

” Gary will achieve more on the park at Celtic and adore it because he’ll never get fans like it again in his life. ”

Fair enough, for guys like Auld it was never about the money. These days, of course, players are conditioned by the amount of  cash available down south, but Auld has advice for todays players here as well.

” Once you get to a certain stage with the bank manager, you just want happiness. You want enjoyment, to be able to get up in the morning, look yourself in the mirror and say “i want to go here ” ”

Davie Hay, another former player , reckons that even if Hooper and Forster do go, theres no real need for major surgery, and he’s confident the club have a plan b in place anyway.

Perhaps its just the sense of deja vu, the feeling that we’ve all been here before, that makes most of us worry that we’ll start next term weaker than last term.  Some of us are still struggling to come to terms with Dalglish leaving for Liverpool.

Perry Groves , a former Arsenal journeyman, and not a street in Monaco, has “urged ” Arsene Wenger to snap up Victor Wanyama , as he is just what the Gunners need.  Groves, who used to work for Talksport before he moved to 5live, is hardly  Wengers chief advisor on these matters, but the amount of publicity his statement has been given is alarming. Lets hope its something else Wenger didn’t see.

Wanyama is also being touted for a move to fallen Italian giants Inter Milan. They finished ninth last year, and are cited as hoping to re-unite Vic with his brother MacDonald Maringa, who is already at the club. Well, already at the club is a fairly loose description. He’s been out  on loan for the last four years, so this looks like another bit of lazy journalism. Which should come as no big surprise.

Anyway, thats the MSMs chosen departures dealt with, what about the possible incomings?

Amigo Balde has challenged Gary Hooper to a square go to prove he’s the better player, Tony Stokes has nipped to Belfast to watch it in the pub on telly.

Alexander Tonev is definitely going to Aston Villa, as is Charlie Austin, who was also mentioned in despatches a while ago. At least that keeps up the diarys 100% record on signings.

Actually, far easier to just say that everyone we are linked with isn’t coming, (except Johnny Russell, ) and the ones we’ve already got want out.

So, its all bad news for Celtic, and could it be good news for Rangers?

Nothing new , really. Walter Smiths appointment as chairman means that the club is now stable and will be forced to ask supporters to share season books, such is the anticipated uptake. In fact, they will probably have to pay some sort of  membership fee just to register to buy a share in a season book. And on weeknights they will have to pop to the ground with a tool box and help with repairs.

Michael Gannon in the record says that the four new signings are not showing a lack of ambition by playing in Division 2, and its not all about money. He thinks they are going there now because soon Sevco will be in the top league and , ach you know the rest.

For those of us living in England, Gannon is a new name, and a google search shows that he is either a yoga teacher or an American military historian. All that is listed linking him with  the Record are a few articles. Shame, really. He sounds like a fun guy. ( Have I spelt that right?  Multicellular spore producing organisms feeding on organic matter  were never my strong point.)

Craig Whyte has confirmed he is going to court to win back what he says is rightfully his. This following  the report from Pinsett and the Masons, which says he never had anything to do with Sevco Scotland.

That was kind of the point Whyte was making. Sevco Scotland was what Green used to shaft him.

Whatever the “inquiry” cost Sevco, it was certainly money well spent. This kind of transaction is known in the business as a “Tore Andre Flo ”

Still, Walter is back at the helm, so , with the help of his pals like Campbell Ogilvie, Sandy Bryson and David Longmuir, the future of  the new club  is in safe hands. 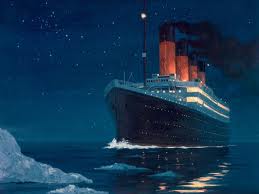 Elsewhere in Scotland, the exodus from Inverness continues as Owen Tudur Jones joins Hibernian.  The Edinburgh side have also secured the impressive Ryan McGivern from Manchester City after his loan spell. Poor Terry Butcher. He was doing so well.

Steve Brown, the chairman of St. Johnstone has denied any sort of cantact from Millwall as they are linked with boss Steve Lomas.  Brown said there has been “no contact whatsoever from Millwall. ”

Manager Lomas was unavailable for comment, as he is away for a refreshing break by the River Thames.

Aberdeen are looking to sign former Celts  Barry Robson and Willo Flood. Dundee Utd boss Jackie MacNamara may not have any players left come August, surely he’s not been on the beer again at the end of season disco?

Fianlly , Mark McGhee, who is somehow still in football and second in command with Scotland, says that Scotland will not end the current campaign bottom of their qualifying group.

If thats what he thinks, then I’m off to the bookies to put money on a wooden spoon finish.

The mystery of his appointment to his current post has been solved. Here, he explains to Gordon Strachan what he has seen in the paper about his pal, and promises to reveal all if ever Strachan lets him down… 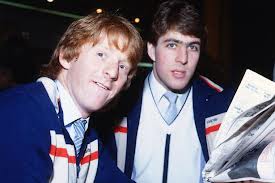 Willie Wallace was the guy in the photo yesterday, he became part of the greatest team of all, thus achieving slightly more than this guy..

Stuart Slater……arrived in Glasgow and forgot to pack his talent. he was shit hot with the hammers…….still a mystery why he was a dud.

If you ever thought that Jabba’s ‘succulent lamb’ article could never, ever be topped for levels of sickening, ass-kissing sheer sycophancy then get yourself over to the Hootsmon site and check out an article by Alan Patullo on his hero ‘Walter’.

Some caution is advised, notably several buckets at hand to contain your vomit and an ambulance waiting to take you to A & E to help repair some of those broken ribs!

Meant tae say you could get a cpl dvds mcgregors
Bloopers.well overrated man.

A mind reading an article in shoot magazine (before he signed) saying he could do 10000 keepie ups. as a lad whose record was about 13 at that point, a was over the moon when he signed.

Stevie we had a 13 year old in our Boys Club side at the time who could do 10,000 keepy uppies…he was always a sub due to the fact he was mince compared to the rest lol

the loyal waistecoat,is now enshrined as the chairman of hun fc, the biggest MASONIC ORANGE PRESBYTERIAN CONSPIRACY HAS EVOLVED NOW JUST WHAT WILL ” LEAD ME TO THE ALTER” TO DO FIRT HUNS LADS