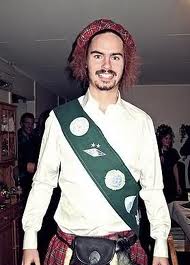 Mikael Lustig looks to have talked himself out of the  cup final line up.

“We know there is a lot of games involved and you have to try to be alert in your head. ”

Lustig was referring to his tough schedule ahead.

” I’m away with Sweden after the Cup final. We play Austria away and the Faroe Islands at home in the World cup qualifiers. Its another three weeks before I can rest , but hopefully I can handle that. Hopefully we will have a strong squad next year so I don’t think I will have to play 60 or 70 games next year. ”

Aye, or just slightly more than one a week, to put it another way. Hopefully, he has been misunderstood. Otherwise, Adam Matthews just got re instated as first choice right back.

For any professional footballer to moan about being tired seems ludicrous to a supporter. They do a couple of hours training in the morn, and are advised to rest before games. Even the worst case scenario, two matches a week should not be beyond them, although there is a case for not playing them if not fully fit.

Still, if Lustig is feeling the pace, and in his defence, he had little rest last summer as well, as long as he lets us know when he can play, we can sort of work round him. He could ring in on matchdays and let the management know if he fancies a game.

I think we will put it down to the head knock he got in the St. Johnstone game.

SFA performance director ( they have a director of performance? ) Mark Wotte has criticised Kris Commons for quitting international football.

Oh wait, no, it was this quote;

Brown continued his magnificent defence of his team mate, in the way that a Celtic captain should.

” Every man to his own. We stay away in a lot of hotels on European trips, and it is hard to see your family so I understand where he is coming from. We’re also in a hotel for every match and you can sometimes be there three times a week. Then you have the three matches so you could be having just a night or two in your own house. It can be hard.”

Then Brown was informed of Lustigs comments, shook his head, and began all over again…

Well, he didn’t, but he probably will.

Thats because the team is a team, off the pitch as well as on it. Manager Lennon has taken some young players, and developed them into a team, not just of eleven players, but around twenty. Its a form of socialism, as Bill Shankly once said.

SSN have a shortlist of eight for the Everton job, and Neil Lennon is not on it. Alan Stubbs and David Weir are, which shows they have not altered their level of ambition down at Goodison. Tony Pulis is available, but word in Stoke is that he will be coaching the British Lions this summer.

Actually, he’s away to see his son in the States.

Martin O’Neill was touted for a job with Stoke before he went to Sunderland, and it wouldn’t be a surprise to see him go there, but without Henrik Larsson in the side, he will struggle again.

Transfer news that could concern Celtic, and as ever , we (Johnny Russell, c. £1m ) we have no idea who is ( russell, Dundee Utd) on the radar.

Some sources claim that Kevin Doyle could arrive ( Johnny Russell, do you hear? ) but thats just a re hash of an old story, and the only other with any credibility is Alexander Tonev, but that came from Radio Clyde. At least Talksport gets some of the prices in Wickes right, Clyde struggles to tell the correct time.

16 year old Liam Coogans of Airdrie has been invited over to Lennoxtown to train, thus following in the path already trodden by Tony Watt. Watt has risen to the giddy heights of an international call up, as well as  “that” goal against Barcelona, and Coogans will be using that as an inspiration. He has scored twice in seven first division games this season, as well as four in a reserve game.

Tom English tweeted Charlotte Fakeover to ask if any of the stuff being released was true, and got a reply asking if he had asked any of those featured in the letters and tapes what they had to say about it.

How much help do the MSM need here? Surely one of the first things to do is seek a reaction?

Not in the country which has seen administrators Duff and Phelps cleared of wrongdoing by the IPA, who keep an eye out for that sort of thing, whilst keeping the other firmly closed, presumably.

The administration pairing of  David Whitehouse and Paul Clark were not guilty of misconduct, but were considered to have at worst ”  failed to fully consider and manage the public perception of a conflict of interest.”

The quote they gave for £500,000 for their work was ” provided on a different basis to work carried out. ”

So, thats alright then.

They are going to need a much bigger carpet if they keep sweeping things underneath it.

The delusion and denial over at Ibrox continues, with their Sky Text news page only lauding the signing of Cammy Bell from Kilmarnock, and the re-signing of  Andy Mitchell. Incidentally, theres plenty of pictures of Bell in his new  role on the web, but no pics of him with McCoist. Was there a sale at Greggs keeping the boss busy?

A Reverend Stuart Campbell has written his thoughts on Armageddon and Scottish football, and its a worthy read. Its also possibly the only other article around which talks up the game in Scotland, with an interesting view on independence as well.

Elsewhere, Celtic have recognised the contribution of the ” Celts for Change ” group back in the nineties by unveiling a plaque honouring those who fought against the old board and played a big part in saving the club back then. This link takes you to a brief  run down of how it happened, and a picture of the plaque.

Anyway, some things never change, and Neil Lennon is in front of the beaks again today, charged with not tying his shoelaces or something equally ludicrous.

He may well be relegated to the stand for the Cup final, or exiled to St. Helena, but will probably only be fined, given community service and have to wear a tag for the rest of his life. Or all of the above.

Anyway, I reminded him of his appointment, and can you tell me what his reply  was-pictured here ? 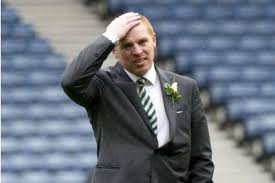 F#CK IT, IM IN THE STANDS THAT MUCH NOO IM JOINING THE GREEN BRIGADE,

Now help me here..”Is this the Mason in Distress sign?”

just been talkin tae ally there, he really disnae know there deed yet

I guess I must the only one who’s equally as disgusted at Commons as the Dutch boy. I just don’t get this with Scotland players and them saying they don’t want to be selected again, you never hear about English, Irish, Spanish, German players saying they don’t want to play for their country. Look at Robbie Keene who’s just pleaded with LA Galaxy to let him fly half way round the world to pull on the Ireland jersey in a friendly!
If I was lucky enough to be a professional footballer I’d be so proud to be seletced to play for Scotland, even if they are pish. What kind of example does that show to the younger guys coming through when the senior players can’t be arsed turning up anymore.
If by some freak of nature Scotland were to make it to the finals of a tournament over the next few years I bet suddenly Commons would make himself available for selection and if he does then I hope Wee Gordon tells him to fuck off.

I will give you the benefit of the doubt and assume that you didn’t see the recent news report where a rather tearful Mrs Commons was talking about the anguish and torment that couples who are unfortunate enough to go through the horrors of miscarriage as a patron of a recently formed charity? I certainly hope you didn’t.

I have every sympathy with anyone going though a personal issue and understand that it can impact your life in the short term but that makes you unable to play for your country EVER again? Scott Brown lost his sister, God Bless her, but he didn’t say that he couldn’t pull on a Scotland shirt ever again.
Frank, if Scotland were on the brink of qualifying for the next World Cup do you honestly think Commons would have said he doesn’t want to play for Scotland anymore?
I just want some honesty from these players who don’t want to be selected, just come out and say that you can’t be arsed turning up to play for your country cos they’re pish and you don’t see any glory days ahead with them.

I can’t honestly say what Kris’s stance would be in the completely hypothetical situation of Scotland ever being on the verge of a WC finals.

Apart from the family issues, Kris is hardly a bouncing fit spring chicken. Over the last 2 seasons he seems to have spent more time in the treatment room than anything and, when he returns to 1st team consideration, seems to take an eternity (like a certain Big Bad John) to get back to full match fitness.

I thought you might have been pleased that Celtic, as well as his family, should be the ultimate winners in all of this.

Then again I am not looking at the situation from a patriotic Scotland fan’s point of view so I can perhaps appreciate where you are coming from to that extent.

is this the same Scotland team who failed to pick Kris Commons for the Wales match until about 6 players pulled out of the squad and only after an intense media campaign? If I was Kris, that’s when I’d have told them I’d retired.

“you never hear about English, Irish, Spanish, German players saying they don’t want to play for their country…”

Outside the countries you mention other players who ‘retired’ from international football early include Dimitar Berbatov, Kevin Prince-Boateng and one of the best footballers ever – Pele! (remember the 1974 world cup!)

Anyway the morale of this is never let the facts get in the way of your story!

What? One game ban ..suspended sentence. Ah want Duff & Phelps the next time.

I dont want any Celts playing international football nevermind going away for a week just to sit on the bench as you watch tits like Kenny Miller vetting a game in front of you.

International football is on the wane. The quicker it dies a death the better

Lenny…”Scotland are shite why are our support arguing about Kris’s decision?”