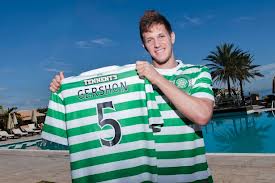 “At some points I have been frustrated , because it has not gone the way I wanted.”

Its Rami Gershon, the defender who is currently on loan at Celtic, and who is also desperate to join the club full time. His agent is in talks to seal a deal. With Efe Ambrose and Kelvin Wilson the managers first choice, and a Charlie Mulgrew to fit in wherever he can, Lennon has not given Gershon a run in the team, but it is hard to see how he can be a step down from the regulars.

Anthony Stokes wants to get his new deal sorted so he can concentrate on his new target of 100 goals for the club. He is on forty six at the moment, with only half a dozen coming this season. So, at that rate he will hit 100 in 2021, which may make contract negotiations difficult.

Oh wait. The Daily Express and its expert football reporters claim Paddy McCourt is leaving, and Stokes is staying. Therefore its Paddy who will get the eight year deal and Stokes will be in the championship.

Graeme Sharp, who used to play for Dumbarton before moving to Everton where he partnered Andy Gray, says that the Everton job is too big for Neil Lennon, and with it being a one horse race up here, he doubts that Lennon will ever get a job in the Premier League. ( Which suits me, to be fair.)

” I would be very surprised if Neil got anywhere near the Everton. He has done okay at Celtic, but I’m not sure he has done enough to warrant the Everton job. Massive though Celtic are, this is a very difficult job following Davie Moyes. ”

Incidentally, Moyes has been allowed to take all the trophies he won with Everton to Manchester Utd with him.

” I think a lot of people  (in England ) are thinking, Rangers have been demoted, Celtic will win the league.”

Unlike in England, where its Manchester Utd will win the league, with Arsenal, Chelsea and Man City in the Champions League.

Sharp then went on to dismiss Roberto Martinez, who  has won more trophies in the last week than Moyes did at Everton in a thousand years.

“Its only six games “, he said. Which presumably were six too many for Moyes.

Sharp and Gray in their time at Everton would have spent many hours chatting. Certainly something to make the long bus trips to matches just fly by.

Two more pre season games have been announced, Brentford away on July 20, and Borussia Moenchengladbach the following Saturday 27th at Celtic Park. The “Bees “, (Brentford) are delighted to welcome the “Scottish champions and their colourful fans ” , but they can’t help but mention the last game between the two. A 2-0 win for the English side, in 1958. One of their websites says

“Celtic fans will have a fantastic day, superb pubs , friendly fans.” Pubs? Is he leading us into temptation?

St. Johnstone and Frazer Wright are to challenge the two game ban the defender was offered for his assault on Mikael Lustig, which given the SFAs track record will see another touchline ban for Neil Lennon.

Meanwhile, the summer panto on the south side of Glasgow continues.

@Charlottefakes is a twitter address for anyone interested in goings on at Sevco. Backed by RTC and Channel 4 reporter Alex Thomson, the site kept many a Celtic fan awake last night as it drip fed more revelations from Ibrox, all hinting at Craig Whytes continued involvement with the club, despite Charles Green and his denials.

This is another audio, which shows Green to be a fibber-something we already knew, but this one is a bit more serious than his Dallas Cowboys and 500 million fans worldwide nonsense.

Then , this hilarious assessment, by Whyte, of the Rangers staff and just where he could make a few savings.

Look for the somewhat more than accurate assessments of one or two of them.

The question is, of course, are they, and others uploaded yesterday, genuine?

Well, the audio clips do sound like Green, which rules out Alastair MacGowan or Jonathan Watson.

What do they prove?

They prove that Green and Whyte worked together to strip the club of its assets.

Or at the very least, they warrant further investigation by the SFA, who we hear are distancing themselves from the whole episode.

Now, there is more to come, and just how damaging it will prove to be is unclear.

But it is having an effect over at the club. They have called an EGM to get rid of  Malcolm Murray, who is probably the only person, according to Charlotte, who can stop the venture capitalists running away with everything.

Walter Smith, the legend, seems hopelessly out of his depth, and looks ready to walk away again. Ally McCoist is even further out of his depth and doesn’t have the faintest idea what is going on, and journalist Richard Wilson thinks it’ll all turn out nice again.

The speed at which this is happening means the end is in sight again. Probably this time it will be a massive firestorm with everybody accusing everybody else of all sorts of skullduggery, whilst the real perpetrators just pocket the cash and head off to an island which has no extradition treaty with Britain.

Shame really. What will we laugh at then?

Meantime, what are these two talking about? 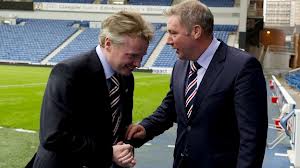 Finally, with Chelsea  winning the Europa League last night, with Ivanovics last gasp header, its good to see that despite Liverpool not winning anything, at least Luis Saurez has tasted success this season.

Did you hear greggs are out of yum yums, lennon told me yesterday!

No Craig..you do the Masonic handshake with another person..NOT with yourself…here let me show you!

Fellow Tim,
You write “With Efe Ambrose and Kelvin Wilson the managers first choice, ……..but it is hard to see how he can be a step down from the regulars”.
It is not hard, the current defenders are NOT good enough – Gershon should be given a run.

Sally – “Haw Whytey, much dae ye reckon we’ll get fur these suits when it aw goes tits up?”

Do you think your jaicket will fit the next guy? Should get one size fits all all from Primark! Aye elasticated trousers as well and i’ve got be honest I’m a big fan of greggs!

did yi hear the wan aboot pat,mick, the minister, and a guy called green

“No seriously, I am the manager”!

“What aftershave is that your wearing Craig ?”
” Essence of Bullshit from Whyte & Green Alastair.”

can I borrow that mix tape you made craigie ,aye the reggae
wan with the liquidator on .it’s champion so it is

“..Mr Whyte,whit are them men in masks doing stuffin cash into those bags in yir office..”

“ahh my simple minded friend,just keep that telly CV up to date.Now would you like a biscuit?..”