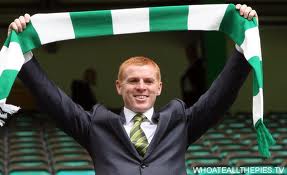 With David Moyes moving to Manchester United, the press have been quick to nominate Neil Lennon for the role of Everton manager.

After months of trying to unsettle players, the MSM have decided to concentrate on the manager. Its almost as though they don’t want him to carry on at Celtic Park. Lennon has yet to say anything, but when he sits down with Peter Lawwell to discuss his own contract, then it might be mentioned then.

Danny McGrain thinks that the gaffer will still be with us next season, though;

Georgios Samaras isn’t surprised by the interest in Lennon;

“I haven’t heard anything but all I can say is that when you are playing at a high level like the Champions League and doing well then for sure people will come and watch the players or the manager or whoever is part of the team.”

Everton chief Bill Kenwright says he will listen to the fans for “guidance”, which effectively means he hasn’t got a clue yet.

Most Everton websites seem to think it will be Malky Mackay or Roberto Martinez.

Whoever it is, it won’t be yet.

Celtic have a title party to look forward to tomorrow, and its worth noting what Lennon had to say about that.

“The titles always get better because the next one is the most important one. My first title  will always be special, but to have back to back titles as manager is great. There are not many who get the opportunity to manage Celtic and there are not many who have won titles, so to have two is a great privilege. It means more as a manger because of all the preparation. You’re bringing players in, developing them and being there for all the games. As the captain, I did that twice with great pride, and those were very good moments as well, but i think you take more personal satisfaction when the players win the championship for you and in the way that they do it. We’ve had a great season, on and off the field, and the progression we’ve made over the past three years has been very pleasing.”

Or does it sound like a man with a long term plan?

Everton are not a wealthy club, and there last boss, who they regarded as a hero, didn’t actually win anything, and they’ve never been in the UCL. Perhaps they like it that way, but they don’t come across as an ambitious club.

And they wear blue, which is enough to put anyone off.

Steve Mouyokolo is on trial with Celtic at the moment. The defender is available for free after he left Wolves in January. He has been injured a lot, and is cheap, so he fits the bill at Celtic. Danny McGrain didn’t seem overly excited by him, when he said;

“He’s here until the end of the week. He doesn’t look strong but he’s tall with a good physique. He’s not a Bobo Balde type. But we haven’t had a game situation yet, defending corners and free kicks.”

Alex Thomson is bursting at the seams trying to get his latest story out, which he says will “break new ground”. He’s giving no clues as to what its about, but when added to Keith Jackson-who always has his finger on the pulse-saying on Talksport he expected more news on Sevco next week, there is definitely something in the air. Something that doesn’t smell too good.

The internal inquiry into ownership and who is pals with who is expected to report any day soon, and whilst a whitewash is expected by most of us, it would probably have happened by now if that was indeed the case.

Reading between the lines, they more likely have discovered something they cannot hide, and are currently working out what to do about it.

They could, of course, try telling the truth, but since no-one over there has any idea how to do that, that option will have been ruled out.

Another former Celt, ex defender John Hughes has been sacked by Hartlepool after just six months. Hartlepool were bottom of League One when he took the job, and seemed to like it there, and next season they will be in League Two.

Anyway, forget about all the managerial moves for now. Its jelly and ice cream time again tomorrow, so don’t let anyone spoil it for you. Thats what they want , you see.

Its been a funny old year in the league, with teams raising their game against Celtic, instead of just plonking ten men in defence. The title has been earned, and finally we can get the trophy, and have another great day out.

PS interesting fact about Everton. Only managers who have played for the club have actually won trophies.

PPS we hear that an excited Ally McCoist leapt to answer his phone yesterday, only to be asked if he’d been missold PPI. 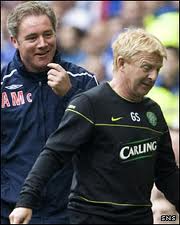 Ally, rangers cudny beat Celtic on the fekin Xbox with you in charge never mind a real fitba match, ya fekin tube.

Ally, we are not having mcdowall back!

Ally, I don’t wanna see u eat ur own nose biscuits go away

Sally is hallucinating from hunger (it had been 45 minutes since he last ate) in this picture, and Gordon’s head has turned into a tasty succulent roast chicken just like in the Roadrunner cartoons.

Sally – “I see a wee ginger nyaff in front of me. Wonder if I should whisper something sneaky in his ear like the cheeky chappy that I am?”
Gord – “Try it Fatboy, and I’ll tell big Bobo that you said he likes Glee!”

Lenny ain’t going nowhere, except to the boozers tomorrow night to celebrate yet another trophy in the cabinet.

I could just go a wee Ginger Nut.

I’m bigger than you, I’m higher up the food chain. Get in mah belly.

Can’t see Mackay going to Everton. His side have just been promoted and have ‘loadsamoney’. Why would he? Martinez could go there, or perhaps to Parkhead to replace Neil. It’s all in the lap of the gods.
Caption: ‘Heard you breakfast on porridge and bananas, Gordon.What are they? I’ll try some in my fry-up ramorra, along wi’ sausages, bacon, eggs, blackpuddin’, haggis, beans and mushrooms. The last two are part of my ‘five a day’. Five breakfasts!

Alley is thinking – if I follow in a successful managers footsteps I might become one, a manager that is and no just a fanny.

Gordon – I’m not going to get in an argument with that idiot. He’ll drag me down to his level and beat me with experience.

No, honest, blacky and temps could do a job for you

I’m really excited about tomorrow’s trophy celebration – is there something wrong with me, because everybody in the media is telling me that it’s devalued.
Going to be a great day tomorrow and hopefully at least another 8 seasons in a row of this before I get bored / feel it’s devalued. In fact, if Celtic win every SPL from now until I die 9hopefully not for another 40 odd years), I don’t think I’ll ever get bored.

Sally ” I still don’t get it Gordon, what is this tactics word you’re talking about? Is that why Celtic are so much better than us?”

ally bursts out laughing. when wee gordon says. ally i think one day your team will go bust.