Celtic yesterday received the go-ahead from the GCC (Glasgow Catholic Council ) to “transform” Celtic Park. The decision means that phase one of the plan can go ahead, which will involve a new pedestrian avenue leading to the ground, a new attractive public space, (handy for kettling fans ) “and the whole area leading to the stadium being fully landscaped, providing an approach to Celtic Park which is  befitting of one of the worlds great football arenas.”

Further developmental phases will see a range of additional facilities around the stadium, believed to be a museum, a cafe, and a few holding cells.

Peter Lawwell was delighted and proud when he spoke of the plan.

“This really is fantastic news for the club, and is something that will allow us to completely transform Celtic Park, providing a stunning new public realm area for the benefit of  our supporters. For so many years, Celtic has been a fundamental part of the East End of Glasgow, this development represents real positive regeneration of the east end, something to which we are totally committed.”

Then he harped on a bit about 125 years, great season on the park and all the usual.

Lawwell then agreed to put some trees in and a bit of a pavement. Most supporters only go there once a fortnight at best, so its hard to believe he’s doing it for us. Glasgow weather means we don’t really need a park to sit in, and its more parking thats needed, not more walkways. Trees, though?  Fair enough on that one. Just what we need, especially with the lack of outside toilet facilities.

This is an artists impression of the area after the work is done, and to be fair, even Jonathan Watson can do better impressions. 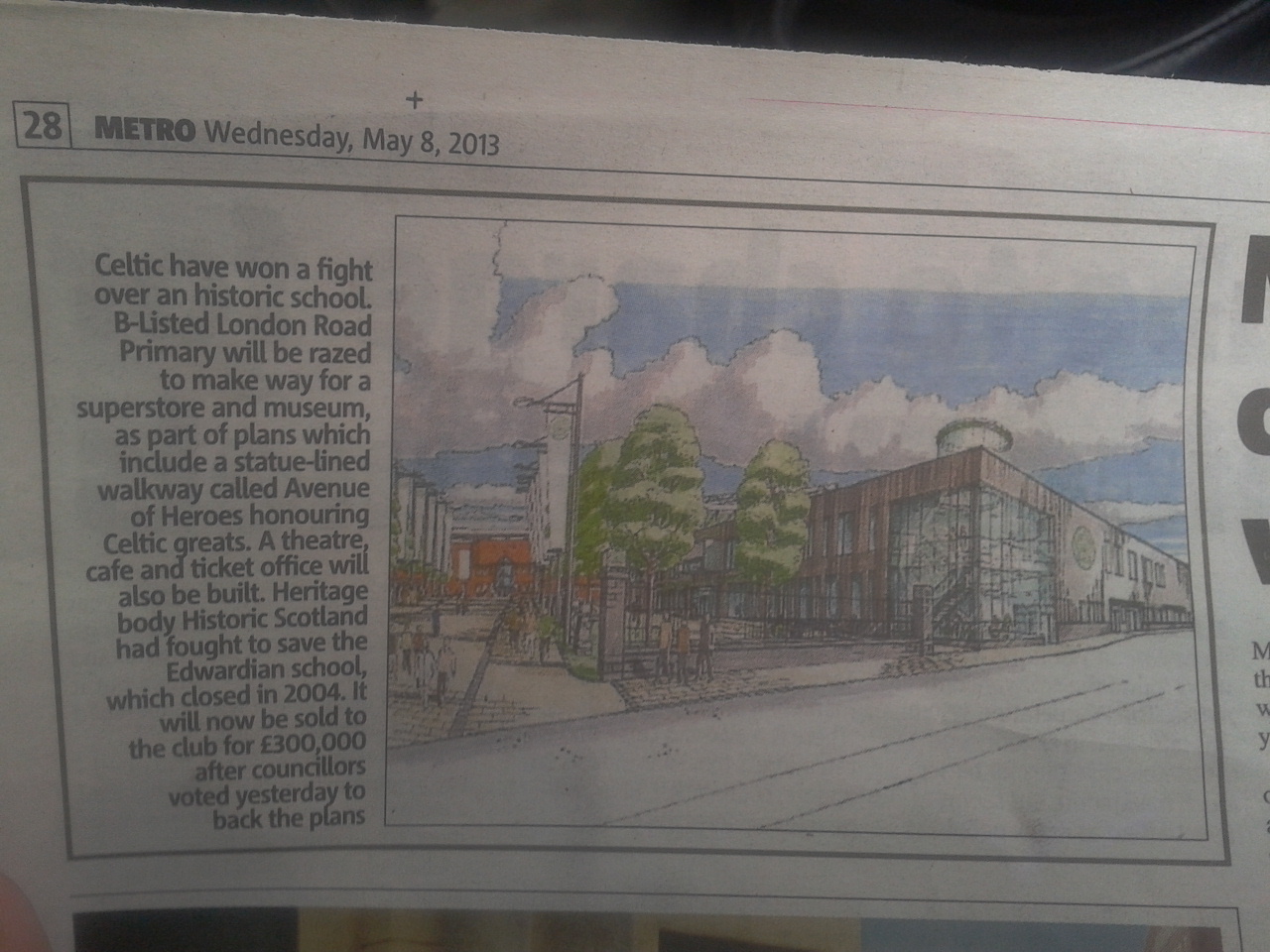 That may be bigger than I expected, to quote Frankie Howerd.

In order to pay for all this, the club will allow 4-14 year olds the chance to meet the staff and play on the pitch for just £65. This festival of fun takes place on May 27, and tickets are on a first come first served basis, so be careful of the rush.

The SFA have shown their faith in referee Willie Collum, who when he takes charge of the Scottish Cup final will have the customary two linesmen, a fourth official, and two goal line refs as well. Thats six people -or one for every three and a half players.

Still, with Collum in charge, then perhaps it will take another five to watch out for his honest mistakes. Oh, wait, Bobby Maddens in there as well.

The SPL clubs have voted for merger with the SFL, and a number of other concessions designed to freshen up the game a bit. There are wee bits here and there, such as play offs and , well, such as play offs, but the key matter, the redistribution of finances , held sway.

Anyway, its party time on Saturday as the League trophy makes the short journey from the trophy room to the pitch , before its put away again for twelve months.  Why we couldn’t have taken it to inverness with us, and done it there is beyond me. If you win a trophy they should give it to you there and then.

Kris Commons made a valiant attempt to stress the importance of lifting silverware no matter how long the delay is;

“Thats the best thing, when you get the chance to lift the trophy. You run around the training field, trying to get fit and trying to work hard, but the moment you grab the trophy, thats the pinnacle.”

Yes, but for us mortals, its another day on the drink, and more damage to an already weather beaten liver. Just shows, the players never think of the fans.

It seems that beer sales may take an unprecedented jump this summer, because second to Celtic winning , is the delight of Sevco, not technically our rivals, but supported and staffed by those who once were, are going through their now annual crisis.

Malcolm murray and Walter Smith, the only two non-venture capitalists on the board, are rumoured to be walking away,  Murray granted, has no choice in his departure, he got a vote of no confidence, but Smith is seriously considering his position, which like most of his ilk, is head firmly between his knees and arse in the air.

All of this would leave poor old Ally McCoist as the lone ranger in an influential post. But even he might be considering leaving, especially now Manchester Utd are looking for a manager.

It seems like the board over there are not only split, but there is a deep chasm between the spivs and the loyalists. Time will tell what happens, but don’t be surprised if when the venture boys have gone, the old true blues try to start a third incarnation-the Real Rangers, and beg to rent Ibrox or Hampden while they get back on their feet.

Look, it really would just be easier to suspend them, investigate them, and then put them in the riddrie flats.

There was talk of a big story breaking yesterday, Alex Thomson of Channel 4 reckons he’s got one , and is trying to get it up to the post. However, with Alex Ferguson retiring from Manchester Utd, the media will just be talking about him today. Which means if Sevco are going to break any more bad news , this is the day to do it.

Transfer -wise, Charlie Austin of Burnley has been mentioned again, and so has Luke Murphy of Crewe. Oh, and Kevin Doyle. All of which means there is very little going on, except perhaps-and who would blame him- manager Neil Lennon is waiting to see the outcome of the Fergie merry go round? He did have a long chat with Ferguson some time ago, which many took to mean he was after Wanyama.

Was he sounding out our own manager, to be his replacement?

Now that really is internet shite. Or is it? 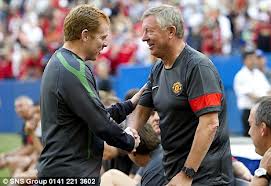 You have to watch these handshakes, you know.

Or other hand gestures. What is being said here? 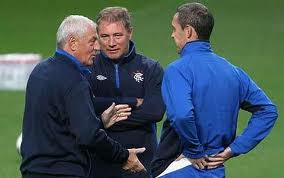 I won’t be happy until the Main stand height is increased to the same as the other three. Everything else is cosmetic. Neil for Everton when Moyes goes to Old Trafford?

Do you two want to come back to my place and you know!

Watty – “Nae wonder yer back’s nearly broke there Davey, I have heard he’s got one this size!”

Watty – “Looks like ye’ll be pulling on the jersey again soon enough big Weiry, for I am holding in my hands Sally’s transfer ‘warchhest’ fur next season.”

So let me gwet this straight, the Scottish league set up is going back to what it was up until 1998? And this is a move forward?

“We don’t do walking away”….Baws! The only person thats done more walking away than Sir Walter is Bruce Banner.

This is as close to A Clap as Ally will ever get!

Cardiagan: Ah ya shoulda seen it… a big stack a side letters this tall…shredded in 2 minutes.. brilliant, the taxman has nothing on us now.. all our troubles are over boys

Kick his bloody legs no the ball. We don’t play that tippy tappy shite here son!

The secret handshake involves you putting your todger in my hand …

Walter ‘Davie this is the size of a normal prick, but, what ally means is you are what is called a big prick”