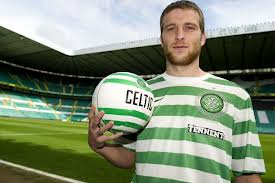 Adam Matthews is back in training, and hopes to feature against St. Johnstone , when Celtic will finally receive the SPL trophy.

His thoughts are more concerned with a possible start in the Cup Final;

“Its been a great season so far so hopefully we can finish on a high and get the win we need.   ” He then went on to speak of the chance of doing the double;

“It’ll be brilliant. We haven’t done it for a few years , and with the Champions League win as well, if we can top it off with the Cup, we’ve had a great season, we know that.”

Must have lost something in the translation. However, its his turn to be linked with a return to his old club Cardiff, who have just been promoted to the EPL;

“I’ve enjoyed every minute I’ve had here, so I’m not looking to go any time soon. I’m happy for Cardiff and what they have achieved, but my focus is with Celtic.”

But denials such as this do not deter crusading journalists desperate to fill their pages. Liverpool have joined Southampton in the hunt for Victor Wanyama, another who has said he isn’t going anywhere, and of course, there is the talk that manager Neil Lennon could be away, with Owen coyle and Martin O’Neill ready to fight it out for the job.

Shaun Maloney will likely leave Wigan this summer, as his manager thinks he should be competing for titles, and another former player who could be on the move-if he doesn’t get the jail, is Aiden McGeady, who floored an opponent in a recent game for Spartak moscow, before smashing up the dressing room door in a fit of anger.

“He was crushing anything in his way” said one witness. Clearly upset at something , McGeady should come back amongst his ain folk.

With Celtic being ignored in the PFA awards, its good to see family club striker and player of the year Michael Higdon setting an example for youngsters after he was arrested in a nightclub and charged with assault.

“Its still the best day of my life” he remarked, and blamed the fact he thought he was still on the pitch for his violent episode.

With Leigh Griffiths taking the young player award, who himself faced allegations of shoplifting at a Tesco store, its good to see the image of the game get a lift.

League reconstruction will be discussed again today, with next seasons  ten first division clubs seeking to set up an SPL2 league, and move themselves further away from the toxic Sevco brand.

David Longmuir, the man who lives with Rangers fans, presented the third division trophy at Ibrox last Saturday, and must by now have come down from that high, as he realises his Football League is falling apart. Whatever is decided, it needs to be decided quickly.

Speaking of that game, these are the tickets for that world record crowd we spoke of yesterday 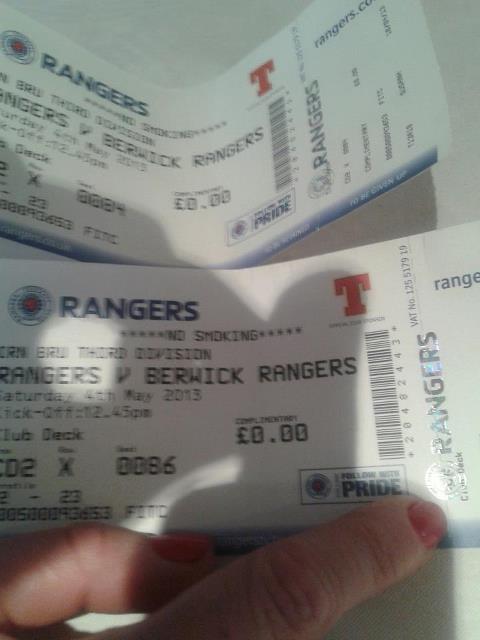 No wonder they have no money in the bank, but it does explain the large turnout. Thanks to Trish for those. Apparently they are being given to schoolchildren, and with the removal of corporal punishment, its good to see that kids can still be punished properly. The BBC , of course, would have given cash for them They were all banned from the game after criticising the vision for the future document which leaked out of Ibrox last Friday. The document, which wanted Johann Cruyff  to coach the players, in the style of total football, which would reslut in a European trophy by 2020.

No-one knows who wrote it, but the man behind the ban, James Traynor, is probably the author, reacting in the way that fat people do when others laugh at them.

Celtic have declared their family fun day out a success. A large crowd of around 15,000 turned up at Celtic Park yesterday . There were chances for fans to take part in competitions with the players, a training session to watch, a fairground to play with, and a display of samba dancing by some schoolchildren;

“Adding to the dancing on display was an energetic Hoopy the Huddle Hound, who delighted younger fans with his own routines.”  I think the word traumatised would have been more accurate in that sentence.

Reminds me of the time sitting in the Stadium of Light, watching an impressive pre match display from the mascot Eagle.

I told the benfica fan next to me, that he should come to Celtic Park.

“We’ve got a man who dresses up like a dog.”

Meanwhile, Celtic supporters will be watching for news today of further developments over at Train Wreck Rangers FC.

Rumours of stock market suspension , legal action, pension plundering and disputed ownership have led thousands to believe that something may happen today.

So far, twitter is reporting that chairman Malcolm murray has lost a vote of confidence, and will be walking the plank very soon.

This comes from Chris MacLaughlin at the BBC, but there is, as of the time of writing, no confirmation of this.

Manager Ally McCoist proved he has still got it when he appeared in a charity match yesterday, which may solve his striking problems for next years second division campaign. 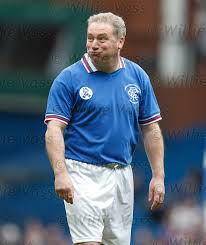 whilst another former player realises just how bad things are at his old club when he discovers his shirt hadn’t been washed. 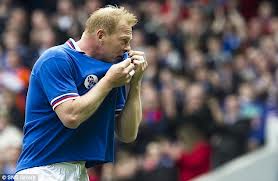 Nacho Novo, the man who turned down a chance to be understudy striker at celtic for a glorious stint at Rangers, has said he would love to return to his old stomping ground. He says his family are still in Scotland, and he wants to come back.

His family were unable to be contacted for a response, as they have been on the phone to estate agents all morning, desperate to sell the house.

Many a chuckle from yesterdays replies again, and unless your name is Efe Ambrose, you would have enjoyed reading them.

Now, did anyone catch what was being said here? 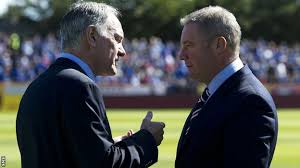 I’ve still got some room in me ‘elicopter, di you want me to put in t’ word for ya?

I promise thee….just shake my hand and everything will be okay by April 2013 Ally lad!

how does that handshake go again

planning approval granted this morning for demolition of the school and construction of new superstore.

No ally, let’s start again. There was a Sevco, then another Sevco but still the same club although different to the first company…..

Can I get you a pie?

For the Fat Sally picture: “Aye, I think I could cram in another pie or two.”

if you want a Greggs baguette Ally…. tis i will sign im for ya…..is he that striker at Real MaBarca ?

Stand really still Ally, don’t make any weird faces or anything else those fenians at Etims will have a caption contest bonanza!!

I will go first, then imran, Malcolm, Walter and then you. I’ll be waiting for you on the island