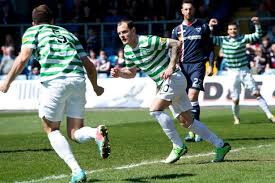 ” It is hard to play football on that pitch, it was dreadful. ”

Johann Mjallby speaking after Celtic dropped a couple more points in Dingwall after a 1-1 draw yesterday.

The big Swede also bemoaned the terrible decision, or honest miostake, that saw Tony Watts goal chalked off for offside late in the first half.

“I have seen it on television, and it clearly wasn’t offside.”

Oddly enough, his wife declined the offer of going out for a meal with him last night, choosing instead to watch re-runs of Casualty, which would have been far cheerier than sitting with the big man.

Looking back, the fact that the referee showed  no yellow or red cards says a lot about how competitive the game was. The wind, the pitch and the lack of cohesion between the Celtic players all had a part in the outcome, but more importantly, no-one wanted to get hurt and rule themselves out of a Cup final. Although Efe Ambrose, in midfield, may have done enough to make sure he never plays there again.

Poor Efe. We always need a scapegoat, and he’s getting his shot as a target just now. First seasons are always the worst, and maybe he’ll settle down in time for next year. He has an international winners medal, so there must be more to him than we have seen. Surely?

BBC Sportscene showed the league scorers table in its customary Top 4 format, which helpfully excluded Gary Hooper, currently fifth, allowing them to mention the lack of Celtic players at the top end, whilst ignoring the all competitions chart altogether.

They do try, don’t they?

Allan Johnston of Queen of the South won the PFA Manager of the Year, which was a bit of a surprise, but at least it spreads the glory around a bit, and with Michael higdon being named Player of the Year, that should boost the coffers of Motherwell, who will no doubt receive millions of pounds for him from a crack European side. Although to be fair, he has beaten Willie Pettigrews club scoring record, which for those of us old enough to remember Pettigrew, will mean a warm glow at the thought of the smile being wiped from his face. The way he used to wipe the smile off ours every time he played against us.  Pettigrew always seemed to score against us, and to be fair was a more than capable striker. Just not a favourite of mine.

James McCarthy-or McArthur, well one of them, has been linked with a multi million pound move to Celtic in the summer, by a reporter who clearly hasn’t done his research. £7m is the figure quoted, which means it isn’t going to happen.

Especially as £7m would buy a lot more quality than whichever Wigan midfielder is available. Kevin Doyle of Wolves has been touted as well, with his side being relegated to the third tier of English football. Although he has been a target in the past, his move to Celtic in August depends on us being able to find a club to loan him out to in September.

In what will probably be the last time you see anyone connected with Sevco Rangers smile, the newest kids on the block were presented with the Third Division trophy on Saturday. In front of a world record crowd-I know, I know- manager Ally McCoist and his son proudly took the plaudits of the crowd and the rookie boss earned himself another year in the job when he announced “We are the people”, shortly after his son had called him a “weirdo”.

These big crowds over there are something to be proud of. After all, there is a recession on, and it does the bears proud to be forking out to see what is essentially a shadow of the great teams of the past.

Even though a considerable number had the £0.00 price tag on them, and I did have a picture of this sent to me, but , computer genius that I am, i’ve lost it. So here is a picture of  a brcaelet, which will be the next big thing down Govan way 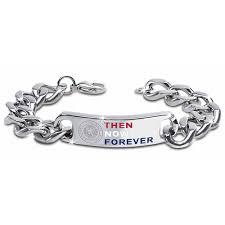 Yours for about three quid, or you can just wait to pick one up at a car boot sale in a couple of years.

Interwebland is alive with rumours that the train is finally about to hit the buffers in Sevcoland. The Stock Exchange are about to suspend them, the club are skint again..etc. Interestingly, there are no new season books or shirts on sale yet.

This time, saying that “we are the people “, or “no surrender ” won’t be enough. In fact, a forming a chorus line of management and staff  singing “Feck the Pope and the IRA ” in front of the Copland stand won’t be enough this time.

Elsewhere, Dundee were relegated after a draw with Aberdeen, and you kind of feel sorry for John Brown, who at least had us hoping St. Mirren would go down.

Wee riddle for today-whats the difference between the SFA and north Korea?

One is run by a corrupt, money hungry dictatorship, and the other is in Asia.

Can someone tell me what fatherly words of advice are being said here? 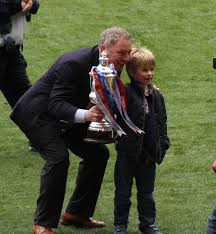 “Go and start the car, I’ll shout “We are the people” and then we’ll make a break for it.”

Aye son keep smiling..I know it’s one step up from the diddy cup..but it’s ours. Never mind how much it cost to win ..it’s ours. WATP.

‘ Nae jelly n ice cream for you wee man for calling me a weirdo’! 🙂 HH

One day son aw this will be yours..
Better give it to me noo da cause its going bust again Tuesday..

After me son GREEN and WHYTE SHITE

Aye, they are weirdos, but they are our weirdos.

I have to disagree and hope Efe isn’t here for next season they guys just a poor imitation of a footballer for me and if I was kayal et al I’d be looking for a way out Celtic if he’s getting a game in midfield before me. Neil is the man to lead the club for me but some of his selections leave me bewildered at times.

I was just trying to be nice. I would rather phone my mum and ask her to stand in at right midfield.

Agree with Feed the Bear, time for Ambrose tae hing up his bits
never ever should he pull oan the hoops again..

What was different about yesterday’s trip North was that Ross County did not have ICT’s big highland heifer (it even rhymes with him) loitering in the penalty spot booting/barging everything that looked like a football player than came near him, yeah what became of Ross Tokely.

Maybe we should play Ambrose in his international position, right back although he ain’t better than Matteaws.

Why did you call the Wee Angry People?

“The postman is your father …”

If you have any sense son you,ll be a bin collector or something like that,at least its a step up from this lot,and thats exactly where this tin cup belongs the bin