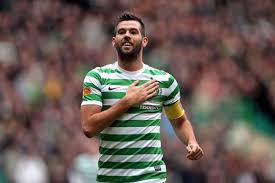 After a week in Dubai, Joe Ledley has returned to the fold, and has poured cold water on stories of his return to Cardiff;

“I don’t know anything. I haven’t spoken to my agent, all I can do is concentrate on my football and hopefully stay at Celtic. In pre-season I can sit down with my agent and with the people at Celtic and hopefully come to an agreement. The majority of players would want to play in the Premier League but you have the opportunity to play in the Champions League at Celtic, the best competition in the world, and the majority of players would want that.”

Thats the sort of attitude that we want in players. He plainly loves it at the club, and doesn’t see any reason to move. When Lennon spoke of building a team around a few mainstays, its clear that Ledley wants to be one. He told us why;

“I have never witnessed a club like it. You go away and play an away game, and they take over three stands. It doesn’t seem right, but thats how big the club is.”

Theres a chance for your child to be the mascot on Cup Final day, a prize which comes with a couple of tickets as well, in a competition on the official website. With tickets likely to be at a premium, its maybe worth entering. Doubt if I’d convince them I’m six years old , though.

After all the hullaballoo over the PFA nominations for player of the year, the eyebrows were further raised when the team of the year was announced. Celtic have four players in the eleven named, Adam Matthews, Kelvin Wilson, Charlie Mulgrew and Victor Wanyama. Matthews has been injured for a while, Mulgrew doesn’t have a fixed position and Wilson, whilst much improved-possibly a reason for his inclusion-is at the heart of an extraordinarily fragile defence.

Wanyama , of course , has had a great season, making a name for himself at the highest level, and is included in a midfield with Andrew Shinnie, of Inverness, and Nicky Law of Motherwell. No disrespect to either of those two, but one is rumoured to be heading into SPL2 obscurity with Sevco Rangers, and the other is off to Birmingham. Neither would get near a place at Celtic alongside Wanyama.

However, this time Neil Lennon has not spoken out. I think he’s probably speechless. I was.

ESPN will be covering the trip to Ross County on Sunday, its a 12 noon kick off, and after losing up there last time round, a good result to try to build some sort of momentum for the Cup Final is needed. One player hoping for a shot is forward Bahrudin Atajic, the 19 year old Swede who has his origins in Bosnia.

Having recently picked up his new club suit, he’s been on the bench a couple of times of late, and is hoping to get a run out to show what he can do.

In an interview in the Herald with Stewart Fisher, who yesterday said all the youngsters had a lot of work to do to make the grade, the interviewer mentioned comparisons with fruitcake Swede Zlatan Ibrahimovic.

Now, as a young Celt from Sweden , there may also have been a couple of Swedes who perhaps inspired the forward when he was younger, maybe even helping him choose Celtic, but no mention of them. The youngster said;

“I have been compared to Zlatan Ibrahimovic quite a lot , but I don’t mind. We are all special individuals.”

Great. He talks like Ibrahimovic. Show the guy a couple of Larsson dvds. Please.

BBC Scotland has agreed a new three year contract to cover SPL matches. Well, highlights, radio commentary and so on. Well, highlights is not quite the right word. Bumbling fools in a drab , uninspired studio shown on a Sunday after the kids have had their bath and gone to bed as they have school in the morning is perhaps a better description, but they couldn’t fit it on the page.

These days, with streams and mobiles, anyone can access the game. Either live, or via forums. By the time the Sunday night show comes around, it cannot help being stale, which makes the presenters job of sounding enthusiastic doubly difficult.

Supporters have already seen the goals, already discussed the talking points, and are already talking about the next game.

Sportscene isn’t a great show, but at least it tries.

The SPL should have insisted on the show being aired on a Saturday night. Preferably around sevenish. When the events are still fresh in the mind. Those not at the game can see it, those travelling can record it and watch it when they get in.

Show it instead of the lottery show. Its not like you’re going to win, anyway.

Post-Rangers, this was a golden opportunity to promote the game , especially to youngsters who are bombarded with EPL news  and matches. Highlights on a Saturday, and a preview on a Friday. If the game does indeed die in Scotland, it won’t be because Rangers have, it’ll be because the people running it haven’t got faith in their own product, soomething even a snake oil salesman has.

Which brings us to Charles Green. Admit it, you’re missing the big lovable Yorkshire lug.

£2,500 he has been fined for his racist remarks about his pal Imran Ahmed (surely Im Ran away?) but cannot be found for comment or payment. Sevco have taken the low fine as an indication the SFA thought his comment “ill advised” rather than racist.

And the re-writing of history continues… Green is not racist, just badly advised.

Something else is stirring down in the bowels of Ibrox. After an appeal to supporters to bring along flags, confetti and so on for tomorrows title party (pauses while readers laugh at this scenario in their minds eye) , it could also be that this is the new clubs last ever game at Ibrox.

Reliable twitter sources are now claiming that Chairman Murray has privately acknowledged that Craig Whyte does have dibs on Ibrox and the other assets, and unless around £30m can be found, then the club will be homeless next year.

Might be the real reason that the new season books are not on sale yet, seeing as how they cannot guarantee to fulfil their fixtures if they have nowhere to play them.

Stop laughing at the back. And the front.

Still, if you believe Radio Clyde, the Lisbon Lions upper stand will be shut next season, even though what is actually happening is that the club can now sell what used to be “special ” season books -i.e. those without the Rangers game on them, as full books. to this end, they appear to be selling from the front backwards, to see if they can shift them.

It also might explain why those who had a special book haven’t had a full £100 discount.

Although there weren’t any special books last year either. Which renders the girl in the ticket office full of nonsense.

Or I could be getting mixed up again. I’m getting on a bit.

Now, I’m fairly sure this was the moment when Walter Smith told Neil Lennon that Ally McCoist was getting the Rangers gig. Does anyone else have a better line? 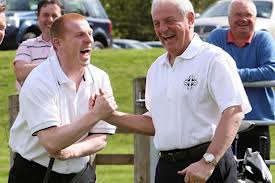 ”This is my special ‘Hugh Dallas’ handshake, Neil.”

Ya kidding me on walter, ally actually thinks there still the same club aswel, whata tube!!

what ? Sally is going to be the Manager ffs

There was special season books last year, those with those tickets didn’t get to the games against Dundee unless they bought tickets for the games seperately

That explains a lot. Cheers.

“Have you read John Brown’s school reports as well? Priceless!”

“Don’t look now, but that fat c*nt behind you is the spitting image of Jock Wallace!”

“And then Greeny said to me ‘I won’t be leaving until I hear that Champions League music’!”

And she says “no, but that’s a real nice ski mask”

“I just told that man that I’d sell him my club for 2 quid. Muppet thought I was on about my 7 iron”!

“So are Rangers playing home games at Cathkin Park next season Walter?”

“Sportscene” needs a complete revamp…not enough footie….too much talking…..punditry so predictable and a presenter born in the Jurassic period. needs fresh blood….some pretty SSN type burds…..I for one don’t tune in much now….and if I do i’m away as soon as the 3 minute celtic clip is done.

With regards to the Ibrox ownership….Maybe Mr Green was in Paisley discussing a ground share type scenario.

So we’ll get an orc free season and lawell will make sure you get 50k in shares. Aye, his mate whitey will take the flac.

“Ally gonna get sacked on Football manager as well”

“Neil you should have heard what Charles Green called you…..”

Neil I hear Whyte transfered the title deeds to you name

So last year we needed a sap to take the manager’s joab while aw the shit was flying – John Brown knocked us back then guess who walked in?

Never missed a home game all season; cannot travel to away league games because of work; went to Barcelona but cannot get a Cup Final ticket? Also no reduction of £100.00 as promised (£77.00 reduction). Clearly reasons why I should not renew my season ticket but I probably will anyway! Fans being treated very shabbily yet again.

Let hope Joe is well rested, plays a blinder in the final and signs on for at least another couple of years
Keep an eye out for Floriana FC in Malta, a great team known as “The Irish” who always play the right way.
Bartfast

Walter “Sally actually thinks he is the manager of my old club rangers,i never thought anyone was that thick” Lenny ” dae you think we should tell him”?

“…aye Traynor..Jim Traynor!, ye could nea make it up Lenny, its like the feckin muppet show over there..anyhoo who’s on the tee?..”