The under 20 side racked up their fourth consecutive Youth cup with a 3-1 win over Dunfermline last night in front of a decent crowd at Hampden. By decent I mean not throwing seats at each other, and keeping it all good humoured. Much to the disappointment of the media.

The youngsters continued their domination at this level and a huge round of applause goes out to everyone involved.

Of course, the achievement was recognised in the MSM, the Herald , in Stewart fishers report, claiming the youngsters have “much to do if they are to make the grade at Parkhead”

Anyone who calls Celtic Park Parkhead is one for the watching, in my view, as it usually means they don’t go there very often, and try their best not to mix with the folk that do.

The other side of the coin comes from the Scotsmans Alan Temple, who spoke gushingly of the “cutting edge of the ruthless youngsters”, and gave special praise to winger Paul George and his “dancing feet”.

Manager John Kennedy was rightly proud of his lads;

“On nights like that its about developing the mentality side. Can they come and handle the big stage? Can they handle the final? Can they come and win? Thats the crucial thing at Celtic. There will be a couple of them who have caught the eye of the fans and of the directors and the chief executive who were watching. Its about taking the next step now and going and performing.”

One interesting side note is that eight or nine of the Dunfermline side-depending on which report you believe-have featured in the cash strapped Fife sides senior team this season, so credit has to go to the youngsters for that as well.

Not such good news from the CONCACAF Champions league final, where Monterrey beat our brother club Santos Laguna 4-2, which means they will be in the Club World cup next time round.

Back to our own senior side, and Neil Lennon reckons its worth “sacrificing ” a few league games to allow for forward planning with the Cup Final and the pre season already looming large on the horizon;

“We are the champions and must not forget that. The league is done and dusted. You don’t like losing games but we have to give the squad players an oppotunity now the main games are over.”

He didn’t add that he thought they were all useless, but he might as well have done in what was possibly the least inspirational speech since an Italian captain told his keeper to just let it go in one night in May 1967 in Lisbon.

“Its healthy to have this competition (for squad places)” but didn’t fool anyone.

It has affected winger Dylan McGeouch, who is looking forward to avenging the defeat the last time Celts went to Dingwall. He said;

“I started that game and we were up 2-0, but we lost sloppy goals and they came back and ended up beating us in the last minute. Hopefully we can go up there , turn it around and get a positive result. They are big, physical and a good team. They have good players. When we were up there the pitch wasn’t the best either. We know it will be a hard game but hopefully we can get the three points” he said, and thankfully stopped talking, as he seemed to grow less confident as the interview progressed.

According to the Sun, Norwich will make a £4m bid for Gary Hooper this summer, which shows they haven’t quite got the hang  of haggling, having had larger bids turned down in January. Its not even worth answering the phone when they ring any more. Stoke and Everton are also believed to be watching developments, which will have Hooper all excited.

Fiorentina midfielder Adam Ljajic is on “Neil Lennons radar”-remember, the one which Rangers dropped off-as  the Serbian has refused to sign a new contract. 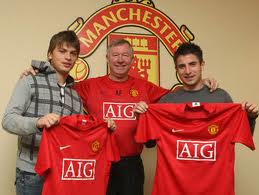 Back in 2009, Ljajic joined Manchester United, but was sent back to Partizan Belgrade on loan. Uniteds teetotal manger Alex Ferguson decided not to keep the youngster, and according to reports in his homeland, it sent the lad into “psychological shock”

However, he seems to habe recovered from the trauma of Manchester and joined Fiorentina for 8 million Euros in 2010, and exactly one year ago today, when he was substituted in a game against Novara Calcio sarcastically applauded manager Delio Rossi, who then grabbed him and tried to punch him. This cost the boss his job immediately after the game, and do you know what, I like the kid already.

Apart from Scott Brown and his twitter antics,( Did he really spell Barcelonas midfielder “Messy”? )  Celtics current side is devoid of personalities, such as Jimmy Johnstone, Bertie Auld et al, and a wee bit of Ljajic might just be the thing to put bums on seats.  His international career has stalled after he refused to sing the national anthem before a May 2012 game against Spain. The anthem, “God of Justice”, is related to the Serbian Orthodox Church, and its believed thats why he didn’t sing it, despite signing a code of conduct for the national team that says he should.

But is he any good?

Well, he scored twice against Inter Milan in a 4-1 win back in February, and if we can get him at a decent price, then we should go for it. And then sit back and watch the fireworks. 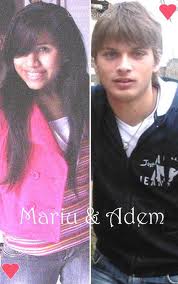 And his girlfriend is quite cute.

Speaking of girlfriends, Fraser Forster got a bit of a shock when he found out his girlfriend Leah Totton will be on telly more than him in the next few weeks. She is a contestant on Alan Sugars thirteen week advert “The Apprentice”, where she will compete to win a £250,000 investment in her business, believed to be a school where tall people learn to catch things.

May is only a couple of days old, and all sorts of strange statistics are being put around. For instance, in last nights Champions League game, Bayern Munich had two shots on target and scored three times, which is the sort of thing Old Rangers used to do when Hugh Dallas was the ref. Another bizarre fact concerns former Celt Ki Seung Yeung, who is the best passer in the EPL, with a 92.7% success rate. Mainly because he isn’t passing it to Gary Hooper any more.

John Brown of Dundee has been named manager of the month for April;

“I think I just gave the boys a bit of belief and organised them in a way that gives us chances. We’ll have a go at every game , try to create and score goals. We’ve managed to do that in every game and thats pleasing” said his speechwriter.

Some great suggestions in yesterdays picture quiz, none better than the one from buyhiselllowgreen, who still has me chuckling.

Jose Mourinho has ruled out a move to Celtic, saying he will go somewhere where he is loved, presumably meaning he will disappear up his own arse.

But what is he doing here? 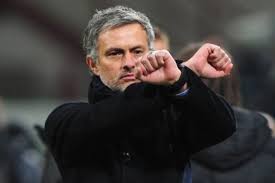 Huge well done to the young ‘uns last night. Here’s hoping we may be seeing a few of them gracing the 1st team in the near future.

Doing a ‘Barry Ferguson’, the only time I’ve ever seen a player do that and not concede a penalty or foul.As seen in the 1-5 game when Flo had just signed for them, after the 6-2 game in 2000. Should I be surprised?

He is signalling that he is going back to England to appear on the X Factor.

Listen Fatboy, you’re team is EXTINCT, cease to be, no more, Morto ! let me spell it for you…..

I am off on holiday tomorrow for a month so short of time. I just wanted to make sure you were not writing an obituary next week. You will simply have to wait a little longer to slag me off. I am off to Ireland for 4 weeks so you can have peace and quiet for a bit at least. Mind you, there may be internet access where I am going and if so, you may have a few interruptions.

Today’s diary will keep me smiling during the journey and beyond. There were some crackers in there. I am stuck for time or I would expand. What is the big sigh for? Thanks for a terrific season and I look forward to some pre-season exercise when I return in June.

Jose: Not too tight, officer.

Let’s see how you deal with this move Ferguson.

H H everybody and here’s to a celebration on 26th.

Have to say Ralph that I call the home of the champions Parkhead. Stewart Fisher though?? No need to check his credentials!!

That’s Mourinho giving us a rendition of Xzibit’s seminal hit from the year 2000 “X”.
Really it’s him claiming that Inter were being harshly treated by the Italian football authorities hence the “handcuffed” gesture

I call it “Parkhead” also, but the agian there’s no Celtic bus leaving from Sydney Central beach each week.

Murray,Whyte,Green what is the differance they should all be locked up