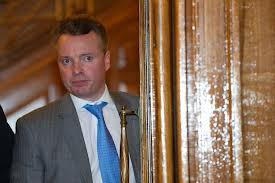 (This was originally written first thing Saturday morning. but i pressed the wrong button.. Apologies.)

The SFA have finally acted on the long running scandal that is set to destroy the image of Scottish football throughout the world. Neil Lennon has been charged with being in the “playing zone” within fifteen minutes of the end of the game against Motherwell at Fir Park.

Kenny Shiels has also had a tug for his comments in a radio interview, which led to a public slanging match with the Celtic boss.

Nice to see that the beaks are fully in the “reality zone”, and dealing with the real issues surrounding the game up here.

Meanwhile, their heads remain fully in the sand as the real problem over at Ibrox hurtles toward a conclusion. Twitter and other social media were alive with rumours of a stock market announcement on Tuesday concerning the shell club Sevco, set up to fleece anyone daft enough to invest in it while it was , with the support of the Scottish MSM, pretending to be the diseased club Rangers, which went into liquidation owing millions to just about everyone.

Alex Thompson, the Channel 4 journalist reckons that in a few days, the “lid will be blown on the Sevco shenanigans “, but it will be oo late for thousands of small investors who have lost their money.

Not to worry though, Craig Swan of the Daily Record has had a brilliant idea to save the new club. He thinks that Celtic should lend them some money to see them through their current difficulties, so that they can return stronger and save the Scottish game. He cites the example of Bayern Munich bailing out rivals Borussia Dortmund, implying that if the Parkhead side do this, then it will naturally follow that there will soon be a Celtic-Newco European cup final, and Scotland will win the World Cup.

Every month or so, there is a meeting at the Record, where circulation figures are discussed, and new ideas are put forward to improve the papers performance.

If they were to ever read the sports section, without blue tinted glasses, the answer would leap out of the page at them.

Back to Thomson, as he sparked a lively debate last night when his latest blog slammed small minded football clubs for banning reporters who said things they didn’t like. Clearly getting the wrong end of the stick, he mentioned Hugh Keevins, who after his article on Sean Fallon, was told he was no longer welcome at Celtic Park.

Strictly speaking, he was told he was having his press priviliges withdrawn, meaning he’d have to pay to get in, a sum which would alomost certainly be re-imbursed by his paper. but Keevins, noted for his lack of fairness and accuracy-two fairly important things for a journalist-chose to rant instead about not being able to do his job. Some , of course, would argue that he hasn’t been doing his job for years, so why all the fuss?

Thomson does have a point , though. If hacks weren’t afraid of being ostracised, then maybe the scandal at Ibrox would have been exposed before the bad guys ran off with the money, but he just chose the wrong example.

Anyway, back to the football.

Kris Commons and Joe Ledley are amongst those back from their week long jollies as Celtic try to avenge the defeat they suffered the last time they travelled to Dingwall. Kelvin Wilson and Efe Ambrose return, but Samaras, Hooper, Mulgrew , Izzaguerre and Forster all miss out as it is their turn for a break.

It will be next season before we see if this policy has worked, at the moment its fair to say they would have been rested anyway, so sending them on holiday seems sensible enough. If Celtic don’t win the cup, or fail to qualify for the UCL group stages, then the blame will be aimed at this decision, though if it goes well, Lennon will be hailed as a visionary.

Thats if he’s still here. Twitter and other sources of bollocks reckon he’s for the off. This in the week that he’s in front of the beaks again, and been on the end of another “theres a bullet in the post for you ” tweet.

It must all seem very tiresome for him, but he’s never been one to walk away, and we can only hope he’s not going to do that now.

Last week, the Sunday Mail led with this 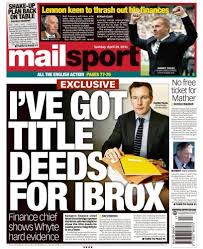 But never showed this 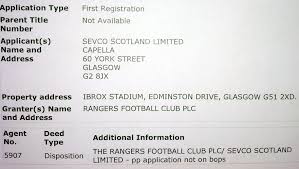 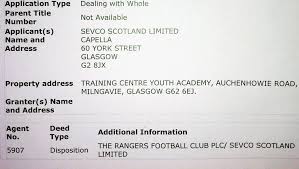 Which is worth a coffee and a read.

So, who owns Sevco Scotland? Certainly not whoever the fans invested in.

Even more bad news for the Rangers. Their flag display for todays title party has been ruined by the weather. But the big parade is still on 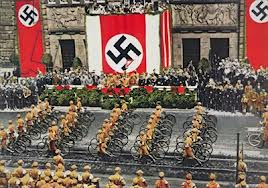 Once agin, there were some laugh out loud moments in the picture quiz yesterday, my favourite was the one where Smith said Chucky had told him he wasn’t leaving until he heard Champions League music at Ibrox.

So, one more for today 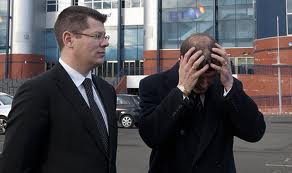 You can certainly hope he doesn’t walk away, I’m praying he does!

We lied and cheated to let the sevco liars and cheaters into the league. Looks like we are going have to pull the same stunt again.

OK is that agreed Stewpot? Hunz into SPL..St. Mirren out? That’ll teach Gilmour who is boss! And of course you inform UEFA that Ranjurs will be in Champions League…that’s Celtic sorted out as well! Fancy a pint?

whit they banned the bbc

the tardis wis our only chance !!!

What do you mean its not the same club?the record told us it was its all I’ve been reading since I arrived in scottyland.