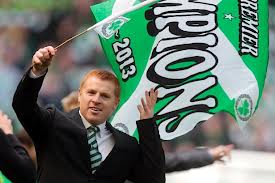 After the Firhill riots the other night, the police have decided to study CCTV footage to find out what happened. This policy of letting everyone get on with it, and then identifying culprits later, is a new concept, and makes you wonder why they bother having the police present at all.

This came to light last month at the English Cup semi final as police hid in the tunnel while Millwall fans hit each other until they noticed the police, and then threw things at them instead.

As one of the comments on yesterdays diary pointed out, perhaps they would like to pay attention to which seats were already broken before the game. Thats not to condone anyone who did break any seats, but it would be nice just to have an accurate and fair indication of what went on. Then punishments can be decided on.

“We are looking into last nights match in more detail, with all the relevant authorities, and clearly will deal with any issues appropriately.”

Equally, the word from Sevco Rangers was ;

“The club will assist police with all their enquiries. ”

Something they are probably used to saying by now.

They have appointed a QC to oversee their internal investigations, and he is Roy Marton, who previuosly has worked for Ressponse holdings, who were owned by David Murray, who sold the club to Craig Whyte, who in turned killed it and sold the body to, er, himself, via Charles Green, who made way for Craig Mather and Dave King, who will sell it back to Murray. Probably.

Manager of the Year now, and along with Neil Lennon, the nominees are Terry Butcher, of Inverness Caledonian, who have had the most successful season in their history, Allan Johnston , the Queen of the South boss , who won Division Two and the Ramsdens Cup, and Stuart McCall, who led his Motherwell side to a humiliating defeat at the hands of a Third Division team in the Cup.

Kenny Shiels, resident expert on BBC Radios Scotlands Sportsound, chose McCall as the top candidate, because he hasn’t got players as good as the ones what Lennon has, and althoguh Motherwell hadn’t actually won anything, he deserves it.

He then went on to describe Celtic as a “monster” with a massive influence on the Scottish game, pulling back only when he was in mid rant about the game being tailored to suit them. Even Roddy Forsyth was shocked.

We trust that the SFA will be asking him to pop in for a chat and a ban soon, but lets not hold our breath. Wouldn’t want to fuel Shiels’ “Unseen Fenian Hand ” fantasy, and to be honest, they wouldn’t get any sense out of him anyway. No-one else has.

The BBC,  shortly afterwards, announced that all guests on the show will be breathalysed beforehand to prevent it happening again.

There was , sadly , no nomination for Ally McCoist, the manager of the newest team in the League, who despite severe resytrictions on his capability to manage, took the clubs first trophy at their first attempt, armed with a playing budget which is just a fraction of that of the United States military.

According to the Daily Express, Neil Lennon will escape censure for his post match chat with Euan Norris at Fir Park on Sunday, but since its the Express, theres probably a charge letter already on the gaffers desk this morning.

Instead of watching tippy tappy football on the telly tonight, why not nip along to Hampden for the Youth cup final, where Celtic face Dunfermline, and its just £5 and £2 for kids to get in? Its a cash gate, which has to be worth the trip for the nostalgia value alone, and the lads deserve your support. (Not mine though, its bloody miles away.)

Santos Laguna, the “brother club” from Mexico have their CONCACAF Champions League final second leg tonight, they are away to Monterrey, and its 0-0 from the first leg.

Theres two games, thousands of miles apart, where there is a chance to see Celtic stars of the future.

There might not be a future for Heart of Midlothian.

Although the club say they will “continue to trade normally”, the rumours of an insolvency event won’t go away. Hearts are allegedly £25m in debt, keep forgetting to pay players, and used to have Campbell Ogilvie as chairman, the latter ensuring a whole new meaning to the words “trading normally”

One theory is that they will stumble on to the end of the season, before entering administration and trying to get credoitors to accept a CVA, and then begin the long road back to stability. Good luck to them, if they try the honest way out.

Something that Dunfermline have attempted to do, whilst Rangers just said sod it, went under and then miraculously re-appeared as Lazarus FC.

Theres a bit of a row looming, or certainly a discussion, on who wears what strips for the Cup Final. Its a big occasion, and both clubs should be allowed to wear their traditional outfits. Its not like we are watching in Black and White anymore. Though some of us will be viewing through a sort of haze.

A bit of news from the ongoing reconstruction talks, word is that there will be a four way round robin home and away group to settle SPL status for tenth and eleventh in the SPL, and second and third in the first.

Look, it can’t be that bad if it means St. Mirren sweat.

All of this reconstruction is getting a bit two complicated. After much thought, it should be two leagues of ten, and then regional football. Or, just one of twenty. Or two of sixteen, then regional. Or three of sixteen.

Or just leave it as it is, but spread the money around, because thats the real issue here.

Bit of Breaking news from Ibrox, the new club have decided that the two lads who invaded the pitch at Firhill will be given five year match bans when they are caught and identified. So far, 23,000 people have turned themselves in.

Some brilliant replies to the picture quiz yesterday, which made me want to do another.

Whats the policeman hearing on his radio? What could be going on here? 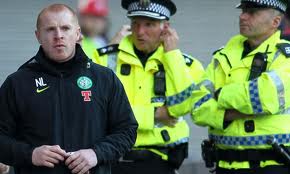 Great effort, that one had me laugh the most

Yes, he’s heading for the exit now, take the shot!

That isn’t a radio in his ear, he is just trying to remove a huge piece of wax that stops him from hearing sevco party tunes.

OR he could be saying “Right we have the uppity target in our sights. Do you think 2 of us will be enough for another kettling operation?”

Is he saying “Hey check me out, I look a bit like the dad from ‘Family Ties’!”

A ginger headed lad you say, what seat number is he in?

In spite of your excellent humour that read left me quite depressed. It is only when you dissect the stories that you realise just how much negativity is in the Scottish game right now, from childish name calling to youth disturbance – a psychological problem rather than a police one, it would seem. As the saying goes, if you did not see the funny side then you would see the truth – yes, I did make the second part up. I am off to do the caption. They DO cheer me up.

What if he sees me?

Can we do him for being an Irish Catholic? What bill?

I could kick his arse then run.

If Ally says something to him, we could have him.

What? Your cracking up, Mr. Lunny.

It’s like that movie “Minority Report”: the polis are monitoring Lennon so they can bust him for thinking bad thoughts about Euan Norris …

HING OAN A MINIT IT LOOKS LIKE ANDY COLE, OR OSAMA BIN DRINKIN’,…. FAE THE BACK

You’ve got it all wrong. Plod’s just got his finger stuck in his ear. Makes a change from their thumb stuck up their a…

Yes Inspector we’ll make that arrest, I definitely saw him chewing gum in an offensive manner. Our microphone also picked up noises consistant with breathing.

ok, I’ll leave it. He’s not wearing that track suit top with the tricolour.

I have just witnessed Lennon walking in an offensive manner, do you think we could jail him for that

‘Yes, I know I retired from the force 10 years ago. But you let me keep the uniform and I like wearing it. Haud oan a minute, I spy a ginger fenian…I think. Oh. where’s my specs? Take the uniform off immediately? Is that what ye said? Sorry, not receiving, my hearing aid battery’s gone deid!’

Re the issue about cup final shirts, I attended two in the 70s(League and Scottish) where Hibs and Celts both wore their home shirts with no problem, And we scored six in both. In another final (Dryburgh?) Hibs won 5-3, both teams wearing home kits. Storm in a (tea)cupIMO.