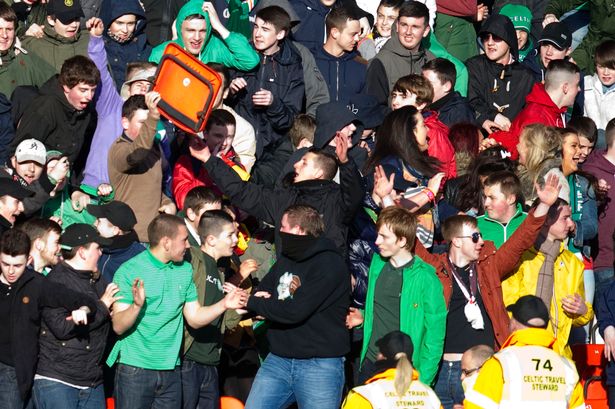 The picture above is a scene from last nights carnage at Firhill as Sevco u-17s won their first Glasgow Cup with a 3-2 win over Celtic. First, not 48th  as reported by SSN.

As you can see from the picture, a supporter is passing a broken seat down to the front, so it doesn’t hurt anyone.

Objective reporting at its best.

“Trouble flared even before the game as fans of both hurled abuse at each other” At a football match? Really? Almost never happens

“Tensions then escalated inside the stadium as supporters threw flares and smoke bombs.”

“Cops and stewards looked on as supporters sang secterian songs and spat abuse.” Yes, you can see the hatred clearly on those faces above.

“There were young boys set on by grown men in masks ”

Then the voice of sanity-predictably from a Rangers supporter;

“For a youth game to end up like this is embarrassing and shameful.”

The BBC described it as “unrest”, The Daily Mail described it as “hostile “-no “Hurrah for the Blueshirts,” but you felt that was what he meant, though, and the Larkhall Flute called it “A  rampage of drunken bead rattlers kidnapping kids and beating up old women on their way to pour abuse on the victims of the Ibrox Disaster.”

Hardly anyone mentioned the two Sevco fans who invaded the pitch, no-one mentioned the Union Bears arriving mob handed, and flares thrown at Celtic players was completely missed. Like the flare did, actually.

Anyone still want the “return” of the senior fixture?

For Celtic fans, it was a chance to see the youth team in action, and perhaps give them a bit of support in the face of a predictably large Sevco support, pandering back to the times when they had big games against big clubs.

Sifting through social media and various forums this morning, it looks like there was a wee bit of bother, and it was followed by a dreadful game, where the atmosphere of hate clearly got to the youngsters. Oh, and our Under 17 side has adopted company policy of shipping three poor goals to the opposition. At least its consistent.

Whats more sinister, and certainly more worrying for the game in Scotland, is this scene from the game, overlooked by all the MSM; 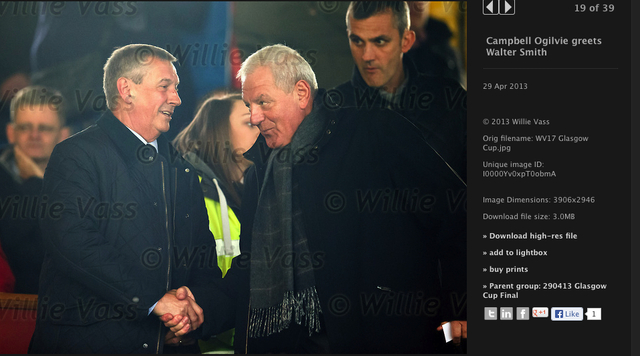 That handshake  confirms just how close these two are, and adds bite to the line at the end of the Record report which said that Rangers and the SFA were unavailable for comment. Well, here they are at the game. Did they see anything?

Where have we seen that handshake before? 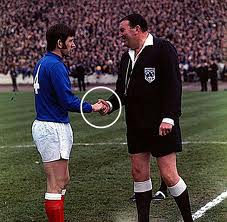 Draw your own conclusions.

We are all still in the dark over Neil Lennons “chat ” with referee after the Motherwell game, but reading between the lines, I’m starting to think that that actually is all it was, unless its against the rules to use a phone when you are on a touchline ban.

The Belfast Telegraph hints at an argument between the two in the tunnel after the game, with Lennon questioning the penalty decision . But then the paper did claim Lennon is on “tender hooks” (sic) then I’ll treat it with a pinch of silt. (also sic, sic of  shitey newspapers)

The Daily Express reckon he’s facing a cup final ban, which with their standard of reporting is as good as a verification of my theory, and then when they go on to say that Southampton will sign Wanyama, Hooper and Forster you realise that this paper couldn’t even be trusted to get the date right.

Kenny Shiels seems to be enjoying his tete-a-tete with Neil Lennon;

“Neil takes life too serious and he has to lighten up. He is at a really good club. They need to be represented by dignity and class” he said, in a Traynoresque application for any jobs going down Ibrox way.

Its not worth recording the rest of his statement, because its of an equal standard, and shows, well, the dignity and class of the man.

Celtic will face Second Division German side Union Berlin in a July 12 friendly to celebrate the opening of the new stand at Die Alte Forsterei stadium, named after the goalie who will give them a three goal start in the game.

Built with the help of fans, its a big occasion for the Germans. Chief  Dirk  Zingler (surely a former star of the European Adult Movie industry) said;

“This will be an unforgatteble event and a big thank you to all of those who have supported us over the years.”

“Such an occasion has to be celebrated with a worthy opponent, I am more than delighted to have attracted an absolute top club. The atmosphere in the stadium will be incredible.”

Liamatronebhoy saw the clue in the most cryptic of odd one outs to date-Lennon is the only one who worked for a PLC. He’s far too clever for this site.

Now, a picture quiz for a change. What are these two talking about? 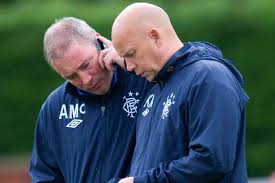 Sally: so kenny do you think the time is right to actually buy some shares?

Regaine is HOW much online?

No Kenny, it’s confirmed. Celtic won’t take you back!

Walter, is that 55 Titles now the weans have won something?

The conclusion I draw from the handshake between Smith and Ogilvie, is that it is merely a handshake. A normal one, unlike the other picture, which shows a Masonic grip. Probably ‘Pass grip of a fellow craft’.

I think it only looks like a ‘funny handshake’ if you expect it to. Find a friend, shake their hand, and look at the positioning of your respective fingers. It will look just like Smith’s and Ogilvie’s.

In most Masonic grips, the palms don’t fully meet and the one’s where the palms do meet are quite obviously not normal, looking like something more akin to a Vulcan greeting.

Is that greggs can i put in an order for collection please.

“Is that how liquidation is described in the dictionary? Nae chance, that cannae be right. Ah’ll call the average Scottish sports meeja hack, he’ll surely put us right.”

After last night’s shenanigans, does anyone seriously miss having ‘them’ or ‘zombie them’ about the place? We may be missing a bit of serious sustained domestic competition in the league but who (apart from the young Buckfast Provo brigade) wants to see zombies back at Paradise wrecking the place and soiling the atmosphere with the party tunes of hate and child abuse? I wouldn’t even have bothered my arse going to the youth game. I wonder how many would have turned up if we had been due to play Falkirk or someone else?

Kenny Sheils? Who he?

Whoever wrote this is a colossal, blinkered fuckwit. Both sets of fans were at it. Who’s going to pay for the damage to Firhill then?

Both sets of fans were “at it”. The article deals with the one sided attitude of the press, as for who pays for the damage, thats down to the clubs.

If it is so bad, then Partick will no doubt refuse to allow their ground for future fixtures and relinquish any extra income they will have received., replied the blinkered colossal fuckwit to the winner of the round Britain thought provoking comment competition.

I was at Firhill 2 weeks ago for thistle v morton in the same stand as the crowd were last night. You get a ticket to the stand, you don’t get a ticket for a seat. I arrived late and joined a throng of people trying to find a seat – I eventually founs a seat that was broken but mamaged to sit on it by balancing the broken seat on it’s broken hinges. There were also lots of seats taped off as they were dangerous – don’t know what happened last night as I wasn’t there, but from what I saw 2 weeks ago, that stand is in a state of disrepair.
Could this be a re-run of the Dundee “riot”?

Helo, is at ie doctors ?
Yes how can we help..
I cani see ma feet cause ma big fat bellys inia way, is that natural.?
Only if ya a fat pie eating manky hun.

“I’ll try and get Durranty again, forgot to tell him to get sauce with the pies”.

thIS HANDSHAKE, WHEN REGULARLY GIVEN AND RECEIVED,SERVES TO DISTINGUISH A BROTHER BY NIGHT AS WELL AS BY DAY “ENTERED APPRENTICE” AND PRONOUNCED THUS PHONETICALLY A. B. O. Z, BO AZ BOAZ, FOR THOSE OF US WHO WERE TAUGHT 2. B. COSHUS

“Have you got the Wonga app on your phone? We’re fucked”

Sally: Hello, is that the Polis? I’d like to report dodgy financail goings on at my fitba team. My pal Kenny has drawn a picture of the culprit so ye can find him..

Kenny: Dis that look like a wheelchair to you Ally?

Greggs..aye six pies, four bridies and four sausage rolls. Do you want anything Dowally? By the way how are ma shares? What do you mean Charles Green cashed them in? What.. he transferred them to City Bakeries 5088? Does wee Craigy Whyte no have a stak in them? Surely there has been a misteak? Aye ok… 2 steak pies as well then! Add to my account,thanks!

Difficult to know whether to laugh or cry at the diary today. Since I am a glass half full man, I think I’ll laugh in case I wet myself if it overflows. I had a night of flashbacks to THE days, you know the ones where you walked backwards in and out of the park because you weren’t sure which way the bottle would come. And I always said they would regret all seated stadiums. The stories seem to be full of piss and the behaviour full of pathetic. I guess that explains the piss pathetic reporting of events.

It is nice to know that Kenny does not take life as seriously as Lenny. But then Kenny has never had as serious a life experience a Lenny and that is before bombs and bullets. It must be a hoot in Kilmarnock, especially when you don’t need to take it seriously – could anyone actually go through Kilmarnock without laughing?

And so to the six months qualification period for the CL. The way we are going, we will be playing qualifiers before the previous season has reached the last sixteen. What happened to the simple life when you won your league, YOU qualified and played those that did the same in their country or a country that took you in at least. Oh, I forgot, big bucks in pockets. Silly me.

There once was an ugly pair of ducklings…….

Are you sure these are all the names I asked for, Campbell? I don’t see Lawwell or the pope on here.

Ally: Check the coupon again. I think I save five pound if I buy two extra large pizzas.

It’s in the rules, page one HUN dred ,
all huns get a penalty head start in every game

Aye let’s see..who do we want sent off in next game?

Sally “If we add the Glesga cup tae that League thing we won, how much will the pawn shop give us then.

hello wally , could you record that greggs thing at 9

on sky. I might be a wee bit late aye extra training we found a