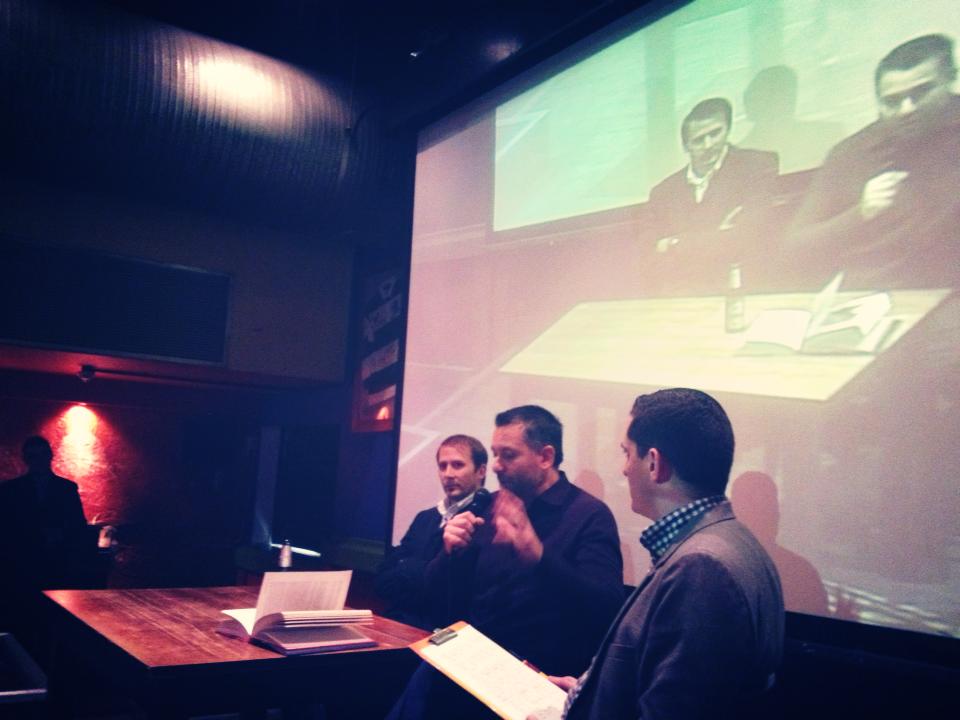 Gulliem Balague, the respected Spanish sports journalist (a word you’d struggle to use with any of his Scots equivalents), rolled into Glasgow last night to promote his new book Pep Guardiola: Another Way of Winning.

The venue was Walkabout on Renfield Street and a 600 strong crowd packed into the bar area to hear Balague talk about Barcelona mainly, but of course Celtic did come up in conversation. His special guest was the once brilliant Spanish international Gaizka Mendieta.

Tickets were £6 each and incredible value when you consider that the talk lasted two hours (plus a book signing). Of course, the ideal would be, for Balague at least, all 600 attendees buying the book as well.

So, what did he say that was worth hearing?

He talked about how Guardiola inherited a squad in chaos. Ronaldhino was partying and pumping all the time. Eto’o was a huffy tool and Deco had to go. Xavi was on the verge of a move to Manchester United and Messi was being led astray by his buck-toothed Brazilian team mate.

Guardiola’s first move was to instil steel and discipline. To put mental strength above physical dominance. The section from St Andrews was pretty good.

These are things which are relatively well known, but what Balague had that many others (except Graham Hunter perhaps) didn’t was access to players and more importantly, Guardiola himself.

The night was filled with stories and vignettes and Balague, as you would expect, is a natural speaker and has charisma in spades. There was mirth, serious stories and a fascinating insight into the Mourinho and Guardiola dynamic.

He’d visited Neil Lennon earlier in the day and talked a bit about how Xavi and others are in awe of the European nights at Celtic Park. But, the most interesting thing he mentioned was the view Barcelona’s top brass has on the future of football in Europe.

The inequality of TV revenue sharing in Spain is well known and has created the much criticised duopoly we see today. However, Balague insisted that the reason Barca has no intentions of redressing this balance is because they believe – and are pushing for – a pan-European league structure featuring 64 of the biggest teams in Europe competing not in a Champions League, but a proper league format, will come about. There would be relegation, promotion and all the wealth that would come with this.

And he believed Celtic would be part of this. Mendieta did also say that Rangers may be there in a few years time as well.

Now, this might not be news to many but to hear Balague talk about it so matter-of-factly was interesting as clearly he will have links into the Catalan giants and will no doubt have been given the go ahead to talk about this.

In all, this was a brilliant night; insightful and enjoyable. Mendieta added some class to proceedings but Balague’s engagement with the audience, his personality and moreover his willingness to share anecdotes made for a brilliant night. Two hours wasn’t long enough.

Could you imagine say any Scottish journo doing the same in a pub on Las Ramblas?

That sounds like a fascinating night, wish I could have been there. I’m about to take a long flight, sound like a good plane book!

I’ll commence reading it tonight, but from what I have heard from friends it is a brilliant read if you are in any way interested in Barca’s recent history. Have a good flight!

Wish I’d been there, must get the book.

Could you imagine say any Scottish journo doing the same in a pub on Las Ramblas?