There’s not a single one of us who wouldn’t swap places with “rangers ” right now and be heading into Seville for a Europa League final.

However, there is the second prize, and that’s being able to watch them make complete arses of themselves, as a football team, as a support and as a club. (Or company. )

And until we get our own act in place to mount a serious challenge at that level, it’s not a bad second prize.

As far as the actual game goes, I’m looking at it the same way as I look at England in major tournaments.

Let them get as far as they can and then watch them cascade from a great height, cushioned only by their own tears.

Because when it comes down to it, neither England or “rangers ” are good enough to win anything at that level.

Both benefited recently from the luck of the draw, and whilst you still have to win these games, neither did it with enough panache to suggest that when they come up against a decent side, they will be able to handle it.

So we can amuse ourselves , safe in the knowledge that a win is unlikely.

We can also amuse ourselves safe in the knowledge that even if they do win, their supporters will ensure that the club (or company ) will be banned from participating in Europe next season.

They just can’t help themselves.

Fully aware of this, former Rangers former players and managers have released vidoe messages imploring the fans to behave.

Never before has such a campaigin been launched, and it does raise the question about UEFA maybe warning them that they will be banned.

The media have, predictably, downplayed the significance of this move by the club (or company ) when it fact it is highlighting a clear and present danger to the city of Seville, thousands of European travellers and anyone else who happens to be unfotunate enough to be in the vicinity of a group of football fans enjoying a major final of a European tournament.

It’s got disaster written all over it, and whilst the Scottish media are portraying their behaviour as a form of enthusiastic banter, the Spanish civil Guard will be looking at it as a potential riot.

Unfortunately, they’re not hiring at the moment, as my own letter of application was returned saying that they are looking for someone with ambitions beyond hitting people with a big stick.

Although that does mean they’re not exactly short of numbers, and whilst there are many Celtic supporters with fond memories of drinking and singing with the Civil Guard, the Spanish law enforcement agency are unlikely to feel as well disposed to singing songs about being up to their knees in blood, or indeed, the charming little “We Hate Catholics ” ditty.

We shouldn’t laugh, but we;re going to. 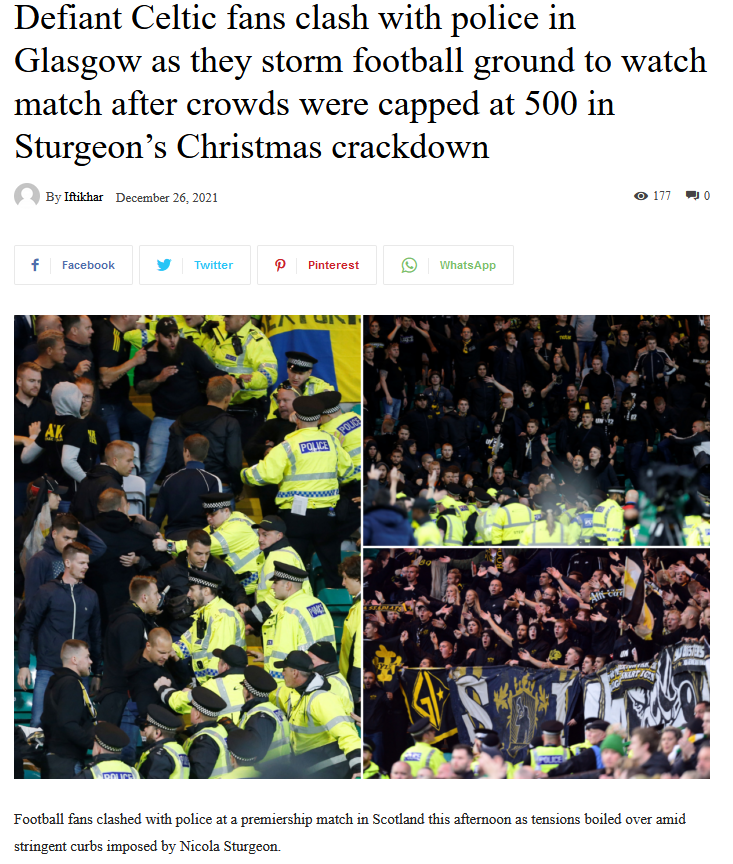 There were a number of complaints about the accuracy of this article, largely becuase it was bollocks, and after being taken to task by the Press complaints people, the Mail said;

Their statement should have said

“We were talking shite again but fuck it, it’s not like the Celtic board give a shit about what anyone says about their club or their fans ”

Which at least would have been accurate.

For all the good they are doing on the pitch at the moment, and the head of steam being built up with the Angera, here we have a reminder that we still have the same people running our club, and they have never done anything, on or off the park, that gives any of us any confidence that they have the club;s best interests at heart.

Indeed, by allowing the media to write such reports as the one above, they are in fact allowing open season on our club, it;s support and staff.

So what happens when one of them oversteps the mark with the manager, who until now has more than held his own against them ?

What when they start to send their grubby little hacks to check out his kids school behaviour, or his wife’s shopping list.

As he takes the club to a higher level on the pitch, the media will look to more, er, unconventional ways of removing him from the picture.

Once they spot a weakness, they will go for it.

That’s why it;s disappointing that fans had to hold the Mail to account, and the silence, yet again, from the club is deafening.

The Celtic Trust could take up the battle, but they are having a little bit of a battle themselves.

Their AGM is today, and the panel, or board, or whatever they call their executive, is facing a vote of no confidence….

This meeting agrees to a vote of no confidence in the current Trustees and Officers of the Celtic Trust.

The failure of the PLC board to deliver any meaningful European progression despite a decade of domestic dominance has been mirrored by the Trustees and Officers of the Celtic Trust.

Despite a traumatic league loss in season 2020-2021, the Trust leadership has overseen a reduction in Trust membership and no significant percentage increase in share ownership, least of all to 5%.

And in spite the formation of specialist sub-committees in early 2021, the Trust activities have seen no sustained campaigning against the PLC board or to attract either new members or to trace existing shareholders and increase its visibility as a shareholding organisation that fans can rally around.

Trust membership delivers around £60,000 per year in subscriptions. This meeting agrees that Trust activities do not represent value for money.

This meeting calls on incoming Trustees and Officers to produce a meaningful strategy document within three months of this AGM. This should include an activity plan to show with 6, 9 and 12-month objectives to show how the Trustees plan to increase both membership and percentage shareholding within the PLC club.

A kick up their comfort zone ? 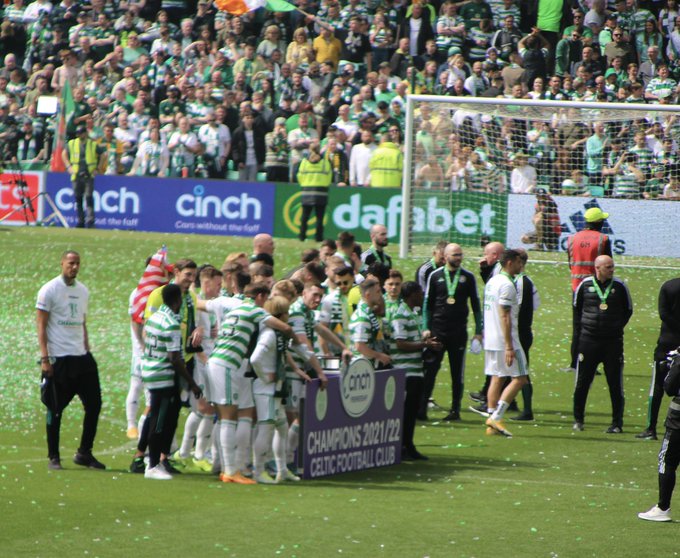 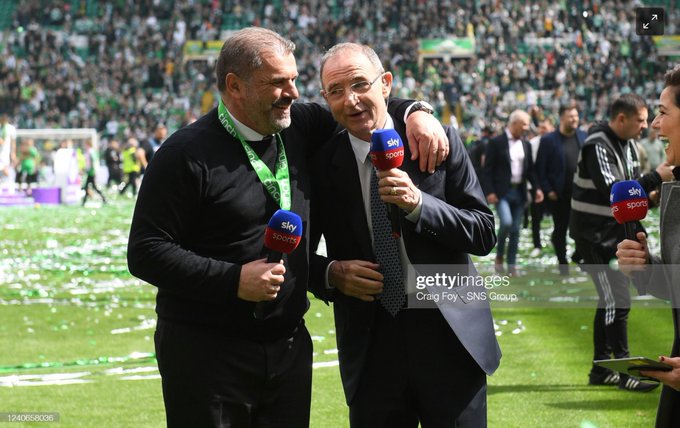 Too much focus on ” rangers “. Should be enjoying our league and Cup double.

Caption: Saint Martin: I had a quick with the Big Man and he’s said the fact you’ve stolen the Papa Francesco, Ale chant will not be an obstacle to canonisation, but it might be handy if you drew AS Roma or Lazio in the Champions League.

You might have won a treble mate but you had a world class player scoring goals.

Caption:
“Have you heard the one about the Huns behaving themselves in Seville?”

All the Hun fans fell for wee Gio van Donkey
Size of a monkey but knows the ‘Raynjurz way’
He knows every time he meets a new Hun eejit
He has to teach it how normal folk behave
But even Gio must have felt the strain
When watching all those Huns fly off to Spain.

All the Huns are looking pink and peely-wally
And full of swallie they smuggled in somehow
Let’s hope every Spanish polis will be queuing
Tae gie the doing the Scots wans don’t allow
Remind them that they’re no’ in George’s Square
And cannae shite and vomit on the flair.

Oh this week they’re off to sunny Spain
And God help Sevilla
Zombies looking for a brain
God help Sevilla
If the women look like they are whores
And the men like drug dealers
And their knuckles scrape along the floor
They’re Hun fans – say no more.

With the League and Champions League secured Eilidh pisses herself as MON tells Ange the Dave King fold like a pack of cards story.

1
The Cha
Reply to  Cesar

Dave King knew what he was talking about. 😉

Why do you think they pick this colour for the mics, GRUThem Ange mate!

The Scottish Huns media have flung enough poo at the support over the last few days, even trawling the pigeons to ask if they have been abused. But they now have to sweat as the marauders call on Seville then return to Glasgow to have a sit on a bench in George’s Square.

Caption: Legend Martin – Come out ye black and tans, come out and fight me like a man….
Legend Ange – Double 0 feckin bollocks.
Eilidh – Fight you like a man?, is that a dig? Right I’m outta here.

Sorry Ralph, always be a pessimist and you’ll never be disappointed. The huns are going to win and we all know it.

In Europe they seem to have the knack of winning, it’s us who are the shitebags bottlers when we are expected to win on the continent. See Cluj, Copenhagen, Bodo Glidt for all the evidence you need. They’ve already beat 2 better German teams who are higher up in the bundesliga.

No amount of praying and talking about how they will bottle it is going to help.

The reality is as Martin said in 2000 they are the benchmark and that can’t be denied for European football.

Ange needs to deliver for us next season in Europe, otherwise we will be doing the square root of fuck all and watching the huns win games in the champions league which I don’t doubt they will do.

Caption.
Ange : Can we reenact that time you stood shoulder to shoulder with Neil lennon at ibrox ?
Martin : Only if you let me be lenny big man.

You only won how many trophies in your first season?

you hum it and I’ll sing it Ange

For tonight what we happens we win again. Well if they win then we know that they have been beaten by true champions back home over 40 games – the better team won. If they lose, then we all celebrate that their luck run out. If they riot then there will be more than a few empty crisp packets and beer bottles to pick up. As I said whatever happens we win again

0
The Cha
Reply to  BroxburnBhoy

Ralph’s not knowing what day it is, is infectious, as the game’s tomorrow 🙂

Hopefully Eintracht win, Frankfurters in and will get some German beer tomorrow.

If they lose, I think, it means we get all of Scotland’s UCL money unless they qualify, which will be a toughie (Malmo) despite them (snigger) being one of Europe’s top teams.

Obviously we need to spend the money wisely and they need to embrace austerity.

If they do win then it staves off the wolf for the door for a bit but the league championship is the best indicator for future performance rather than a good (but lucky) Euro cup run that tends to be a 1 in a decade or even less thing.

Caption “Listen Ange, Lawwell may have gone but don’t trust any of them, let them show you the colour of their money and not promises on the never never”

Caption
Here Ange, did you ever hear the one about Brendan and Danny McGrain’

@baztomorrowband If you leave me now - Chicago 1976

@74frankfurt Loved that pub.. a full breakfast on a saturday night before the dancing!