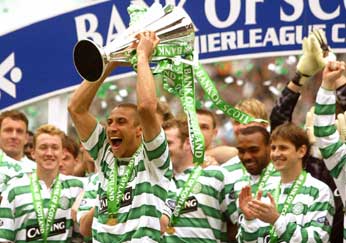 A major misunderstanding and an inability to understand the concepts of calenders meant that the Ross County game was nearly at half time before one of us started watching it. Turns out there was no real need to start watching it until the game was 92 minutes and 42 seconds old. That was when the County keeper fumbled a long range effort -again-but this time Kris Commons was on hand to equalise the Richard Brittain free kick and rescue a point for Celtic.

Perhaps minds were on the upcoming Helsingborg game, perhaps the formation was wrong, or perhaps the highland side just wanted it more. Personally, the feeling is that it was a mixture of all three, though there was definitely a sense that County were up for it-including a spot of gamesmanship from Derek Adams, the manager, who tried to keep the ball towards the end of the game. Then he had a moan about the injury time, which shows he is getting to grips with top level management. Charlie Mulgrew put the late rescue down to “self belief” in the team, which was refreshingly honest, and probably sums it up best. Just wish they started to believe a wee bit earlier, though.

Notably, the Sportscene saturday show claimed the goal came in the 94th mnute, which it didnt.
The champions League qualifier tomorrow night, now on all ITV stations nationwide, looks increasingly difficult. Celtic have given injections to Scott Brown and James Forrest and they trained yesterday, but Gary Hooper is unlikely to play. His hamstring injury is worse than first thought, and its too late to sign Jordan Rhodes to start this one. Thats worse than first thought the same way James Forrest had an injury last season that we said was worse than first thought, if you understand us. Signing Jordan Rhodes is an absolute neccesity, trust us on this one.
That leaves Anthony Stokes and Georgios Samaras, the latter back to his more usual Greek Tragedy efforts on Saturday, and the former yet to contribute this season. Lennon will probably pack the midfield and have Samaras in a roving ( actually, thats what he usually does anyway) role supported by Kris Commons, who at least does seem to be in some sort of decent form.
Still, theres always Mo Bangura. Actually, there will always be Mo Bangura, as no-one else wants him.
Ki Seung Yeung is wanted though. This time by Swansea, according to reports, for £5m, which is less than anyone else is allegedly ready to pay.
Age Hareide, the Helsingborg coach, reckons a clean sheet is the priority for his side tomorrow, which may give a clue as to how he will play the game, so an early goal will throw his plans out the window. We need to see Celtic go for it from the start, and unsettle them from the off.
According to Ewen Murray in the Scotsman,” the lack of domestic competition-namely Rangers absence-may already be having an impact at Celtic Park”, which is his way of explaining “a lack of bite” in the team.
Celtic currently sit fifth in the SPL table, two points behind Dundee Utd , who have played the same amount of games. Only Ross County and Dundee have scored less than us.
We just haven’t kicked in yet, thats all. And we do need a couple of signings to freshen it up a bit.
Its been a historic and wonderful weekend over at Ibrox. An official crowd of 49,118 saw Rangers beat East Stirling 5-1 -not quite causing the scoreboard to blow up, as gordon Dalziel predicted pre match-but cementing Port Vale f;lop andy Little as the new hun hero after his scintillating hat trick.
Nearly fifty thousand in the ground, and over two million jamming ticket hotlines means that surely the reborn juggernaut must be allowed back into the SPL now, and they should be given automatic entry into the group stages of the champions league.
Ally McCoist, who will defend his last outburst in front of the beaks, says “It was fantastic. Its a statement and its really encouraging”  And the good thing is, Ally, you’ll be playing at this level for a few years yet!
Charles Green, still playing the victim card, was delighted too. Stuffing piles of notes into a brown bag and leaping into a taxi, he thanked the support for their support and rushed off into the cool Glasgow summer evening….
McCoist, pushing Hugh Keevins to one side, and telling him to wipe his mouth, waxed lyrical about the amount of chances his side made against a team which usually finishes last in the Scottish senior set up.
Well done Ally, you’re on the way back.
Keevins, the journalist banned from Celtic Park for his upsetting article on the relationship between the family of Sean Fallon and Celtic, penned an article which means he will have to spend time in hospital having his tongue removed from the Rangers managers bottom. Still, if he doesn’t pander to them, he won’t have any stories to write.
Which is not neccessarily a bad thing.
“You’ll always be welcome here, my friend” said McCoist, closing the curtains and turning down the lights….(honest, thats what he says in the article. the rest I made up to capture the mood)
In this mornings news, director Tony Scott has killed himself by jumping from a bridge in Los Angeles. He directed films such as Top Gun and Beverly Hills cop II. Alcohol is believed to have a played a big part in his death, though the water in the river may well have played a bigger one.
Tagged Celtic Diary, Etims, Ralph Malph