Old Firm? Not in my name 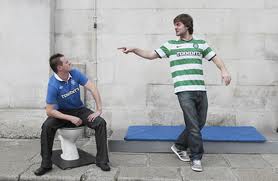 Our writer tells us how no matter what the Media and Society try and portray, hes not having any of this Old Firm tag.

Old: Having lived a long time; no longer young; made or built long ago

The term “Old Firm” never made sense to me. I have searched repeatedly for the origin of the term, without finding any conclusive information; I assume it (at least initially) referred to joint financial benefit of the rivalry. To me this seems a bit woolly, and requires more in-depth thought and analysis.

Old Firm days were always exciting. On such days the desire to win was washed away, and replaced with an insatiable need to claim the scalp of your oldest rivals in the most emphatic way possible, made all the better by the level of humiliation you could inflict on the other….. The ecstasy of winning….. The agony of defeat….. Everyone will, I’m sure, have memories of both outcomes. Why was it like this? How did it end up this way?

I’m fairly sure we all remember our first Old Firm game…… For me, it was the 19th of November 1997. I was 15…. I remember the feeling approaching the stadium, as I began to hear the toxic tones of the Rangers support singing the “Billy Boys”….. It was clear that this was no normal game…..

Hatred exists on both sides, of this, there is no doubt, but deeper analysis is required of what drives the hatred. What causes it, and what does each individual actually hate.

From a “Rangers” perspective, my views could be held as biased. However I believe that sufficient evidence exists to support my view. You be the judge.

As one of the ten founding members of the Scottish League, “Rangers” were one of the oldest clubs in the country. Founded by brothers, Moses and Peter McNeil, Peter Campbell, and William McBeath. The club was named after an English Rugby Club, and they played their earliest matches on Glasgow Green, moving to Ibrox much later. From what I have read the club had from its earliest days, close links and influences within the Presbyterian community.

Brother Walfrid, born Andrew Kerrin in 1840, was from Sligo in the west of Ireland. Being of “farming stock”, the Kerrin family were profoundly affected by the famine. He himself left and became a School Teacher after joining the Marist Order.

As history testifies to, vast numbers of native rural Irish were forced to flee their native land to the various Cities across the British Isles as well as North America. Industrial hubs such as Glasgow, Liverpool and Manchester became their destination, in search of work in whatever form to support their families.

For the most part, the Irish immigrants were not welcomed. The establishment within Scotland and the rest of the United Kingdom (Heavily influenced by the Protestant Churches of England and Scotland) were not of a mind to assist with the integration of the incoming Irish into society. In fact they worked against it.

The Horror, which Brother Walfrid witnessed during the famine in his homeland, was eerily echoed in the slums of Glasgow. So overcrowded as they were with the immigrant Irish population, rife with poverty, plagued by disease, starving, ignored and forgotten, driven away from any possibility of creating any sort of tolerant, integrated and diverse society. In keeping with the principals of the Marist Order, Brother Walfrid was both morally and duty bound to fight against this intolerable suffering. It should be noted however that the Church of Scotland were also active in Glasgow’s east end, in providing aid to those in need, though the motives of this aid were questioned by Brother Walfrid himself. Concerned that the aid was being used by the Church of Scotland as a means of diverting people away from the Catholic Church, he carried on regardless.

Through the horrors he witnessed, it became clear to Brother Walfrid that he needed to channel his work into a central point and objective. He had to find a way of uniting the impoverished, while feeding and clothing those ignored by their adopted countrymen. The anti- Irish-Catholic attitude becoming so toxic, becoming all the more real with the emergence of “Orangism” in Scotland. The success of Edinburgh Hibernian, was to become Walfrids template and inspiration.

In November of 1887, The Celtic Football & Athletic Company was constituted. This would be a club of inclusion. A source of employment, a place of belonging, where no-one would be left in the cold regardless of their background. In the words of our immortal inaugural manager, Willie Malley, “It is not his creed nor his nationality which counts -it’s the man himself.”

The century which followed, showed a continual escalation of hostility towards Celtic, in the mainstream media certainly, all the more buoyant thanks to it’s backing of the “establishment club”. This climate gave rise to the sense of triumphalism and entitlement, so deeply ingrained in the Presbyterian psyche, and so celebrated in their culture. Believing that they were, “the people”.

Celtic have their problems, this can’t be denied. Any football club with a following of our size, cannot help but have an “@rsehole element”. However, “Rangers” fans and the media would have you believe that the problem is equal on both sides. Of course “Rangers” fans are simply trying to divert attention from them in a rather vain hope that tarring someone else with the brush makes themselves look better. The MSM having this view is far more concerning. What is their motive? I’ll let you work that one out yourselves. Indeed, the term “Old Firm” is probably more applicable to the relationship between the media and “Rangers”.

My main problem with the term “Old Firm”, is that it creates a perceived association between the two clubs. It harbours the notion that you can’t mention one without mentioning the other. I have absolutely no desire for such an association, whether financially beneficial or not. Celtic Supporters have built up a deserved reputation as peaceful and respectful supporters across Europe and the World. One needs only look to 2003, and our wonderful Journey to Seville. 80,000 Celts, with no arrests. That season the Celtic Support was honoured to receive both UEFA and FIFA fair play awards following the Uefa Cup Final.

By contrast, in 2008 “Rangers” fans attended their own European final inManchester. The whole of Europe looked on in horror as the scum element had their day, just as they did in Barcelona in 1972. Running battles with Police, assaults, public property destroyed and buildings vandalised, culminating in 39 arrests.

The Triumphalist mainstay of the “Rangers” Support is what keeps their reputation in the gutter. This belief that they are “the people” and that they are “simply the best”, gives rise to a special kind of arrogance. This is the very attitude which has led “Rangers” to where they are today. The footballing and corporate graveyard.

Be under no illusion, Rangers are now dead. All that remains is a hastily formed tribute act. The refusal to accept this, both in the media and in the support is what I find most worrying. Their pigheadedness now replaced with a much more dangerous lust for revenge. They fully believe that everyone else did this to them and that it’s their duty to exact vengeance on us all, without any acceptance of responsibility themselves. The simple fact is, that they did it them-selves. The killing blow may have been delivered by one of many protagonists involved, however, the executioners sword was forged by their own hands. Sharpened by the misdemeanours of their forefathers. The blade poisoned by the religious bile, which poured from Ibrox Park.

I no longer recognise the term “Old Firm”. It ‘s just the echo of a lie. A lie that Celtic and Rangers were somehow connected. That their fates were somehow intertwined. I don’t buy that. We as a club were formed to do good, and quite frankly are better off without them.