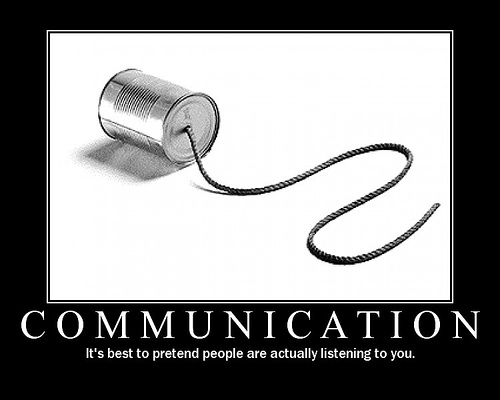 The BT technician stood at the bottom of the ladder, his white knuckles betraying the tightness of his grip. It had been ten minutes since he had put it up but his fear of heights was getting the better of him so he just stared up the pole. The ringing of a phone startled him, suddenly he realised that someone was trying to get in touch. Prying his hands from the ladder, he slowly made his way to the cab of his van.

The supervisor sat at his desk smoke coming from his ears, “does that bastard never answer the fucking phone” he shouted across the packed office. The operator sat rigid at the other side of the desk, trying not to do anything that might upset her supervisor. “When did you last get any communication from this technician?” “I have emailed him several times Sir but although he must read them he rarely communicates.” “What have I said about calling me Sir do I look like a fuckin gorilla?” The operator nearly choked as she tried to suppress her laughter you not only look like one you act like one you horrible man.

The technician looked at the phone that had stopped ringing, why can’t they just leave me alone he thought as he trudged back to the telegraph pole and his ladder.

His father had forced him into BT saying, “Communication is the next big thing son, you’ll be at the heart of technology in this industry” he hated communication, he never answered his emails and rarely his phone, occasionally however he would write a letter which he thought was much more civilised.

The householder watched from an upstairs window as the BT technician pissed about once more. “How the fuck do they expect me to know what is happening when they can’t sort out a simple thing like communications”