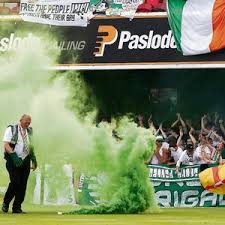 Celtic have been fined 5000 euros for the pyrotechnic display in a section of the crowd during the Cliftonville qualifier back in July at Celtic Park. Its the latest in a serious of contributions to the authorities that the club has been forced to make as supporters adhere to their own rule book , and not the one that everyone else has to. The one in the picture is from Griffin Park, Brentford, which wasn’t a UEFA game, so that didn’t come up.

Fines are a nuisance, but they have to be paid. More importantly, if fines are not seen as an adequate deterrent , then further sanctions are usually enforced. Its not the amount of the fine here that is important, its the step closer to a more severe penalty, such as ground closure, or being forced to play a European game away from Celtic Park. 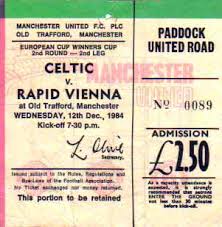 So how about growing up and going to the football to watch the game ?

The game we watched last night saw Scotland leap into fourth place in their World Cup qualifying group, and although its too late for it to have any bearing on who goes to Brazil, there are signs that there is a bit of a recovery underway. Scotland can be reasonably confident of continuing to improve under Gordon Strachan, and with the next big tournament, the Euros in 2016, being expanded to include nearly everyone, maybe we will have something to keep us interested during that summer.

Ireland won’t be going to South America either, and it looks like the end of the road for manager Giovanni Trappatoni. Especially with Martin O’ Neill hanging around the car park at FAI headquarters. Trap has had his press conference cancelled today, while the board consider his future.

He’s an old man, how much of a future does he have ?

Elsewhere, England drew in the Ukraine which keeps their chances of going to South America alive, which has cheered me no end. Yet again, their opponents paid attention to the price tags of the players, and not what they could actually do on the pitch. And Gary Hooper must be sitting in his house wondering what the feck he has done by moving south when he can’t get a game for that lot. Anyway, he says hello.

Meanwhile, all we can hope for is that all our players can get back to Lennoxtown and nobody is hurt. Theres a couple of big games coming up , and everyone needs to be ready and raring to go.

First up is Hearts , at Saturday lunchtime , and we here that the match programme will feature a ” Where is he now ” section as the Lithuanian police frantically try to find the clubs former owner Vladimir Romanov, who has disappeared owing an awful lot of money in his homeland.

His former club, however, have knuckled down under  the reality of administration and had a fairly decent start to the season. Whilst Hearts will never be a Celtic mans second team, one has to admire their attitude when faced with oblivion.

A team full of kids, and a support who, well, have supported them. They deserve praise for this, and hopefully the game will be a sell out.

Scottish football needs a strong Hearts, because I get a free breakfast at my pals ma’s house when we go to Edinburgh.

The other Edinburgh club, Hibernian, have posted a profit for the first time since James Kelly left the club to join Celtic back in the nineteenth century, and again it is fantastic to see the game in Scotland looks to have ridden the storm of losing one of its bigger clubs.

The BBC and the NUJ have decided to back reporter Jim Spence after all. Spence had referred to the old club Rangers on air, prompting four hundred complaints from supporters of the new club who don’t want to face up to reality.

And if they need any help with reality, this is a wee reminder of what happened on 28 December last year;

We, James Bernard Stephen and Malcolm Cohen, both of BDO LLP, 4 Atlantic Quay, 70 York Street, Glasgow, G2 8JX, hereby give notice pursuant to Rule 4.19 of the Insolvency(Scotland) Rules 1986 that we were appointed Joint Liquidators of RFC 2012 P.L.C. formerly The Rangers Football Club P.L.C., by resolution of the first meeting of creditorson 04 December 2012. A Liquidation Committee was formed.
James Bernard Stephen, Joint Liquidator
04 December 2012.

Thats not the holding company, thats the football club.

The assets were sold to someone else, and even now, months down the line, no-one knows who. Except it doesn’t really matter, because eventually the tax man will get them in the end, and sell them to Tesco.

Then, perhaps those supporters will realise what has happened. Instead of moaning at anyone who tries to point this out to them. Shooting the messenger was quite normal back in the dark ages,when a King would take his frustration at losing a battle on the guy who told him the news, but a little outdated now.

Oh hang on, thats where most of them still reside..

Had to chuckle at Derek Raes article in the Evening Times, where he bemoaned the fact that several top managers and coaches are out of work. granted, Martin O’ Neill still has a lot to offer the game, but when he mentions that Eric Black and Peter Grant are still without a club, perhaps he should have asked himself why..

Another ex-manager without a job now that banks are being held responsible for the money they lend out is Walter Smith, and in an amazing chat on Sky sports , he blamed schools for not teaching kids football. This knock on effect of having no-one come through to the top level is why Scotland were shite, presumably when he was manager.

Always blaming schools for something, that lot.

He wants under 12s to be encouraged to play the game, and that way we can restore some pride to the Scottish game. Like when his club side bored their way to a UEFA final, or when he was so proud of his position as Scotland manager that he walked away.

Smith, who has never nurtured or developed a youngster in his career , could be set for a new career as a tv pundit, which should have us screaming for the return of Craig Burley.

Craig is originally a gaelic word, and according to the Oxford Dictionary  “totally devoid of knowledge about football with a tendency to talk shite  ” and that  great book cites Brown, Levein and Burley as a few examples. The closest Anglo -Norman equivalent is a  ” Walter ”

And these idiots earn a living from the game.

New Celt Teemu Pukki-and I have a good feeling about this guy-was in action for Finalnd last night, and saw a perfectly good goal chalked off when the referee failed to see that it had crossed the line. Happily, when he starts the Scottish stage of his career, he’ll notice that the men in black over here can see through the back of their heads. 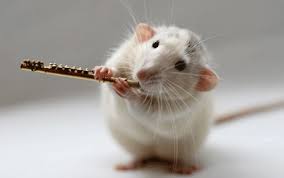 Sorry, when I googled masonic wee rat that came up, next to this;

When what I wanted was this;

One other thing to mention, which you’ll no doubt remember from the Tommy Boyd podcast, is the cycle run from celtic Park to Cardenden, home of the late great John Thomson and his final resting place. If you want to get involved, follow this link.

Yesterdays puzzle resurrected the memory of Brazilian superstar Rafael Scheidt, who was. Its worth remembering that every time Kenny Dalglish reminds us that John Barnes signed Stilian Petrov, he also signed Rafael Scheidt.

So, today, lets have a happier walk down memory lane…

Not sure who the bird is but I’m guessing Frank McGarvey.

I agree with walter Smith regarding youth football. He is correct.

Sure you didn’t mean Fanny Garner?

I gather our Frank had quite a collection!

Francis “Frankie” McAvennie
Vennie Kocsis as a clue is a bit obscure?

Agree about these immature fans.

I want a copy of your Oxford dictionary, priceless!

Your best diary this season, still smiling about it.

Tosh McKinley – haven’t seen him for a few years but I reckon that’s him at the bottom. …what’s the prize?

Who is Vennie Kocsis (christ I hope I have spelled that right) ? I demand to know !

Her words will rip you open, her vocals will lull you into peaceful relaxation, and her dynamic smile will remind you that out of the depths of suffering, the beauty of love can continue to grow.

Aye. I remember her. Played on the right wing for Riga Mortis (of Latvia) before signing for Tory Facistscum United.

… oh and she hated strikers

…and practitioner of the Morecambe and Wise dance

I never thought Levein should have got the Scotland job; too much, too soon. He did ok at Tannadice and could have developed into a decent manager given time. The SFA are just as much to blame as he is. Strachan should have been given the job at the time – then we might be looking forward to a play-off (at least) for a World Cup place.
I’ll be supporting England because I like Roy Hodgson and because I know they won’t win it. I’ll just press the ‘mute’ button when the pundits start talking their usual sheidt. I watch MOTD every week and know and like their players. But they won’t win because, just like us, they rely too much on imported players instead of breeding their own.
Walter Smith was correct – but like everyone else who moans won’t do anything about changing things.

Is it ‘the three tenners’ that you could now buy the Huns for?

Brilliant and…Craig is originally a gaelic word, and according to the Oxford Dictionary ”totally devoid of knowledge about football with a tendency to talk shite ” and that great book cites Brown, Levein and Burley as a few examples. The closest Anglo -Norman equivalent is a ” Walter ” pure class

Ha, ha, ha, ha, ha and that’s the wife’s reaction to me greetin’. She disnae know I’m crying wae laughin’. Not just the diary today but the comments are more than worthy of me keeping my trap shut.

Quiz: I haven’t a clue who she is but I widnae mind wakin’ up tae her – singing – in the morning! I would probably need to kick Frankie oot the bed first.

Completely agree with your message to the bangers Ralph – Stop letting off bangers ya bangers! Noe more rockets ya rockets! And no more flares ya, erm, fandans!

Did you lose them in the old Jungle? Have you still got the Roy Aitken perm?