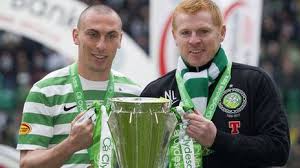 From the second minute, when Joe Ledley fired a shot into the corner of the net, Saturdays game was always going to be more of an exhibition match. Passing, movement, enthusiasm and goals all combined to make one of the more memorable games at Celtic Park this season, and the icing on the cake was provided when sleekit St. Johnstone defender headed into his own net for the fourth goal, after a performance which was little more than a ninety minute plea to Ally Mccoist to get him signed up at Sevco for next season.

If there was one thing missing from yesterday, its a substitute , who is maybe out on bail after beating up cage fighters, who can come on with a few minutes left purely to offer a little retribution on this sort of player.

Be worth it just to see the reaction of the likes of Wright when a seven foot monster stands next to him for the rest of the game, before launching him into the crowd for our viewing pleasure.

Scott Brown made a welcome return, and so did a sense of urgency within the team, and with Charlie Mulgrew restored to centre  half, there seemed to be a bit more cohesion and balance as well.

With speculation over  manager Neil Lennons future still at the forefront of sports reporting in Scotland, all eyes were on the manager when he made his post match speech.

“Its another memorable day in the history of the club and hopefully there’ll be many more uears like this to come. We’ve had a great season, the Champions League, the league, and I hope to see you at the Cup final. From my own personal point of view, ( At this point everyone in the ground caught their breath and leaned forward) thank you for all you’ve given me and long may it continue”

Depending on what paper you find on the train, those words mean he’s going, he’s staying, he’s returning to the playing side, or he’s off to a desert island to pursue a life of meditation and  pontification.

As expected, he gave nothing away, and said all that we could expect him to say.

Although he did give away his winners medal to a wee girl who simply asked him for it. Little touches like that can be taken in many ways, but to most observers that was a manager making sure one of the supporters had a day she will remember for the rest of her life.

Stoke City and Leicester are the latest sides to be supposedly interested in taking the gaffer south, which should have him  staying up all night wondering if a return to the glamour of midlands football is for him. Thing is, it seems some blinkered “experts” think he might even consider it.

Harry Redknapp, a man who struggles to accept his own detachment from reality , wants Gary Hooper to lead his charge back into the Premiership, after he failed to keep the debt ridden and poorly run outfit from the inevitable. £6m is the price quoted, as the Mirror thinks Hooper is “receptive” to a move south.

When the newspaper circulation figures are released for this month, it really shouldn’t be too difficult for editors and owners to work out why most people go into the shop in the morning and say

“Tell you what, I’ll just have the fags please.”

You know, these articles remind me of the ones in the nineties when Souness and Smith were encouraged to leave Rangers to better themselves in England. Having trouble finding them in the web archives , right enough. Can my memory be playing tricks?

For those of us who enjoy the misery of the supporters who have latched themselves onto the Charlie Green and Craig Whyte pyramid selling  operation that is Sevco, it should be another week of hilarity as more revelations of  shennannigans emerge into the public arena.

Alex Thompson of Channel Four was filming outside Ibrox Stadium last week, without chopper cover, and promises ground breaking news on Tuesday. With a CEO being given a vote of no confidence-then refusing to leave, with all sorts of accusations being levelled at the two main shysters in the whole pantomime, you’d have thought the reporters in Scotland would have looked into some of this themselves, but alas, there are no budding Woodwards, no budding Bernsteins, and no Kate Adies amongst the honourable fourth estate in the north.

There is James Traynor, though, wherever he went. There are the new breed of reporters, such as Matthew Lindsay, and Richard Wilson.

I had the honour of perusing Wilsons “Inside the Divide”, a book about Celtic and now defunct Rangers, and would just like to point out to anyone who might be considering purchasing this particular offering, that they perhaps should give it a miss.

It’ll make your eyes bleed. Honest, its that bad. Riddled with inaccuracies and blatant bias, it is quite possibly the worst book written about Scottish football ever.

Including Hugh Keevins awful effort when he decided to write Danny McGrains story “In sunshine and in Shadow”, when the esteemed Hugh managed , by writng in the first person, to make one of Scottish footballs legends look like, well, a low grade sports hack.

Ach, enough of those goons who make a living by running the game down up here. If they choose to suck the life of the game whilst making a living off it, then thats up to them. All things must pass, and when the current Sevco crisis is over, one would hope that a few of them are called into editors offices and asked just exactly what they were doing when the greatest sports scandal of all was taking place.

But rants about them are for another day.

Today is about this 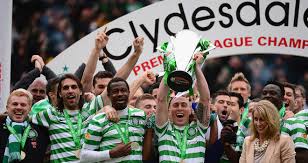 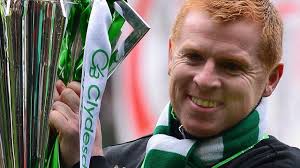 and this, which sums up  our club, the people who run it, and the people  who support it. 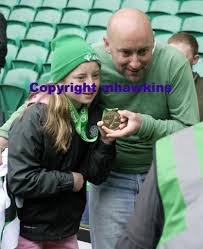 So, this week, there is a feeling that the world is continuing to spin merrily on its axis, and all is well. Celtic have finally received the trophy, and retain the status of champions.

Despite what you may read, it has been a refreshing and competitive season. Teams have raised their games against us, especially at their own grounds. Ten in a row is not in any way certain, but it is there to be taken. not because there is no strong Rangers, but because Celtic are a good side. A club with a fantastic, unbroken history. A wonderful present, and a future which promises to be just as good.

I would be interested to know what these two are talking about , though… 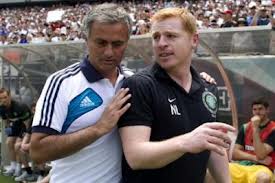 Surely Mourinho isn’t asking if its true Lennons going, and can he have Lawwells number?

On a lighter note, I did see something that shocked me the other day. A fifteen year old girl in a Rangers top drinking pint after pint of lager in a bar. Seriously, when you see this sort of thing, you worry about how society is changing-and for the worse. I mean, who was looking after her kids?

Hey Neil, I’ve been offered the job at poundland. Are they still getting away with the EBT’s?
Of course Jose, they are looking for the chosen one to lead them out of the wilderness.

Hey special one! U got any tips on how I can stop barca winning la liga?

Yes Jose as a wiz saying tae the wee fat pie man @ the asbestosdome, the ither day,LANG MAY YUR BUM REEK WI’ ITHER FOULKS PIES “SALLY DEAREST”, EH NEILLY WIT ABOOT WATTIE THE LOYAL CARDIGAN AND MANAGER EXTRAORDINAIRE , IS HE STILL AT THE BIGOTDOME,NO JOSE HE’S FUR RA’ OFF CANNIE HONNEL THE CRAP @ RA BOARDROOM, TEE HEE SAYS BOTH OF US G.I.R.F.U.Ys. YA M. H. Bs. yeez deserve everything that is coming @ yiz,HOPE IT PISHES FOR THE 12TH DAY OF JULY AND YEEZ AW’ GET FLUSHED DOON THE BIG DRAIN IN GLESGAE

JIST BANTER OF COORSE YI BUNNZ UNNERSTON DAINT YEEZ,TEE FECKING HEE, IT WILL BE 10 YEARS OR MER AFORE YEES IS BACK IN YUROPEAN FITBA, IF YI’ KIN’ GET SOMEBODY STEWPIT ENUFF TAE AUDIT YUR BOOKS, WHEREVER THE FECK THEY UR, REALLY ENJOYING THIS SEVCO FIASCO,LOOKS LIKE MER INSOLVENCY SENARIOSE,HEADIN’ FOR SLUDGE CENTRAL,POOR WEE ALLY OR SHOULD A SAY POOR WEE PATSY COS THATS AW’ HE IZ ONLY HE DIZNAE REALISE IT ,OR MAYBE HE DOES AND IZ JIST TOO STEWPID TAE WOK AWAY WHILE HIS SANITY IS SOMEWHAT INTACT, TEE HEE SALLY YOUR WELCOME TO THE NIGHTMARE “THAT IZ SEVCO SCOTLAND” FARE THEE WEEL SALLY FARE THEE WEEL A SAY G.B.N.L. THE ONLY DECENT MANAGER IN SCOTTISH FITBA’, CANNAE W8 TAE BONNIEBAGPIPELAND PLAYS ENGURLAND AND THE BHOYS WAE THE ROSES SLAUGHTER THE HAGGIS BASHERS, YI SEE MA TEAM PLAYS IN THE AVIVA ALTHOUGH A WIZ BORN IN SUNNY EASDALE LAND

I was just thinking that we have been missing Brown over the last few games to add a bit of fight in matches that others are just cruising in because the are “meaningless”.

Also, on a week where Celtic have just received the league troph, the BBC website has Motherwell as there top story and not a Mention of Celtic.

Says it all really.

Hi Jose ..naw his name isnae Francie but he is the manager of a scottish third division team!