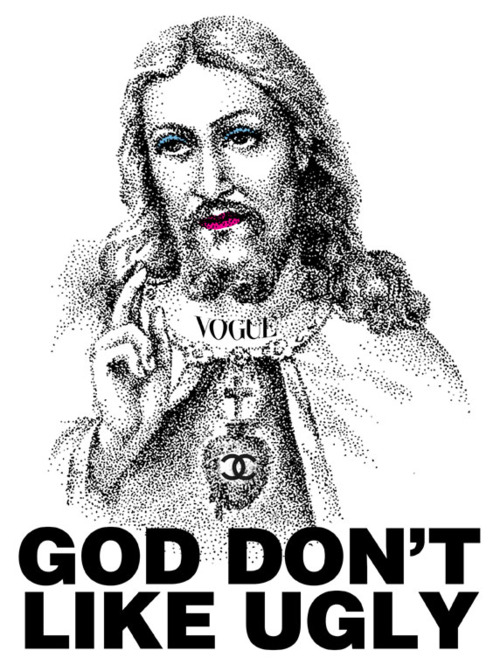 The Gods of Technology conspired against us and slapped our would be “Fly the Flag”  podcast into Title winning Oblivion( copyright Tim Cruise). 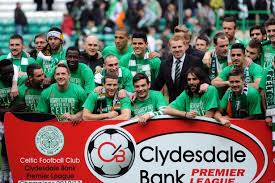 Ralph told how he was very happy at the joyful double of Celtic securing the title whilst he won a football card at  his local which helped pay for his celebrations. Hector enjoyed the Championship win as always but  felt the League win had come second to the wonder that was the Champions League Campaign. Desimond talked about the complacency factor and wondered if this might be a possible problem which ended up with Ralph and Hector have a “Winner Takes All” difference  of opinion on the chance of an actual challenge from clubs within the SPL. Ralph reckons its possible while Hector reckoned it must have been some football card win if Ralph is sill drunk almost a week later. The team also saluted the youngsters for winning their league again with Desi announcing the story that one young Celtic starlet has recently had a team suit made for him at Slaters…could this be the start of the big time for young Mister Bahrudi Anatij?

Player of the Year – Lennys Rant 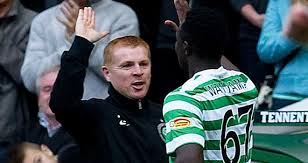 After discussing the League win, we moved onto discussing Players of the Year. Hector as our Tic-tac-Toe man praised Victor Wanyamas performances in the Champions League while Desi opted to salute Kris Commons and his return to form following a season last year that everyone wishes to forget. Desi then went into Grumpy Old Man routine complaining about Kris Commons, and footballers in general, mental tattoos but the Inspiration of Sammi saved him from a full rant. This was left to Ralph who once again volunteered to help Fraser Forster exit Celtic Park anytime soon which prompted Hector to wonder if Fraser had been visiting the Stoke area whilst Ralph has been away on business.

The team discussed Lennys rant, where he lambasted the fact that no Celtic players made the PFA shortlist ( Wanyama is on the Young Players list) and the general feeling was Lenny should try and avoid giving an eager Media tomorrows headlines even when its clear he is just defending his players. ‘Starve them and let them suffer’ seemed to be our suggestion. We moved onto players coming and going. Ralph welcomed Vics news that he expects to say, Desi wonders if that will happen while Hector summed it up when he said its probably inevitable some will go but on recent evidence we can have faith in the Scouting network and ‘The Project’ will continue to progress regardless of personnel changes. 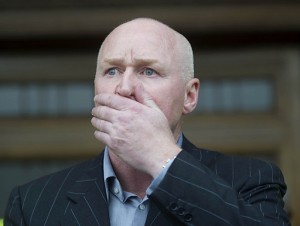 Monty Burns joined the team at this point, just as we were talking about Gangsters, what are the chances. The team discussed the departure of Charles Green and the continuing shambles at Ibrox. Monty suggested the end game is just beginning and the fun is really about to begin while Ralph worried there would be nothing for him to put in the Diary now that Charles Green has departed to his chateau in France. Desi asked about the validity of the Rangers license, should Peterhead or Queens Park appeal for promotion?   Ralph asked if the SFA will ever step in to protect their Member clubs, he even noted that  they should be  helping to protect decent Rangers fans from this appalling behaviour over on the South Side. Ralph wonders if the SFA are just to scared about what they may actually find should they ever dare do their jobs and investigate.  Hector and Desi discussed the question of how do Celtic fans see Rangers now, do we care at all, does anyone really miss them and now do we all just think of “Another Criminal Storyline” when we hear of news coming up about Rangers rather than any football matters. We then went onto discuss John Bomber Browns recent revelations on BBC Scotland where he revealed he had told Ally McCoist, Walter Smith and Jim Traynor about Green but surprisingly they all seem to have did okay out of it despite his warnings.

Hector was finally found stuck for words when the team discussed Jim Traynors involvement and Desi asked him “So Hector, how corrupt is the Scottish media?” Monty questioned why anyone would have believed Bomber, and noted how easily journalist Tom English began picking holes in his story, yes John, proof would have helped. There was a shock outcome on this topic when Hector joked to Monty that Tom English, the Irishman from The Scotsman was more Irish than Monty as Tom was from the South of the Emerald Isle compared to Montys North. The verbal rammy thereafter was more intense than the fight between Mel Gibson and Gary Busey in Lethal Weapon 1 and this prompted the team to thereafter mention any Mel Gibson film wherever they could, ie Conspiracy Theory ( which could be a trait for later Etims podcasts!). 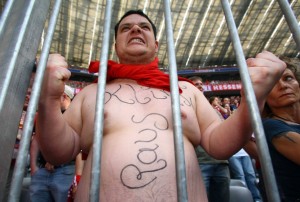 The team discussed the lure of European football and how signings for Celtic would consider the alluring prospect of games against Europes finest rather than games against Scotlands 3rd/2nd Divisions biggest money burning club, despite what the media try and say. This led on to a praising of Bayern and Borussia after their successes in the Champions Leaguie against Barca and Real. The Dortmund  play and signing policy  was saluted and the attitude shown to “fans & family” rather than customers was celebrated, hopefully we’re on that same road. Monty asked why the high quality German football doesnt get more coverage, considering the overhyped EPL, and Desi suggested it may be because Gareth Bale, the Greatest player ever ever ever ever ever, doesnt play in Germany.

The lads then discussed the news that Season Books are being reduced by £100 and Desi asked for their thoughts. Ralph, as resident ETims Champion of Match day Improvement was “Shocked” at the news of such a high discount and of course welcomed it “As a decent start”.  Wait till he hears Lawwell wants to bring bevvy back to Paradise! Ralph also asked the good question if this discount was actually part funded by the failure to Reconstruct Scottish football which initially hinted at Celtic giving up major funds to other clubs.  Hector saluted the excellent family pricing and how this could see many folk committing to a Season Book when they may have been apprehensive. Monty couldnt provide the requested information on how the Fat cats in hospitality are getting on regards discounts but he did suggest the Board should have went even further and paid for every fans trip to London to piss on Thatchers grave. An Etims memo was duly dispatched to Peter Lawwell.

This led onto the  Etims Twitterbag question, whereby we end the Podcast with the answers to a question put out to our followers on EtimsNet on Twitter.

The question was “What will you spend your £100 Season Book discount on?” …thanks to all below for answers – anyone spot a theme in first replies…

@TynesideNo1CSC : 5 Million Sevco shares, but what to do with remaining £60 ?

@ArmstrongVinnie : I will buy Sevco and settle Allys Greggs bill from last week with change!

@unofficialdanny :  Valuation fee for my new flat at ibrox Gardens

@bigbhoydoc : Put it by for next season when Celtic put up prices by £150

@Dass_Butt :  A Season Ticket at Dortmund

@Cfeetsrevenge  : A bag for my baws

@foghirl123 : Half celebrating another league win, other half on hangover cure!

@chris_hoy82 : A steak pie and kit-kat at Paradise…dunno about the 83p change

@RonaldMcC  : A burger and coke from the Stadium kiosk

@acon74 : All the dignity over Edmiston Drive. And something else with remaining £99.99

@verdebhoy : A deposit on a flat at former Murray Park

@tammcd : On paying for a more costly seat that CFC insist on moving me to

@gedbhoyfitzy : Nothing coz if you have a Parent\Child package – No discount!

@kevhug8118 : An iron for Chris Graham and deodorant for the hordes down Ibrox way when it all goes tits up

@wurzie82 : A few hours of a Paul Slane Weekender

@sjblair : if its no Hookers and drugs they are lying!

A runner for my green curtains.

Meant to add. It sounded great guys. I now have a sore stomach to go with my dried up tear ducts from the diary.

The only spanner in the wheel was your mention of the SFA. I have never known an acronym to describe an organisation so aptly. How long can you be totally inactive till you are pronounced dead? I know, I know, they have been brain dead for years. I am talking about when we can order the coffin?