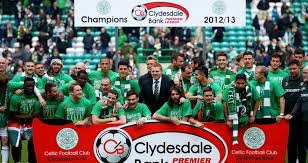 Initially, I thought it was really foggy this morning, but in fact its actually my eyes.

A fantastic day yesterday, a league title finally in the bag, and a cup final still to come.

Celtic stormed to a 4-1 win over Inverness, which prompted scenes of joy and exultation with the second of ten consecutive titles in the bag.

After a nervy first half when things didn’t quite seem to go to plan, James Forrest, who managed a credible 45 minutes before hurting himself, was replaced by Emilio Izzaguerre, and the team had more balance about it, and the goals kept coming.

Celtic immediately cut the prices for the St. Johnstone game, where the trophy will be presented, to just £20, £10 (concessions)  and £5 for kids under thirteen, causing howls of anguish amongst season book holders, and although the gesture is appreciated, there may be one or two people who hesitate when the renewal form comes through the door.

Whilst it would have been nice to get the trophy yesterday, it means another day out on the jelly and ice cream next month.

Spare a thought for Inverness though, only the runners- up this year get a place in Europe, and it doesn’t look like being them.

Anyhow, Neil Lennon had to wait fifteen minutes before he could come on to the pitch to join in the celebrations. The touchline ban meant that when he finally bounded out of the tunnel, he got a fair idea of the esteem he is held in by the support. And when he was handed the microphone, he resisted the urge to swear and left everyone in no doubt that he is, indeed , one of us;

He also thanked the board for their support, his missus and son for coming to the game, and you kind of got the feeling that he would be in the pub later thanking the bar stool for letting him sit on it.

Anyone who ever had any doubts about his commitment to Celtic only has to watch his speech post match.

Bombs and bullets didn’t shift him, and neither will money.

Gary Hooper, having had a microphone thrust in his face, replied “We’ll see” when he was asked if he’d be here next year by a desperate interviewer who clearly wasn’t enjoying the occasion.

Sometimes its hard to remember he is only 24, and may not have reached his peak yet. Celtic took a chance on him when he was centre forward at Scunthorpe, when no EPL side-bar a couple of the duff ones-was prepared to, and it might be an idea to remind him of that when agents fill his head with stories of big pay packets and rainy nights in Stoke or Sunderland.

Joe Ledley, who many think is already house hunting in Cardiff was refreshingly honest;

There will always be ins and outs in football at every single club. We have a fantastic team and I’ll be very surprised if everyone stays. Everyone has watched us in the Champions League and theres going to be a lot of interest in the majorityof the players. But if we can keep it together we have a fantastic future and Celtic will go forward and hopefully qualify for the Champions League again. Theres nothing new with my own situation at the moment but I’ll sit down near the beginning of next season and try to sort somthing out…..I love it here at Celtic and obviously want to stay.

I think most of the players want to stay but you just never know in football.”

His words also point-perhaps i’m being a little paranoid- to the remit given to journalists yesterday when speaking to players;

“Congatulate them on the win, then ask them when they are away.”

Keith Jackson has also just secured a second consecutive Reporter of the year crown, which is some going considering the opposition. If the race to the Scottish title can be dubbed a one horse race-(like the EPL) then the reporter of the year contest must be the only race on the list to have no runners whatsoever.

Jackson clearly won it because those who chose had lost everyone elses phone number.

All in all, its been quite an eventful few days, New Rangers lost to Peterhead, shortly after losing their chief executive, who was photographed shortly before going into hiding; 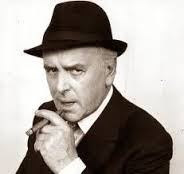 Oops, thats not him 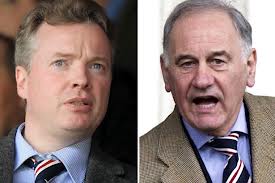 I think thats him, on the right, with a bloke he’s never met except or worked for, except for the last twelve months or so.

Anyway, the row over who actually owns Ibrox continues, and manager Ally McCoist has revealed exactly what the clubs status in the famous old stadium really is 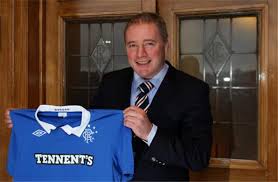 Anyway, on Friday we asked who should play who in a film about the Rangers train wreck, and here we see McCoist actually metamorphosing into the lass who is tipped to play his part 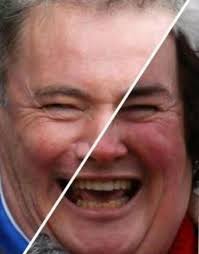 You may find that the words “tainted title ” are used today by supporters of that now defunct club, you may also hear them try to denigrate Celtics achievement, and all you have to do is remind them that Celtic just did something Rangers will never , ever do again.

Because they are dead.

We also asked about the photo of the dressing room at Hampden, which is where Fraser Forster was accused of smashing up a locker.

Today, instead of a quiz, I have a moral dilemma , which I need advice on.

Yesterday, enjoying a post match refreshment or two, a lady came over to us in the pub, and asked us to participate in choosing the name of a football team from a list, one of which would be revealed as being worth twenty five pounds when the sticker at the top was removed. Now, I never , ever gamble, so I declined, whereupon my  companion called me a miserable bastard, and paid a pound for me to choose a team. After all, it was in aid of the Lifeboat Association, who do a lot of work in Stoke on Trent, I chose Wimbledon, which turned out to be the winner.

Do I keep the money?

yes keep the dough,you could buy 20 Sevco’s. Don’t diss the RNLI-when you need them, you ll REALLY need them.no ones ever drowned waiting on the RAC

Aye keep it an keep it forever and ever and ever an never spend it ya miserable shite ! Ps great day yesterday stsdium and the celtd came alive when the sun camme oot ! Concidence ? I think not .

Buy Rangers (Mark II) and run them into the ground. Again.

Some crackers in today’s diary. And stand up along with Desi and all the others and take the applause – well mine at least – for a season of memorable diaries and articles that have contributed as much to the enjoyment of this great season as the games, the trophy (nearly said trophies then remembered) and all other spectacular things that happened. You guys play an extraordinary part in entertaining people like me who are restricted in our physical participation. Well done and a massive thank you.

Aye, Keith Jackson! It doth say a great deal about our journalistic and literary standards, m’ lord, fuckin’ empty vessels, well those that are not cracked! Mr. Lunny’s letter will no doubt be being typed as I post.

As for changes in the playing staff next year, I have no fears. We shall seek and we shall find and the “good shepherd” Lennon will tender his flock and keep them safe and our cup will once more overflow. I am really just boasting that I went to mass yesterday.

I only have two cribs. I do wish you could have left out the club in the third dimension on such a day. And, by the way, I have a soft spot for wee Susan, even if it does entail a possible pension addition, and putting her anywhere near that pie was definitely not called for. But today is a day of reconciliation, unless you are wearing the colour b…- naw, I’ll just leave it at reconciliation.

Far be it from me to end on a sour note, me the chirping dodo of ETims. I will celebrate the coming to an end of my season with my post from yesterday which I had to get off my chest and what better place for a pile of hair than the ETims comments.

Monday is far too far away and besides it is a “blue” day. So

CONGRATULATIONS AND BEST WISHES TO ALL AT CELTIC PARK AND IN THE CELTIC FAMILY FOR ANOTHER TITLE WIN. WE’RE ON THE ROAD AGAIN…..

with nothing to stop us for at least a couple of decades unless Aberdeen find a billionaire investor. There will be one on the loose, I hear, come May.

Imagine, just imagine, I forgot about your moral dalai lama!

“Yesterday, enjoying a post match refreshment or two, a lady came over to us in the pub, and asked us to participate in choosing the name of a football team from a list, one of which would be revealed as being worth twenty five pounds when the sticker at the top was removed.”

I never thought I would see the day you won THAT team in a raffle. Sounds like the shares had a rise if they were worth £25 yesterday. Any decent man would definitely put it in the fighting fund. You should be willing to assist a good (s)crapping club. And I bet it was an orange sticker you pulled too and it not even near 12/07!

PS To the real world. Thoughts and prayers with all victims of the recent tragedies in sport and elsewhere throughout the world.

Totally joining in your applause for the diary et al PB, but I’m also giving a wee nod to your good self for your contribution to my – and I’m sure a few others – entertainment as well throughout the season. I look forward to the many smiles you create on my wee geggy for many seasons to come.
Hail hail!

If only my old lady was as appreciative. Every morning she asks me for a big smile so I take one look and my wee geggy goes cold. I really do hope she does not know my password or I just might get a permanent smile on my geggy :).

Thank you, my friend, for your kind comment and, like you I look forward – I can only hope actually – to retaining a sense of humour under very trying circumstances – hey, you haven’t seen her!!!

I didn’t realize the Trent was such a hotbed of Maritime misery that it needs life boats. What happened to just throwing somebody a rubber ring and grabbing a dry towel for them. I smell a rat in this football card name buying charade, so no need to feel bad, it’s just that Catholic guilt that kicks in every now and then.