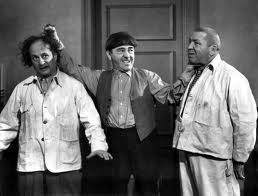 Celtic will win a second consecutive title if Motherwell fail to beat Dundee Utd tomorrow night. If Motherwell win, then a point is neede at home to Inverness on Sunday. Great planning again by the Fixtures committee, pictured above. Still doing their best to drain excitement from the game

It wouldn’t be so bad, but these fixtures were only decided on a week ago. How about both games on Sunday, simultaneously on tv? Crank up the excitement by making Celtic play Forster and Ambrose?

When reconstruction , or rebuilding , is finally sorted, could I suggest all games at 3pm on a Saturday, bar one for tv either before or after the main body of matches. Either that or none at all? If its not too much trouble?

Aleksander Tonev has said it would be an honour to join Celtic. The Bulgarian winger told the Daily Record;

“Its an honour to know Celtic are interested in me. They have a big history and their performance in Europe this year has shown they are ready to create new history. ”

Stopping short of saying which team he always picks on FIFA 2013, he continued;

“Last summer there were Italian teams interested and even though Serie A is one of the top leagues its important for me I consistently play Champions League football. Celtic is somewhere I could achieve that. I just concentrate on playing. Hopefully a move can be sorted this summer.”

“Reports suggest” he would cost £2m , but this is the Record remember.

23 year old Crewe captain Luke Murphy is also the centre of attention, especially as there is a shirt already up for grabs with that name on. The midfielder has been long on the radar of Neil Lennon, and if any rumour has legs , then this could be the one. Its been mentioned in local papers down here as well, along with the what-is-wrong-with-charlie-adam stories. Darren Randolph of Motherwell wants his team to finish second in the league, as his next one will be finishing first…

With Cardiff being promoted to the EPL, FIFA vice president Jim Boyce has quickly quashed any hope Celtic have of using that as a precedent, as he said they were already in English football when FIFA moved to ensure teams only play in their home country. Except Monaco, from Monaco, who play in France, Berwick, from England, who play in Scotland, and Sevco , from Mordor, who play in the Shitpit.

Fair play to Boyce though, he singled out Rangers and pretty much told them they would be going nowhere. Except the bankruptcy courts , presumably.

With Scottish football dying , and change needed, the SFA have offered to mediate between the SPL clubs after plans for reconstruction were blocked by Stewart Gilmour. (Yes, I know Ross County voted against it as well, but their gaffer doesn’t run around shouting that he isn’t working to a “Celtic rulebook”-and a drunk guy told us he did , in fact , say it, and I believe him. This drunk has told a lot of other people as well, and i believe them too.) Gilmour said he has had no “undue influence”, and laughably told the press that Charles Green was wearing a St. Mirren tie because he had forgotten his own. Despite many, many Celtic fans seeing him outside the ground wearing one…honest, do they expect us to believe a Rangers man would forget his tie?

So, thats the SFA, with Campbell Ogilvie , ex Rangers and Hearts chairman. Well, I suppose its quicker for him to destroy all the clubs at once rather than just one at a time, as he has been doing. Actually, we have been given a sneak preview of  Ogilvies plans for change…

In a new Superpremier League, there will be Rangers, Hearts, Cowdenbeath, St.Mirren, Dunfermline and some others, who will each pay 25% of their income to the first two clubs. And give them half their players.

The finer details will be worked out by an independent panel , consisting of Ogilvie, Gordon Smith, Walter Smith, Charles Green and Hugh Dallas. Donald Findlay, who yesterday slated whining SPL chairman for kicking out Rangers in the first place, will oversee the legalities, with Gavin Masterton looking after the money. James Traynor will be in charge of media  communications, and Keith Jackson will conjure up stories for kids.

What would we do without them?

I may be wrong, but someone is at it here. Wonder who, and what could possibly be their motives?

May 1, 7.30, for just five shiny pounds, £2 for kids, you can pop along to Hampden and cheer the Youth side to a possible fourth Cup win in a row. They face Dunfermline, who need the money.

Another team who needs the money is the Sevco/Rangers tribute team. Their share prices are falling, amidst rumours of investigation over some “shoddy paperwork”, where it appears they have put the wrong names in the wrong boxes, and then forgotten to change them. Shoddy paperwork is from an old Latin phrase, which loosely translated means ” lying through our teeth”

Aberdeen chairman Stewart Milne, still watching re-runs of the Godfather and wondering who sells horses heads, has declared that he may close one of the stands next season, as a cost cutting measure. Thats actually a sensible idea, but he didn’t mean it that way. He’s still in a huff, and rightly so. You should see what he’s written on the pub toilet walls at the top of Park Road.

Sadly, we hear today of the passing of Anne Williams, who campaigned tirelessly for justice for the 96 who died at Hillsborough, including her son.

May she rest in peace.

Kenny Dalglish scored in all six League Cup section matches in 1972, a feat no-one else has ever done, or will do, as the sections ain’t coming back. (Note, well, probably not) Good answers re Harry Hoods hat tricks , though.

Right, four more to fiddle about with…

Bobby Moore, Bobby Charlton, Jack Charlton, Tony Adams. Who is the odd one out, and why? Remember, all these questions have a Celtic connection, except when they don’t.

its tae dae with testimonials int it ? jack charltons testamonial is the only one with a winner !!! booooom

Which one is Murray, Chuckles and the Motherwell Billionaire?

I was there that night, exposed to the pishing rain in the Clock End. Thank fuck i only lived around the corner at the time They won 1-0 t boot. Highbury was a tip.

I endorse your views re games at 3pm Saturdays. As a ST holder only 10 of our HOME league games ..out of 19…actually kicked off at that time i.e. 3pm Saturdays. How can supporters and season ticket holders plan with possible travel and work commitments?

‘He’s still in a huff, and rightly so.’ I don’t understand why you’re bothered about Stewart Milne’s feelings. Do you really think 12-12-14 is the answer? At least Stewart Gilmour heeds the feelings of his fans. Celtic would be unlikely to end up in the middle 8 of an 8-8-8 set up, so Lawwell’s on safe ground over season tickets but you can understand why others are reluctant. Re. the league cup sections, maybe they should be brought back on a regional basis thus ensuring 2 more Celtic-Rangers games per season. Like the Poles we could als o bring back a 16 team top division, something the fans DO want. Why not, we’ve tried everything else and it might help us develop young Scots players again.
As for your question, I think Tony Adams is the odd one out as he’s the only one who’s Testimonial was contested by Celtic. But I’m probably wrong about that too….

Bobby Charlton was the only one to sign for Celtic (back then he had to sign a one day contract or something to play in a friendly / testimonial).

I don’t Tweet or Facebook. How about campaign to get a minutes applause at every game this weekend for Anne Williams. While you’re at it, the whole of Liverpool to give her a “state funeral” for a real mother.

I went to thistle v morton game last week – whichever team gets promoted will be relegated next season.
we do not have 16 teams in Scotland worth talking about.
If we are talking about reconstruction, we shoild be looking at 2 leagues (SPL1 & 2) of 10 with 2 other leagues based on a regional basis with a play off between the winners into the bottom of SPL2- the regional leagues should also have relegation and allow fresh blood into the leagues – replacing east stirling with spartans / auchinlech talbot