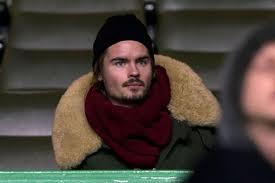 Defender Mikael Lustig complained of heart palpitations after he was substituted during Sundays cup semi final at Hampden;

“I played until the 77th minute when I was substituted, it was just really hard to run. How am I now? There is no problem, , I think I will play this weekend”, explained the Swede.

All this fuss over a wee flutter? Thousands of Celtic supporters also complained of palpitations during that game. In fact, I had to take a wee drink to calm them down.

Anyway, in all seriousness, lets hope it isn’t anything dangerous, and the medical team at Celtic keep a very close eye on him. Not in the sense that he’s going to nick anyones jacket or anything, but in the sense that these things can be warnings of other problems.

Showing his man management skills, Neil Lennon has told winger Paul Slane that he is always welcome at Celtic. The winger quit the club in January, and is currently with Motherwell. Lennon feels he needs to grow up and settle down.

Slane hit the headlines after a trip to Amsterdam saw a photograph or two end up on  twitter as he was standing behind some young lass in a queue, and she happened to fall forward and he seemed to bump into her. Oh, and their clothes had fallen  off.

Still, Lennon is there for him if he ever needs advice, and I am here for the lass if she is in any way needing counselling.

Down in Englandshire, congratulations are due to Malky Mackay, who has taken Welsh side Cardiff City into the English Premier league for the first time in thousands of years. The Ex-Celtic defender now has the chance to do it with the big boys, and we wish him luck. Might be an idea not to let Joe Ledley in on the news though..

“Its a great day, and its been a long time coming.”

Just for clarification, he was referring to his sides promotion, and not anything else going on today, say in London.

Incidentally, no matter how strong the temptation may be to turn your back on Thatchers funeral, try to resist. Remeber what happened to the Belgrano. Big Ben has been silenced as well, so get your own bell for the sing song afterwards.

The Celtic Trust are pleased with the response to their campaign to email your MSP  about police tactics and criminalisation of supporters. 10,000 emails have been sent, but more are needed.

The trust are right. There is strength in unity.

“The lady doth protest too much”-from Hamlet, Act III, scene ii, Queen Gertrude. More culture from the Etims , and the phrase could almost apply to under fire St. Mirren chief stewart Gilmour, who seems to be getting all the blame for knocking back plans to restructure Scottish football. Which is a bit harsh, and now he’s threatening to sue anyone who says it for slander.

Which is the tactic used , obviously coincidentally, by those he has been accused of colluding with.

Its going to get even messier, and surely the point here is that the chance to streamline the offices of power within the game has been missed, along with a fairer way of spreading the money around. The popular press seem more concerned with the amount of teams in any given division, well, perhaps which division one particular team should be in, when really changing the whole set up should have been the priority.

Gilmour stands accused of holding secret wee chats with owner of new club Sevco, formerly Rangers. Who, incidentally, would be the only club in Scotland to benefit if their old pals in the high echelons remained in office.

Either that, or it may be down to one or two other crazy stories floating through cyberspace.

Did Gilmour really say he wasn’t going along with any “Celtic rulebook”?

Are there plans for St. Mirren to allow Sevco to share their ground next season-Ibrox about to be denied a health and  safety certificate? (Apparently the stands are facing the wrong way ). Hampden is undergoing work to install a running track for the Commonwealth games from November onwards.

Both of the above are unlikely, but Scottish football is going through a strange time of late, and all sorts of  daft things are coming to light.

Take Matthew Lindsay in the Evening Times, for instance. Last night he claimed that Rangers fans would never forgive those who had ruined their club. Oddly enough, he didn’t mean David Murray. He meant those fans who had banished his beloved new club (poor sod still thinks its the same old bigoted bankrupt one) into Division Three.

But we have to expect this new onslaught supporting the Peepils team. They need to be fastracked, or they will die.

The rest of us, however, those of us who question what is in the media, and are aware that it might not all be quite what it seems, cannot forget the lies, the cheating, the corruption and the lack of remorse, and so there is no room for forgiveness.

(Thats Rangers I’m on about, not Thatcher. Honest . Gedbhoys poem on the main site sums up that woman perfectly.)

Ally Hunter was one of four different keepers who played in four consecutive cup finals from 1972-75, and he was the only one who featured in a losing team. Well done to Jimbo67.

Still in the seventies, who did something the others didn’t, and what-from these four; Kenny Dalglish, Dixie Deans, Lou Macari, Harry Hood. And its something no-one else has done, or will do.

Harry Hood..got my Dad to artex the pub. FACT

He scored a hat-trick against Rangers, who no longer exist

Dixie Deans once scored 6 in a game v Partick Thistle in 73 or 74?
Or he scored a hat-trick in 2 finals?

“All this fuss over a wee flutter? Thousands of Celtic supporters also complained of palpitations during that game. In fact, I had to take a wee drink to calm them down.”

I had to get stuck into the glycerin pills …

scored a hatrick in a cup final , infact did this in two cup finals agaainst Hibs .

They all scored in a Scottish cup final apart from Lou Macari??

Fairly sure Macari scored the winner vs Oldco in cup final replay in…?1972?

Is Dixie Deans the only one not to score against Defunct Rangers FC in a cup final?

In fact did he ever score against them?

Harry Hood..got my Dad to remove artex from the pub.

Why do the scottish media insist on perpetuating the myth that sevco were kicked into the 3rd division because of fans of the other SPL teams. rangers died, they never got kicked out of the SPL – sevco took rangers place and wanted (aided & abetted by the scottish media) to throw away the rule book and be fast tracked into the SPL rather than start life in the 3rd division were they belonged.
We’re being blamed for insisting that the rules were enforced.

still with the latest wrangle over craig whyte’s involvement, this really is the gift that just keeps on giving

Harry Hood is the only one to score a hat trick against rangers and nobody else can do it as rangers no longer exist.

Sitting in a bar in Slovenia reading this article. Really enjoyed it.

Kenny D tied his lase before he took a penalty which he scored against That Old and now defunct club from Govan,they used to play in a stadium now owned by Craig Whyte, I am sure most of you will guess who I am talking about, as I have given you enough clues HH