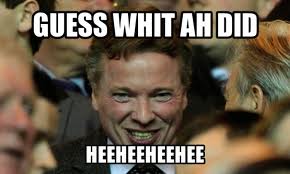 Neil Lennon is looking forward to wrapping up this seasons Premier League title in style with an eleventh straight home win. Of course, we need St. mirren to deny Motherwell a win, but the prospect of another title party in Glasgow tomorrow had the manager excited;

“I would be delighted, thrilled. Its a great feeling. Its a great sense of achievement and its been our priority from the start of the season. Obviously Europe was a high in the season, but to put another title on the record of the club would be brilliant and would be great for the players as well as thoroughly deserved….

We are at home and our home form has been sensational for the last seven or eight games. We’ve won ten in a row at home, and I want to maintain that. I want us to play with a bit of swagger thats been missing for the last couple of weeks.”

Next weekend has a trip to Hampden for the Scottish cup semi final, and after a bit of a lull after exiting Europe, it should, in the words of the song, “be enough to make your heart go oh oh oh oh..”

Lennon spoke of this season further.

” I don’t think we’ve been complacent,I just think that some players of late haven’t been playing to the form that we know. There is certainly no lack of complcency. I certainly didn’t see any onSunday. I’m just looking for a bit more quality from a few individuals. We have had a comfortable week training and are really looking forward to the game.”

Kris Commons could return, having done some light training, but there are still doubts over Mikael Lustig and Adam Matthews, and Scott Brown, Lassad Niouiou and James Forrest won’t feature.

Forrest and Lassad may be in contention for next weeks cup game, but its unlikely.

The gaffer has also vowed to defend his charge of swearing after he called a St. Mirren player names.

“I can’t really talk about it at the minute but needless to say I will be defending my case as vigorously as possible. I don’t want to say anything to prejudice the case against me. I’ll speak to the club oficials and lawyers and we will come up with a defence to defend myself as best I can.”

Jim Goodwin, the victim of the foul tirade, said

“If the SFA wants me to come in and speak, its no problem at all. I certainly don’t want to see Neil Lennon charged with that sort of thing. Its pathetic. I had a smile on my face when it happened. Please, give the guy a break.”

Will common sense triumph? In Scotland? Answers on a postcard…

An Everton website has the Goodison club lining up Lennon as a replacement for Davie Moyes, who is interesting Schalke. This story has been in the Daily Mail and the Mirror, and reached SSN this morning. Lennon, they claim, would relish a fresh challenge.

Still, at least the website had a picture of Lennon laughing 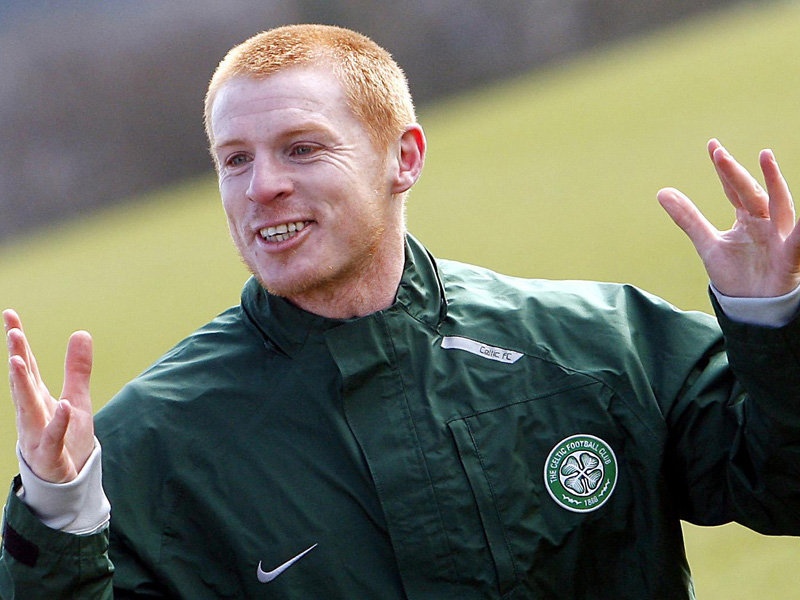 Presumably taken just as he heard of the story, giving him a chance to demonstrate how wide of the mark it was.

St. Mirren forward Esmael Goncalves has accepted a two match ban for his simulation in last weeks match, and he will also be competing with champion Eddie Eagle Edwards in the next series of that programme where celebrities chuck themselves off a high board into a bucket of water, which is rumoured to become more interesting next time with the removal of the water.

Now, anyone with an eye on the main news will have noticed a despotic leader, who has a jealous eye on a wealthy neighbour, bemoaning the intervention of  outsiders and threatening all sorts of armageddon.

And that Korean guy has been at it as well.

Charles Green has been noticeably ageing and becoming more stressed of late, culminating in a rant at the recent League reconstruction meeting, where he accused the SFA of trading while insolvent. Now, presumably because he didn’t swear, he hasn’t been charged with anything. but its a sign he is starting to feel the pressure.

Here he is a year or so ago 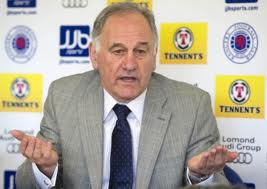 And fast forward a few months 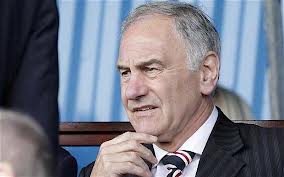 And here he is this morning when the story broke in the Sun that Craig Whyte actually owns the club and Green is just a front man. 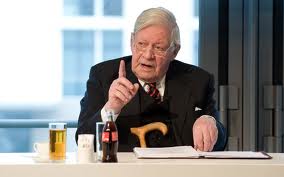 With all sorts of accusations levelled at Green, he has countered by saying he just told Whyte whatever he wanted to hear to “prise the shares away from him”.

Poor Chuck. He’s also been told by an independent arbitrator that the legal costs of five players who refused to move to the new club are his to pay.

Do you remember that Only Fools and Horses episode where the guy faked a heart attack to make his getaway?

Anyway, Billy McBiggott, our Larkhall reader, is quite relieved that Green has never told Rangers fans, or potential investors, whatever they wanted to hear, to prise their cash away from them…

Whyte has come back, and he isn’t going away any time soon.

There has to now be a case for the SFA, if they haven’t the balls to do it themselves, to hand the whole file over to FIFA, and ask them to insuspend the club and fully investigate what on earth is really going on over at Ibrox.

Actually , we  know the answer to that, but someone needs to tell everyone else.

The old club is dead, the new club is dying, and the vultures are fighting over the carcass.

But, that hasn’t stopped Ally McCoist from planning for next year. He’s already looking to strengthen his tea, and in a return to the days of signing top, top names from abroad, he’s looking at Chepo striker-thats the name of the club, not a summary of the price tag- Anibal Gody.

Gody currently plays in Panama, as in Panama hats, which are made in Ecuador, and is earning around £2,000 a year. Which means another bucket collection at the game, and McCoist may be able to afford him. Now, with the chief scout sacked to make cash available for Chuckies promotion bonus, its difficult to see why he has appeared on the radar for Rangers. Until you read this line, from Gary Stempel, who used to coach the national team over there;

“The footballers are street kids, and every one of them has a dysfunctional character.”

Well, if its dysfunctional characters you are looking for…

We are an educated and cultured lot over at Etims, well, I went to a museum once when it was raining, and we thought this would be of interest to our equally cultured and educated readers.

Artist Frank To has a new exhibition in Edinburgh. his paintings have been inspired by Dantes Divine Comedy. Each painting reflects the character of a Glasgow underground station. 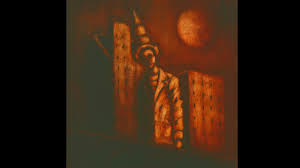 This one is called “Virtuous Pagan” and is based on Edmiston Road at Ibrox with Limbo in Dantes 14th century poem representing the regeneration in the area.

You don’t get that on the Huddleboard or KDS, do you?

There was a clue in the question as to the answer to yesterdays odd one out. Craig Burley has never worked for Sky Sports, ( well done to Michael Reid ) showing they do have some sort of standards over there. As it would have been easy to just choose whichever one of many possible answers were suggested, the letters tv appeared in the question, as a sort of guidance and also to prove that I have thought of an answer, and not just choosing the best one from those submitted.

Incidentally, there were some crackers again.

How about these four to round the week off?

Get the jelly and ice cream in. It might just be a great weekend.

Stevie Fulton is the only one with a face like a well skelped arse.

stevie fulton is the only one to star in the goonies?

Fulton is the only one not to score on his debut

Pish easy, its McGeady, he disnae have an o in his name! Its that or a Baggio, Bagged-the-Big-One, BagsPacked, or Baguette link!

Aiden McGeady. Irish international. The other three played for Scotland.

ah went tae st mary’s skool ( in greenock 64 -67 (MR MELDRUM) OTHERWISE KNOWN AS THE MONSOON CAPITAL OF SCOTLAND A WEE PISS STINKIN’ RAT HOLE OF A COUNTRY ALWAYS WILL BE, RUN BY PRODISANTS ORANGIES AND THE CLAMMY CLAW MOB ) wi stevie phooltin’s,dad and his uncle, norrie and geordie damn good fitba players and a noo his granda wee toolti GREENOCK CELTIC SUPPORTERS MAN, every one good celtic folk, SO IT’S STEVE FULTON FUR ME, AS YI CAN VERY WELL SEE AND ATTEST TO MY FURTHER EDYUCATION YEARS IN INGLISH AND FONETIC GRAHMUR WERE WEEL WASTED,PS CUMON IHOOPZ PPS IZ SCOTLAND STILL RUN BY THE LYMEEZ

Stevie Fulton is the only one that resembles a handsome Hun

Commons is the only one not born in Scotland

Kris commons – he wasn’t born in scotland, the others were.
Aiden McGeady – he plays in russia, the others don’t.
Steve Fulton – the only one to have played for hearts & have 3 boys who play professional football.
Bobby Murdoch (RIP) – won the big cup & the only world class player amongst them (also the only one to become a manager)

I used to play as Sevco on the auld Champ Manager and lead them to successive relegations etc.

Fair play to whoever is behind this panto for making my childish lonely fantasy come true, Jim must have got my letter before he popped his dodgy clogs

The quiz is as open ended as Chico’s big finger – it could be in anyone or everyone! But then again he has been exposed as Whyter than Whyte and now his big finger could be burny, burny in the big pie – not the one Ally bought – but the one the SFA have hidden in the back burner. Still, I will go for Stevie’s failure to collect any trophies but that too could be down to the big porkie pies during Murray’s reign. The three kings of Ibrokes might just be heading for dethronement at HM Pleasure. To conclude, being well advised that I am well outside technical capability, fookkk (French as in BIGOT) the lot of them!

Stevie Fulton is the only one who looks as if he regularly goes dookin’ fur chips.

The others made their debuts in a cup semi final at hampden.

The odd one out is always Craig Burley. Period.

Clue in the question…