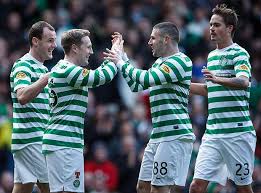 So the title wasn’t clinched before the split after all.

James McFaddens late equaliser for Motherwell  against St. Mirren meant that despite a convincing 3-0 win over Hibernian at Celtic Park, another point will be needed to make mathematically sure. Although to throw it away, Celtic would have to lose every remaining game 7-0 , and Motherwell would have to win all theirs. Even Ally McCoist would probably be able to avoid that scenario, were he in charge.

Its perhaps just as well , really, as an awful lot of Celtics support must have remembered they’d left the gas on, because even with St. mirren still leading, the ground emptied somewhat alarmingly on Saturday.

“It would be nice to win it at home as we haven’t done that for a while. It would be nice to have a full house and give the fans something to enjoy. As for today, I was looking for a good performance and I got that. We were dominant. The strikers were a lot better and Anthony stokes and Gary Hooper were the catalysts fora lot of good stuff, so I am really pleased.”

The game itself saw the attacking triumvirate of Kris Commons, Anthony Stokes and Gary Hooper restored, and it produced some good moves , great passing and a couple of goals. Commons seems to have put his woes behind him now, and has returned a more than healthy sixteen goals this term, as well as contributing to a few more.

The other goal was a hand of god effort from Mikael Lustig, who to his credit, looked suitably embarrassed as he trotted back to the halfway line. Incidentally, thats the first time Celtic have beaten hibs in the league this year…

So, we will have to wait until later today to find out where the title should be won. Common sense, Sky TV and a plea from Neil Lennon may well see a lunchtime kick off at home a week on Saturday, but the SPL might not see it that way. So expect to be travelling to Dingwall or Inverness the following day for a morning start and a battle for tickets.

Its refreshing, and a massive plus for Scottish football that the top six this year don’t comprise the usual suspects.

Theres no Rangers, (well, theres no Rangers full stop, if you know what I mean) no Aberdeen, Hearts,  Hibs or Kilmarnock. And DundeeUtd only made it by the skin of their teeth.

Only Motherwell have held up since last term, Tannadice club excepted, as St. Johnstone, Ross County , and Inverness join the hoops for the last rounds of games. If nothing else it gives a freshness to the last few games, with European places up for grabs, which may include debuts on the big stage for the Highland clubs.

Its not just the senior team that are going well. The Under 20s, managed by John Kennedy, are nicely placed for a double of their own, and may even win a treble.

They are currently involved in the Al Ain Championship in Abu Dhabi, and beat Dinamo Zagreb in their first game 1-0. With Zagreb having already beaten Benfica in their opener, the Young Hoops need only a draw against the Portuguese to win the three team group to progress to the semi finals.

St. Mirren have this morning announced that they will oppose plans to reconstruct the Scottish senior football scene, which will surprise no-one who saw Charlie Green at last weeks St. Mirren -Celtic game. Looks like the black and white tie he wore wasn’t one left by a Juventus player after all..

If another SPL club opposes the 12-12-18, then we are stuck with the 12-12-10-10  that we used this year, which provided a fair and competitive environment for everyone. Which is obviously why St. Mirren are against change..

Meanwhile, the reappearance of the bold Craig Whyte provided much entertainment for anybody in Scotland with a sense of humour over the last few days, with the Green Brigade even bringing the portion of the Horseman banner along to Celtic Park which contains Craigy riding into town. 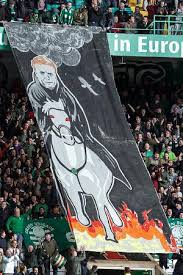 The banner was passed around the ground to much mirth and merriment, showing that the Celtic support still cares for the troubles of its once might foe.

And boy, are they in trouble. The new club, that is. Tales of dodgy payments into mummys bank account, Craig Whyte-deemed no a fit and proper person to run a football club-still having ownership of Ibrox, or murray Park , or both, led to straight talking Charlie Green coming out with guns blazing, and he didn’t care who he hit.

Green, however , was clearly rattled. He referred to Whyte as “little google eyes” , after Craigybhoy had claimed Green was merely his frontman, saying that the bold billionaire had “almost single handedly , he dragged towards the brink of oblivion”

As entranced Celtic fans opened the popcorn and pulled up a chair in front of the telly, Green then referred to his business partner Imran ahmed as “my little  Paki friend” and a former team mate at Worksop Town as “Darkie ” Johnson.

Strangely enough, there has as yet been no media outcry, and no charges brought against the man who has clearly jumped back a few centuries in time to join everyone else at his “institution”, but the end is now clearly in sight for him and his cronies.

Ally McCoist, wakening up to what is going on around him, has demanded cash to buy his “own players ” for next seasons campaign, presumably in full knowledge that he won’t get any decent ones anyway, which he can then resign with dignity, bonuses in the bank, while Green disappears and Whyte gets the blame again.

Looks like the success of last years pantomime has encouraged the producers to do a sequel.

It could all start very soon. Cenkos Securities oversaw the recent public offering (which were shares, not a goat at the altar) , and any claims on asset ownership would have had to have been disclosed to them. Wonder of they were?

Did they tell them? City regulators don’t arse about like courts and lawyers, so we will soon know.

Now, Aiden McGeady had to work on building his weight up, whereas Commons, Murdoch and Fulton had fairly well known problems keeping theirs down. Hence the word “round ” in the question. So, no-one got it right.

Today, Davie Moyes, Pat Stanton, Tosh MacKinlay and Stephen Pressley are the four to think about today, one of them shouldn’t be there. Try not to draw a blank this time.

It can’t be the obvious “Pressley’s hun”, so I’m going for the fact that Tosh is the only one never to been a manager.

Tosh McKinlay was the only one who I saw getting hooked off a lassie outside Panama Jax. If its not him, Stanton is only one without a Y in his name!

Pressley was the only one to score for Celtic…..

it has to be Elvis cos he ran wae’ the hunnish hoardes frae hades 4 a wee while bless his Barnicles, remember tae GOOGLE the wise EASTERN PROVERB FOR A WEE LAFF @ FAT SALLY & CHICO VERDANT , IT STARTS OUT “HE WHO KNOWS AND KNOWS, HE KNOWS HE IS A WISE MAN SEEK HIM, HE WHO KNOWS AND KNOWS NOT HE KNOWS HE IS ASLEEP WAKE HIM, BUT HE WHO KNOWS NOT… AND KNOWS HE KNOWS NOT…. HE IS A FOOL (S)HUN HIM, GOD BLESS “SISTER MARY PAUL HEADMISTRESS OF ST LAWRENCES SCHOOL GREENOCK” WITHOUT HER I WOULD NEVER HAVE BEEN MADE AWARE OF WONDERFUL POEM

I had Big MELDRUM too, but left St Mary’s 3 years ‘afore ye.

Been exiled for 40yrs, keep up the guid work, you make me laugh

I was gonnae for for Stanton never scored a goal for us but after a google check its way different than i first expected maybe. Pressley is the only one to have scored for us? Was sure Tosh scored for us but not according to google!

Can’t be goalscorers; Moyes and Pressley scored, the other two didn’t. Agree Tosh is only one to not manage, but that seems a bit obvious. I’m going for Davie Moyes who is the only one to make his Celtic debut before he was 30 years old.

Terry Wigan based on your clues.

Moyes as all the rest came to Celtoc from Edinburgh.

Tosh McKinlay was the only one Joe Miller loved playing against.

Tosh McKinlay was the only one not to score for the Hoops.

john mccullagh – i’ll dance on your grave mrs thatcher, £0.69 on itunes, lets get to number one! spread the word!

https://itunes.apple.com/gb/album/ill-dance-on-your-grave-mrs/id448060567 Buy track one, lets give that c**t the send off she deserves!

thatcher good riddance to bad rubbish lizzie next we hope

Or its because Davie Moyes never got a winners medal for us whereas the other 3 did!!

I guess one can not complain about pantomimes at the wrong time of year when the actors are up for it all the time. So, it’s Sevco for ever for the moment, guess. One good thing is the ugly sisters look as good ever though Button’s could have great difficulty getting into his uniform. I hear the hit songs will range from “Green(s)leaves”, Pie, Pie Bluebird and Whyte Christmas. On second thoughts, I’ll leave the humour to you ans concentrate on the quiz at which I am an acknowledged genius.