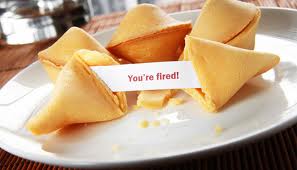 Anyone else get the feeling they woke up in Lalaland this morning?

We have the North Koreans declaring they are about to unleash a nuclear strike on the USA, which has to trouble any right thinking person. Their new leader, well, newish-he got the job after his dad died a couple of years ago-has decided to make a name for himself. Thankfully, this hereditary way of choosing a leader doesn’t happen in he western world, otherwise you get fruitbats in charge. Well, if you don’t count the Bush family, or the Clinton attempts.

And at least Mark Thatcher didn’t show an interest in politics.

So how do you deal with this headcase? Easy, put him in charge of a Scottish football club.

That way he won’t even be allowed to swear at a football match without finding himself on a charge, far less threaten hundreds of millions of people with armageddon. Actually, in Scottish football we are used to threats about Armageddon, so he might not have been taken seriously.

Yeah, swearing at the football. For some of us , thats the only reason we go to the football, to let off steam and swear at either our own , or the opposition players.

Neil Lennon has found himself facing  a charge of  “failure to behave in a responsible manner as an occupant of the technical area by the use of offensive,insulting and abusive language.”

He has until 10 April to respond to the charge, and needs to be careful with his draft response, which so far, we hear, contains just two words, one of which is “off”

This hard on the heels of the news that two supporters of the New Rangers club have been fined and given a football attendance ban of five years for singing and waving their arms about at a game.

The Fans against Criminalisation are holding a demo in Glasgow this weekend, George Square, at around 12.30. As many as possible should attend this event, as it is starting to look like football fans are being used to bump up the arrest and conviction figures for someone at Strathclyde police who seems hell bent on making a name for himself. 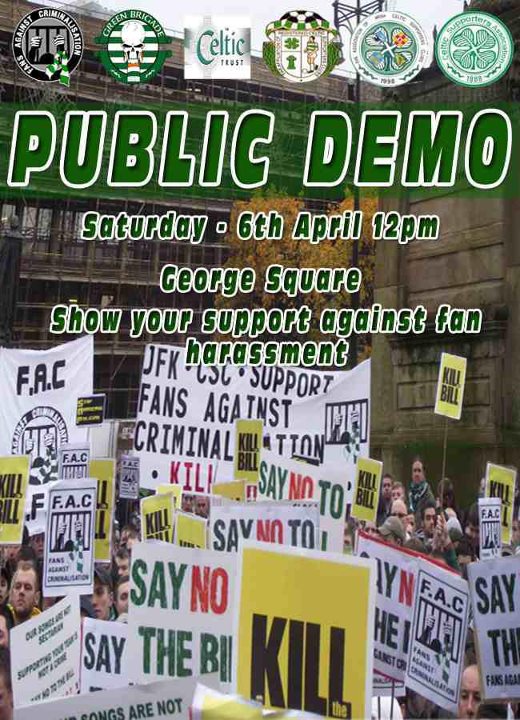 Some, however, would argue that surely a wee bit of common sense, and perhaps a warning to behave here and there would save an awful lot of time and effort for everyone.

We have seen police-in bright yellow jackets with “Unacceptable Behaviour Team ” stamped on them, take political correctness and heavy handedness to an entirely new and unacceptable level.

So, if you are in Glasgow on Saturday, nip along to the demo, and make your voice heard.

Just be careful walking to the ground after wards, and try to keep a reasonable distance from the guy you are chatting to as you amble along. Which will probably be a policeman, taking time off from catching criminals, instead just hell bent on creating a few.

Silly season continued elsewhere, with David Longmuir of the SFL telling radio Scotland listeners that not only ids he a “Rangers man” , he is a man for all the other clubs as well, which doesn’t actually explain why he is pushing the agenda of the new club and their idea of 14-14-14, which as far as they are concerned will see them in the second tier of the senior game. He neatly dodged the question about whether or not he was about to take a job working for Charles Green…

Working for Charles Green isn’t exactly job security, unless you happen to be a piss poor manager. Striker Francisco Sandaza, admittedly not the brightest candle in the display, has been sacked after his chat with a Glaswegian taxi driver, who posed as a football agent, became viral on the internet.

Quite why Sandazas revelations are a sacking offence is unclear, but it has given Green, at least in his own mind, an opportunity to continue cutting costs over at the cash strapped club. (Its worth noting hear that several tradesman over there have allegedly downed tools, refusing to do any more work until they have been paid for that which they have done so far…)

The club, in a statement, claims that Sandaza was in a “material breach of his contract of employment”. Of course, he can appeal, or even sue for wrongful dismissal, but he had better be quick, as , combined with the dismissals of the physio, the chief scout, and the first team goalie-alright, he hasn’t been dismissed, just told he’s getting a lot less money if he stays- then it looks like the club may not be around by the time it all comes to court.

Anyway, there is, in case you had forgotten, a chance to win the league this weekend. Celtic host Hibs on Saturday, and Joe Ledley, speaking in the Celtic View-presumably so no-one will hear him-reckons that Celtic always “feel they can score goals at home and thats what we will need to do.”

You can’t deny, it sounds like a riveting interview.

Efe Ambrose was also speaking in the View, and he said “Everyone will train a little bit together again and we will come back to where we were before.” Which probably made sense to him..

“In football it doesn’t always go the way you planned . It can go an ugly way and sometimes it can go in a good way.”

Getting off a plane after a flight half way round the world and playing the same night against one of Europes top sides can also have an effect, but he didn’t mention that.

The Celtic View. In depth interviews with cutting edge comments.

Paul Hartley, the former Celtic midfielder now manager of Alloa has stated his desire to see Rangers fast tracked to the top tier of football, presumably so his club misses out on the joy of having their support spend a couple of days in town, and another manager , Alan Pardew, who has always spoken highly of Scottish football, has asked Neil Lennon for advice on beating Benfica.

Like I said at the top of the page.

Today we woke up in Lalaland.

Spartak Moscow are the only team that Celtic have beaten, of the four named yesterday, in a penalty shoot out.

And tell me whats different about one of them.

Burley only had the one spell playing for Celtic.

Craig Burley-the others came back to play for Celtic after leaving.

This is correct, but not the answer we are looking for.

Is the answer something to do with false things ie colour of hair, teeth and face

Charlie Nic doesn’t have a dentist on speed dial?

Nothing, they are all connected to the word FANNY

Burley only signed for us once, the rest all made a return to Paradise. And all three provided ample evidence for the law of diminishing returns.

OK it’s not the returned to Celtic things, in that case here are few possible answers then;

Craig Burley is the odd one out.

McAvennie doesnt continuously slag Celtic off in the press.

One of them has a brain cell. Can’t tell which though …

Looks like Kim Jong-un just neuced my comment. I hope you will retaliate, Ralph, as it was priceless. On the other hand, keep you heads down in George’s Square on Saturday, guys, the fair minded fuzz might just have hijacked it as a means of keeping you in line – or single file even!

I will repeat my quiz answer as I am sick of missing out on the prizes.

h h (capitals when my posts are found)

They’ve all scored against Celtic, apart from Craig Burley?

Andy Walker – he can’t drink a bottle of buckie in under 30 seconds. The others all can???

While we are being kettled on Saturday afternoon a.d we start singing will the zunday mail run the headline the singing kettle? Just a thought.

Macavennie hasnt betrayed the club and its fanbase in an attempt to make a career as a mouth piece for a satellite tv company…..by spouting utter pish whenever a microphone gets placed at his nose…..The rest have quickly forgotten that they may be due an ounce of thanks ti a club and a support who contributed in making them very wealthy men.

McAvvennie – he’s the only one to have got a “gummy” gammy from Burley.

Andy Walker, he’s the only one not to have been in a Scotland World Cup squad.

burley , after all he is a bun,proddie,mason orangeman

I still say it’s the sawdust. Frank MacAvennie’s is from green timber. The rest is from dry, rotten stuff that has been “lying” around far too long.

Craig Burley is the odd one out. The rest are allegedly famous for their coke habits.

Weefeeski, don’t think “proddie” is clever insult. Do you? Will you be deleting or editing that comment? Haven’t come across it before in CQN and I was planning to keep it that way. Think you’ll find many “proddie”s with important parts in Celtic’s history.

However, I note your preference for “bun” over hun. Is that self -censorship, a typo or plain stupidity? I think Hun is an acceptable insult, unlike “proddie”. What does the group think?

Andy Walker’s the only one who went to school.

MacAvennie is the only one to have pumped a page3 burd
whilst reciting the lyrics to Auf Wedersehen to Crosmaglen..