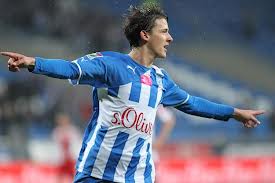 Aleksandar Tonev, the 23 year old Bulgarian winger linked with Celtic for £3m by the Sun, has been priced at £2m by his agent, who says that a deal needs to be done quickly because Lazio are interested. A lot of money for someone who can’t spell his own name. Thats him in the picture, wonder who his influences are?

The agent, Gianfranco Ciccheti told the Daily Record, oh what does it matter what he told them, they just print what they think he meant anyway.

It appears a deal couldn’t be done for the winger in the winter break at £1.5m, but since his hat trick against Malta its now £2m. Cicchetti said-or is reported to have said;

“Its best to do a deal as soon as possible because that price could rise further if he keeps going like this.”

In the same way as Ally McCoist might get the Manchester Utd job if his team keeps winning leagues.

Midfielder Joe Ledley says he’s not worried about attracting players to Celtic, as opposed to the MSM who think everyone will be out the door as soon as summer comes. He said;

“I don’t worry about attracting new players to Celtic because you just have to look at the Champions League this season. It has been a fantastic achievement.”

“To come to Celtic and have the chance to play in the Champions League, the best competition in the world, is an obvious attraction.”  He didn’t say whether he had mentioned it to young Welsh playmaker Johnny Williams, who was outstanding against Scotland, when he came on, and Croatia this week, but you kind of hope he has. Or will.

Ledley then went on to say nice things about Cardiff City, whilst at the same time saying he’s happy at Celtic.

In the U20 Premier league, Celtic took their lead at the top back to ten points with a 3-1 win away to St. Johnstone, with goals from Jamie Lindsay, Jackson Irvine and John Herron.  Two up in the first twenty minutes, the youngsters never looked in any trouble, and another title seems to be on its way to Parkhead.

The womens season has started again, with Celtic currently seventh, on 0 points, having not actually played yet, where some sides already have a couple of games under their belts. Or aprons, or whatever they wear. Rangers have a team in that league, and one can only imagine what they look like.

We rang their winger for a comment, but she was having a fag. 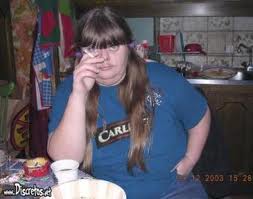 Maybe should have pointed out not to eat while you’re reading this.

Meanwhile, over at Dunfermline, now in interim administration, owner Gavin Masterton has explained what has happened.

“I want to personally apologise to all who will now be upset and damaged by todays announcement. Money and jobs will inevitably be lost, but everything will be done to ensure a rapid return to normality.”

Dunfermline have not had audited accounts since April 2011. One has to ask why its taken this long for this to come to anyones attention, especially at the SFA.  Surely not another instance of Masonic back scratching and knob fiddling ?

Masterton, Ogilvie, Murray, Bank of Scotland…. Just you wait till the papers hear about this one! Though try not to hold your breath.

It looks like supporters of new club Rangers have finally sussed out that Celtic too, are indeed a new club. Showing a remarkably stubborn refusal yet again to deny reality, the Sons -or is it grandsons by now?-of William are tweeting pictures of two different Celtic badges-one with Athletic Co on it, and one without.

Well, thats that then. 125 years of history down the pan.

Someone really needs to get help for these people. They still can’t see that their club is dead, the victim of mass corporate fraud and mismanagement, instead clutching at absolutely any straw that Celtic might have gone the same way when Fergus McCann paid off the debts after taking over the club.

Theres a clue in the phrase “paid off the debts”. Still, as the tribute club rides towards another crash-well, technically their first crash, shares are down again- and it serves them right. Silly sods.

The Scotsman , and its sister paper Scotland on Sunday, are to cut costs and between 25 and 30 journalists are expected to lose their jobs. No-one likes to see anybody put out of work, but if they had done their jobs properly, say when a major sporting scandal was emerging, then they would still be there. It doesn’t look like this paper, which hints at quality journalism , but never quite seems to deliver it, will be the only one either.

Print media is dying, and there will be more than a few happy to read its obituary, especially in Scotland.

The answer that I wanted for the odd one out yesterday was Kenny Dalglish, as he is the only one of the four to have won a trophy while Celtic boss. Greenjedi got that one, but there were some other excellent, accurate answers as well. Including a laugh out loud moment, when it was mentioned that Venglos spoke better English.

Same again today, then. Who is the odd one out , and why?

Regi Blinker. All the other three were, or went bonkers!

Paolo DiCanio, he’s the only one who went on to become a manager.

Berkovic as being the only one who was kicked in the head by a team mate (albeit at West Ham) while the rest all seem to have been dropped on their heads as babies?

Sensible answer time? – Was Colonel Blinker the only one to pick up a medal or 2 in his time at Parkhead?

On the subject of Sevco, I don’t even engage in debate with zombies anymore re dead club/new club. These folk could be on fire (literally) and they would deny the obvious fact when you kindly pointed it out to them-“Whit you talkin’ aboot? Ah’m no’oan fire, you’re jist obsessed!”.

You are as well as talking to a deaf dog.

Di Canio is the only Facist C**T.

Blinker…he got caught pissing up an alley, the others pissed Celtic about

eyal berkovic, he lites the menorah,( so does james caan and the late dinah shore( a ),), aw’ the rest are still clinging to an ancient christian creed,p.s. am aff tae kiss the cross

Regi? We bought the others with real money, but he was added to the di canio to sheff wed deal as a kind of cowardly makeweight? But in keeping with your obsession with actually winning things n that, its probably the other answet, he won a league and league cup, the others just entertained but won bupkiss?

IS CADETE THE ODD WAN OOT, CAUSE ITS BEEN RUMORED THAT WE ARE LOOKING TAE BUY THE OTHER 3 IN NXT TRANSFER WINDOW.. WELL WE GET LINKED WI EVERY OTHER MAN AND HIS DUG BY THE DICKS IN THE MSM..HAIL HAIL, GOD BLESS THE CELTIC+

It’s Blinker. He’s the only one not to have scored at Ibrox although we all know what happend to Cadete’s “goal”.

Cadete was the only one to break the BBC sound equipment when he scored. Albeit it was the fans that made the noise.

Regi is the only Chubby Chaser – he pumped a couple of fat birds i went t uni with. Could be found in the Velvet Rooms every Tuesday night on the prowl for some big love!

Eyal Berkovic is the only one circumcised?

Cadete. The saga surrounding his registration was the only instance when the SFA have actually been caught out and punished for their dodgy dealings. We await the next occasion with bated breath (which we’re not holding)

Berkovic was the only one booted in the head by John Hartson……shame that big bad John never kicked the heads off of the shoulders of the other three clowns.

Hey presto! It’s gone again. Where’s my wand and top hat. I enjoyed the read though not pleased with the photo of my carer.

Bercovic is the only one who didn’t request a transfer.

PB, I don’t know what was in your original post but in those few words you made me laugh out loud – twice!
Hail hail