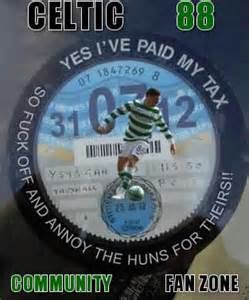 The tune, popular at Celtic Park contains many hidden sectarian messages and in a couple of lines there are hidden references to the IRA, anti-protestantism and even a sickening reference to bestiality.

Apparently, they don’t care what the animals say.

And that concludes my application for employment at any one of Scotlands mainstream newspapers.

Actually, the video shows Lennon having a laugh, and a wee boy having fun, but thats unlikely to make any headlines. When a Celtic boss goes out of his way to put a smile on supporters faces-mine included-in this way, then only the highest praise can suffice.

Well, with another international match this week-and loads of players away, Lennon took time out to relax, and deserves a lot of aplause for what he did. I tried to embed the video, but failed miserably. It is out there though, and will bring a wee glow to your heart.

Kris Commons won’t feature in Scotlands game against Serbia, and Paul Caddis-remember him-has joined the squad in place of the banned Robert Snodgrass. And thats that for Scotland.

Its snowing everywhere, so a few of the games, including N. Ireland -Israel and the Scotland clash are in doubt, so hopefully we can watch a re-run of Eastenders or a documentary on embarrassing fat bodies instead.

Speaking of which, Derek Johnstone has been shouting about 140 years of history again on Radio clyde, which by now must have an audience which runs into dozens. The radio phone in, largely due to editorial control, has long since diminished in credibility, and its hard to find one with reasoned, thought provoking debate. In fact, its impossible.

Surely someone is brave enough just to face supporters and give an honest opinion, based on facts?

Wecould try that as an Etims podcast , I suppose, and wait for a Mr. Green of Govan to call. Perhaps even a Mr. McCoist, who would tell us how much he is protecting the youngsters in his team, such as Kane hemmings, who isn’t 22 for a couple of months-as opposed to the likes of Tony Watt and James Forrest who won’t be 22 for years.

In front of thousands of empty seats, New Rangers were held by Stirling Albion, and the rookie Rangers boss has been quick to defend the performance, and its starting to look like his supporters just aren’t wearing it anymore.

Billy McBiggot, our own correspondent on all things from the darkside slated STV for another tweet which tried to clarify the newco /oldco situation, by simply saying a club is the entity which holds the SFA licence. At least thats what I think they meant….

RFC officially tweeted that “Rangers have brought great honour and distinction to Scottish football throughout these 140 years”, crediting the quote to SFL chairman David Longmuir, who seems hell bent on a job alongside James Traynor at the Ministry of Information.

Allof this wordmongering should be of interest to Gavin Masterton, who will announce later today that Dunfermine will go into administration. Armageddon, it seems , has arrived as another Scottish club is about to die. Except, of course, the MSM will tell you the other, bigger club hasn’t died , and it will be interesting to see how this one is reported.

Richard Wilson, possibly the most blue nosed journalist in Scotland (which is no mean achievement) , said in the Herald today that “the company that owns Dunfermline will be placed into administration, in much the same way that when Rangers began to enter their death throes he said it was the “club”

(A wee aside, the Rangers Group, formerly Wavetower, still lists two directors, Whyte and Ellis, and is not in liquidation. As of 25 March however, they have received a strike off notice, for failing to produce accounts. Its on the Company Check website. So, it wasn’t the holding company that was liquidated after all-must have been the club. But we all knew that anyway. )

You have to feel for the Pars, after all, its where Jock Stein made his mark as a manager. Older fans will remember their six goal  drubbing of Everton in the snow.

Elsewhere, the Sun has Celtic looking at Bulgarian winger Alexander Tonev, as the press have now ran out of Celts to tout for a move, and have hit on the idea of linking us with players as a way of shifting some of those big piles of paper that are left unsold in shops up and down the country. He is rated at £3m, but not by anyone who doesn’t wok at the Sun, and is wanted by ……(fill in random names of “crack” European sides)….

Now, for all of those who like to keep their fingers on the pulse of the fashion and accessory world, heres the latest in Celtic themed attire, presumably designed for the select few of us who like to watch Jeremy Kyle and think that jobs are for other people.

Bhold, the Celtic onesie, for those of us too inherently stupid or lazy to wear more than one item of clothing per day. Looks like another winner for the design team.

A lot of us would have felt our age yesterday when Mark burchill became assistant boss at Livingston. Mainly because it just seems like yesterday that the Scottish Michael Owen-ie usually injured-is now in his thirties, and to us he never seemed to reach twenty. Anyway, good luck to him.

Celtics biggest win in the SPL is a 9-0 crushing of Aberdeen, which still gives the Dons fans nightmares. We’ve rattled in a few big wins over the years, whats the biggest in Europe?

https://www.youtube.com/watch?feature=player_embedded&v=hEUtFAJlJw0 (thats the link to the Lennon video) It might work.

Surely you mean the Ministry of MISInformation?

2-1 versus Inter Milan, or 9-0 versus KPV Kokkola!! I know which one i regard as the biggest!!

You can click on that one and it takes you to the Lennon video.

All this link stuff, I miss the old days of answers on the back of a postcard or a sealed down envelope

Welsh side inter cable tel took an aggregate spanking from us if memory serves.

Lovely wee video. Today’s Daily Record carried a hyperlink. It also gave the tooth fairy’s home address and their neighbours, Lord Lucan and Shergar. Did we not put 9 past Rosenborg Trondheim too, in the days when Norwegian football was even worse than Scottish?

last night i went to see australia play oman in a world cup qualifier in sydney. when i ordered my ticket on line i was informed there is an active area which is, and i quote :

” The Australian Active area is an aeaa designed for active supporters who are extra passionate and vocal in support of Australia. by purchesing tickets for this area you may be required to participate in active supporter activities. fans in the Australian active area are likely to stand for the duration of the match” imagine that eh. HAIL HAIL.