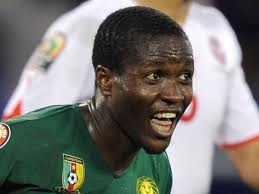 A Phillip Twardzik penalty after 76 minutes put the youth team into their Cup Final after a 1-0 win over Kilmarnock. They will face Dunfermline in the final next month, and it might be worth popping along to Hampden to watch a Celtic team lift a trophy there. Unless Dunfermline have gone by then, of course.

The report on the official website suggests a very close game with several chances at both ends, and there is no reason to suggest the final will be any different.

Celtic are at St. Mirren at the weekend, and are planning a guard of honour as the Paisley side , in recognition odf their recent League Cup win;

“I think its right that the occasion is marked in the proper way, so we will look at doing something.”, said the Celtic boss, through gritted teeth.

With only international football to provide entertainment over the weekend, and entertainment here is used in the loosest possible meaning of the word, the papers have had to do a wee bit of thinking, and turned to the time honoured scoops of players leaving Celtic this summer.

Fraser Forster is wanted by Chelsea, Gary Hooper by Aston Villa, although Norwich may well want to pair him up with Ricky van Wolfswinkel, and of course Victor Wanyama is wanted by everyone.

Refreshingly though, there is also a player who might be coming in, or coming back, to be more precise. Landry n’Guemo, the defensive midfielder we thought we had forgotten, has made himself open to a permanent move back to Celtic. Celtic haven’t thus far commented, but N’Guemo said;

“I am not playing lately in the Bordeaux team, so to be honest, if there is an oppotunity to play week in week out , I will take that.”

Thats par for the course with the MSM. All our top guys leaving, and a dud who can’t get a game for Bordeaux coming in.

Aiden McGeady has been linked with Sunderland, to join up with his old manager, in probably the laziest piece of writing,  and Neil Lennon is still looking at Darren Randolph. Well, probably. Or probably not.

So, international weekend saw several Celts globehopping away from the pressure of the Premier League, so how did they get on?

The Harambee Stars, featuring Victor Wanyama , forced a draw with African Champions Nigeria, -big Vic declared it was a great result, and Miku played ten minutes for Venezuela and got booked as they lost 3-0 to Argentina, though CONCACAF group leaders Honduras drew 2-2 at home to Mexico, after being two down. Izzaguerre had been substituted before the comeback, but his side still have a great chance to make Brazil.

In Europe, Mikael Lustig was taken off at halftime during Swedens draw with Ireland, and Gergios Samaras was in the Greek side that crashed 3-1 in Bosnia. Charlie Mulgrew took the corner that lead to Scotlands goal against Wales, while Welsh midfielder Joe Ledley found out what its like to win at Hampden.

Israel had two Celts in the side which earned a 3-3 draw with Portugal, and defender Rami Gershon was the only one of ours to score a goal for his country this time round.

Peter Lawwell , after admitting that details of Celtic season card holders have been passed on to police, is losing a little respect among his “customers”

Sooner or later, he is going to have to go public and clarify what is going on exactly, and why. The rumblings of discontent will soon turn into a roar if he continues to ignore claims of collusion-well, maybe not ignore, but a wee bit more than a bland and condescending statement is required.

Incidentally, the Celtic Trust are appealing for witnesses to police behaviour on the sixteenth. In particular, “a blonde woman(pony tail, pink jumper black trousers ) standing beside a white car, who was videoing events on her phone, and a man with a small child, maybe three or four years old, who was threatened by police that he would have the child taken away by social services.

If this is you, or you know them, get in touch with the trust on celtictrust@hotmail.com.

And remember, incidents such as these are very rare, so don’t have nightmares.

A quiet weekend on the Celtic front gives a chance for Scotlands newest comedy duo to bleat about their own club, and predictably enough, they haven’t let us down.

Charles Green is back to claiming that his club, and Celtic will be playing in England soon, and all the usual shite he regurgitates from time to time. Nothing to do with the Sevco share price dropping below the original selling price for the first time, just a coincidence.

Ally McCoist was delighted that his side have managed to keep a second consecutive clean sheet, although they will have to wait for their title clinching moment yet a while.

Andy Cameron, who used to be a comedian himself, is a “celebrity ” Rangers fan-actually, their only celebrity fan-and he wrote this article in the match programme for Saturdays visit of Stirling Albion 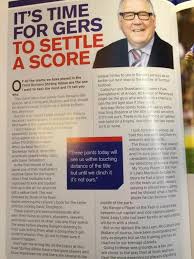 He blames all the other teams for kicking his beloved side, and proves that once again, the WATP mentality hasn’t gone away.

Meanwhile, in the land of high finance, Gavin Masterton, owner of Dunfermline, looks set to have his £12.2m loan written off, but to be fair, he wasn’t due to make a payment until he’s 101 anyway. I need to get that sort of loan, and those sort of repayments, so I had a look to see what bank offers such favourable terms, but it turned out to be the one he worked for, which has now gone pear shaped.

Mastertons Dunfermline side may well be wound up this week. Supporters have the money to pay the tax bill, we hear, but Masterton will not give up ownership, which has nothing to do with rumours that he will then have to repay a £34m loan as soon as he is not involved at East End Park.

Well, with all these stories flying round the interweb, it can’t be long until some hard nosed dedicated financial hack gets wind of it, and looks into Mastertons time at the Bank of Scotland, his company Stadia, which helped clubs to build their grounds, and any links with anyone called Murray.

Kenny Dalglish was rested by Willie Ormond as he was about to equal the record of most consecutive appearances, which prompted claims of SFA bias against Celtic. The more things change….

The day the hun died

has to be the aberdeen game 9-0

Where is Salmond et al and their calls for HMRC to ‘Take it easy’ with a football club owing tax money? Oh, right – special treatment and government intervention is only for one certain club, silly…