An A-Z of the Semi Final 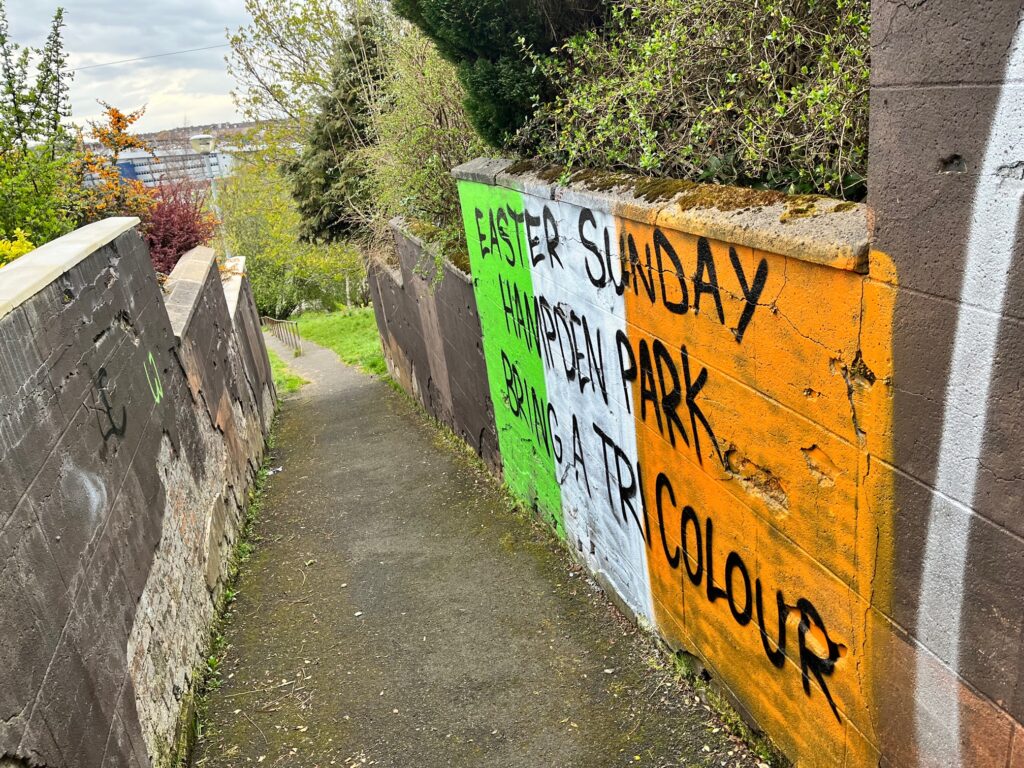 It was a piss poor performance by the Hoops ( and the Ref – Ed) where our side couldn’t find any space or really get into the game.

A is for Angeball, Attitude, Aptitude, Application and Abada. None were on show on Sunday

B is for Bobby Madden and Nir Bitton. One was sorely watched over the 120 minutes and the other sorely missed with 20 minutes to play.

C is for Callum MacGregor…needs his other midfielders to put a shift and a tackle in, cant do it all himself.

D is for Defensive Midfielders and Deflection, how many defensive midfielders do we stick on the bench with no intention of using and sad days when our only goal is a deflected set piece?

E is Effort and Energy, or lack of from far too many who looked half asleep and how the Hell did they look so much fitter than us the whole game?

F is for Flanks,Full Backs and Fuxake!..Rangers scores down both sides, we lost both our fullbacks and overall, well you know!

G is for Get intae Them and GG…bar Callum MacGregor and Maeda, we just didn’t and how badly we missed a focal point up front in our injured Greek striker being absent.

H is for Hatate, Headless chicken and How Long. The wee man tried his best but was ball watching and was due to be subbed a long time before he was.

I is for Industry, Invention and Impact. None of first two on show in Hoops today bar a few souls,  and our subs had no impact on the game whilst theirs saved and won them the game in the end.

J is for Just not Good Enough and Jota. Might not need the and there.

K is for Killing the game and Kyogo. We couldn’t kill it and Kyogo just couldn’t get into it.

L is Lessons learnt. There better be,  as you know they will play the same at Celtic Park and have a similar minded ref.

M is for Maeda and Movement…Daizen ran his socks off, chased every ball and should be the inspiration for all to follow. While Maeda moved, everyone else stood like statues the whole game, we need to move on and off the ball.

N is for Never in it. Even when we were leading, just never felt in control.

O is for O’Riley, must be ready for that start against Ross County, we need his speed of thought and passing.

P is for Playing out, Punting and Possession. We struggled badly to play out between Hart, CCV and Starfelt . Really badly. Then Punting to wee guys up front just seemed a case of easily giving up Possession.

Q is for Quickness. We were so slow, bar Maeda. We had a few chances for quick balls but always chose wrong or slow option. Quite shite.

R is for Resources.  Anges squad seemed  so strong and full of gems pre match but now its a race against time for County and we pray we see GG, Juranovic and Taylor fit for the trip to DIngwall.

S is for Spine and Start and Stop. The Spine of the team Maeda-McGregor-CCV-Starfelt and Hart actually did okay. I’m not gonna condemn that second goal as it was a final Starfelt touch or lambast a central defender for hitting the bar. There was no danger through the middle, it was all coming out wide as did the goals. The mantra is “We never Stop!”..well in this game sadly we never Started

T is for Tom Rogic. Big Tam clattered and like a good few of his colleagues was never really in it and got no protection from the Ref.

U is for Under Pressure. Make no mistake, that’s the narrative now. We need to get to County and claim the 3 points in any fashion we can.

V is for Vengeance. In 2 weeks time we need to be ready to find a game plan to combat their physicality and presence. Move that ball at speed and give and go. Lets see Angeball back please!

W is for Welsh..thrown on at right back with our second choice right back at left back. Bit harsh on folk lambasting the guy after a long absence and not even a full back.

X is for Xtra Time..should never have come to that. Ange needs to realise when a games there to be lost as well as won and get some shoring up done, we were wide open.

Z is for the Zulu movie where there’s a quote saying “Don’t fire till you see the whites of their eyes“..bar Taylors deflection and CCVs bar strike, did we actually shoot at McLaughlin at all?

Please feel free to add your thoughts in Comments section below

The Ref did make a big difference to the result ,but the Bhoys looked like scared wee lads.Wee Gio world class tactics big punt up the park done our Angeball ,shocking.Hope we learn and get
Heads up and chests out and get stuck in COYBIG

It was grim watching it. Forget Madden, he was atypical of the hunnic hordes who propped him up, he would have shat it if called out. It was a a day for studs up when needed. Ange’s A League teams here knew how to put the boot in. Hope George Square gets barricaded off if the hordes win. Thank Christ they are not coming to Sydney.

I’ve not been able to watch when we’re playing old firm fc since their world record 55 titles in 10 minutes so can’t comment on the game but on the bright side I’ll never see them score or win a game again in my lifetime.
E is for Eyes on the big prize.

A very good assessment of a very bad day for The Bhoys. Was complacency a factor? I think so. We, the support, expected to go and get a result and maybe the Team did too. Let’s hope we haven’t lost important players as we’ll need to play every remaining league game as if it were a CL final. However, 6 pts from next 2 games should see us over the line and at the start of the season that was all I wanted. The Title.
Hail! Hail! The Glasgow Celtic.
PS I think Daizen Maeda could play anywhere on the park, and usually does!

They played bullying tactics which madden was quite happy to allow, what I feel was missing from yesterday was McCarthy, who is never shy from a tackle and jostling for possession and then have McGregor further up..as they say in the world of darts, you need a double to win not a single..
Hail Hail Ange

P is for pish which was our tactics yesterday.
W is for WTF did we do in training all week.
He had 8 days to prepare for no GG up front. It should have been a case of 3 players up front all moving off each other but Abada looked like the lost boy of Ibrox at the start of the season, Jota liked he didnt give a fuck and that left Maeda looking very alone.

As for the tactics? If Bassey wants to man mark a midfielder from centre half drop deep ffs. and keep dropping deep. our own system chocked us.

If VAR would have ruled out their second don’t bring it in. The player was running the line and decisions like that will ruin the game. We looked a bit lost out there and I think their experiences in Europe helped them on this occasion. A treble would have flattered us and perhaps signalled to the board that the same again will suffice.

Not been here for a while. Hope you are all well and a very Happy Easter to you all. Sad news from Christiano Ronaldo and his wife tonight on the announcement they have lost their son, who has passed away. Always puts football results into perspective. RIP little one.
Sevco were allowed to run the game. Tom Rogic constantly harassed and pulled back any time we tried to counter. Fouls that went unpunished which would have resulted in yellow/red cards in any other league in Europe all day long.
We missed the chance to go 2-0 up that would have killed the game,so for all the moans and groans I’ve heard about no heart, no imagination etc etc this was the big moment in the game. If that’s all they have to offer bring it on. We recognise, we rebuild and we go again. Who would have thought at the start of the season we would be this close to a league title. Certainly not me. I was prepared to give Ange this season as a learning curve but he has been brilliant. Let’s now go and win the title. HH

We were woeful from start to finish. The ref shouldn’t come into it, if you play well enough he doesn’t matter. One bad game doesn’t make a season, we thought turning up was enough, hopefully lesson learnt.

Refs always come into it they are part and parcel of the game they influence it by the way they referee it.

Their goalie was a bag of nerves from the off even sclaffing the ball for a corner ffs, yet we didn’t take advantage of his nervousness and pepper their goal goal with shots, instead we gave him an easy day of it.
Maeda ran into position in their box but Jota chose to shoot from distance…Maeda was frustrated with him and gestured that to Jota. Jota had a bad day at the office I’m afraid.
In the days leading up to the game the media almost to a man said Celtic would have the fitness advantage due to having a full week to prepare while *rangers had had a midweek game that went to extra time. It was the exact opposite…they appeared sharper and faster and we seemed disjointed.
We’re going to need a bigger striker….hurry back Giaco..Geaka…big Jacky.

And for all that if Vickers makes it
2-0 game over.

What can be said, Maddhun? You knew his behaviour any wee sneaky advantage, yesterday was an opportunity but Celtic looked fearful.
They on the other hand bullied and harried, allowed on every occasion to get away with it. We are now in overdrive hate rascist mode, the deflectors call it sectarianism, or as a certain Billy Boys Corporation muppet called it a fantastic atmosphere, he probably would have been moved by Nuremberg .
The team and possibly the manager lost the plot yesterday, they did not realise the significance of this match to the hordes.
But you have to dust yourself down and get on with it,

It is one game in a season of improvement, as they say always look on the bright side of life

So, when push comes to shove, where is god?
In Ukraine, currently, where is god? Does the pretence continue to pretend?
A non-believer, me?
Far too bright to be otherwise.
A Tim is not (necessarily) religious, just a Tim.
A Tim Malloy. (A Wolfe Tone?)
I could extend this but, better to address the better informed.
Hail! Hail! OUR Club, OUR Celtic FC.
Lawwell lingers, like a fart in a phone box, but he’ll ‘pass away’…..I just hope someone helps him with that, fairly soon.
PS Bejasus, dem ‘farmer giles’ don’t half help your (one’s) attitude in the general direction of………”yooya……………”