Celtic Diary Wednesday March 16: Darkness When We’re Out Of Town

The relative ease with which Celtic disposed of Dundee United to keep alive the possibility of a fifth treble in six years was an indicator of how well things are going on the pitch.

The players showed enthusiasm, craft and a fair amount of hard work.

Interestingly, and probably uniquely, all the substitutes not only slipped into the style and tempo of the game, but each one of them did enough to catch the eye.

McCarthy made himself available for the pass whether needed or not, Rogic and Dembele were creative and determined, and Mikey Johnston looked like he was trying a little less and achieving a little more.

And he looked like he’d been at the weights, which in itself is a sign of the right attitude.

So all good then, as the hoops look forward to a clash with plucky cash strapped minnows “rangers ” in the semi final ?

The away support , some claim a minority , others a sizeable minority, seemed to run out of songs to sing, and brought back a couple of outdated and offensive tunes which were simply best left wherever it was they found them.

On The One Road, a song about Irish unification and including the line “Sure we’ve had our troubles now and then, but now is the time to make things up again ” , seems to have gained another line which is quite frankly unacceptable.

” Dublin, Belfast , Cork and Donegal ” has been replaced by “Soon there’ll be no protestants at all “, which is right up there with anything that the support of any other club or company has produced in the name of banter.

Now apart from the obvious misconception that players will run faster, tackle harder or pass more accurately because the fans are telling them that if they do the ultimate goal of the removal of protestants can possibly act as a spur, it’s pathetic to aim a diatribe at a section of society that has provided some of, if not perhaps the greatest of, all contributors to the history of the club.

The club has a fair degree of control over who gets away tickets, and I’m fairly sure they can identify if not the actual offenders, but the CSC or season book holder responsible for that area of the ground where the song came from.

At one time, self policing was a major influence in the Celtic support, and it appears that no longer applies.

So the club will have to police it themselves. They will have to identify the offenders, or those who accepted the tickets and perhaps distributed them amongst their members or friends, and remove them from the list.

There are no excuses for this behaviour, and the punishment must be swift and severe.

And as for that awful ditty about roaming in the gloaming with a shamrock, that has to go purely on the grounds that it’s pathetic.

” Ma…ma…Dad’s disappeared, and I can’t find his shamrock ”

Think about this…if our support is singing about what is presumably a protestant genocide, then how on earth can we criticise and demand action when another support sings this….as they did the other evening ?

Please don’t hide behind the ‘other versions’ that were put up to enable this line of defence. https://t.co/0PcKJxcyGA pic.twitter.com/uavPmMifEQ

We’re not two cheeks of the same arse, and we’d do well to remember some wise words.. 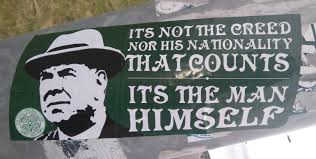 The other feature of the other night was the performance of John Beaton, the referee .

He managed to disallow a perfectly legitimate goal when Daezen Maeda scored after an accidental handball from Georgios Giakoumakis, and neither he nor the multitude of experts seemed to be aware that a rule change this season means that goals scored under those circumstances are perfectly legal.

No one has questioned why a top level official was unaware of that change, and no one has wondered if any of the referess are aware of it.

We did hear that they have been introduced to one change, where a solid bar replaces the piece of string between the posts,. and that some of them are still struggling to adapt to the pace of change, but someone , somewhere is responsible for an official not knowing the rules.

Come to think of it, his refusal to award a penalty when Karamoke Dembele was bundled off the ball probably shows an overall lack of knowledge of the rules, although it does seem to be an intermittent problem, as their memory comes back rather sharply when  one club/company makes a claim….

They certainly concern me.

The real darkness however lies in what is ahead.

Regular readers will know I have a deep seated mistrust of our board and it’s intentions, especially towards the business partnership they have with a struggling new club and it’s lack of financial nous.

Their lack of control of stories, and their apparent lack of concern about these stories, that appear in the media, always bad news, always aimed at causing disruption or discontent, is not reflected in their treatment of fan media.

Natasha Meikle
@natashameikle
Was a pleasure to listen to Ange speak tonight about football, family, his season and his future ambitions. Left in no doubt that he 100% gets this football club, and his ambitions are totally aligned with those of the fans. A really special guy we have in charge.

Yet there are no recordings and no video of this.

What was the event, why no recordings or video, and who chose those who attended? What criteria was applied in selection?

Answer there came none, although it was clarified the club requested ( lol..requested ) that no recordings were made.

Now why would they do that ?

Too private to record, but feel free to discuss it publicly, which sort of defeats the purpose of not recording it.

Having been asked to dance once or twice by a former CEO in return for a few snippets of news, I’m fully aware of how this works, and since the support trust fan media, quite rightly, over the mainstream, then for our own largely inefficient PR machine this particular outlet for news and information is open to manipulation, and given that this particular board has shown no respect for fans wishes, then it becomes clear that some are being used, and one can only wonder what for.

After all, we still haven;t had the Janefield crush report, we still haven’t had closure on their behaviour during the collapse of the original Rangers, and we are told that all such matters are dealt with behind closed doors…

Now wouldn;t it be much easier for them if a few trusted fan media outlets would do their work for them on the promise of a few trinkets of information.

When I was asked, I said there was no need, I just make stuff up.

Which in reality is pretty much what the board do when you try to get them to discuss anything…. are they now passing on even that small concession to their supporters and shareholders ?

If so, what train is thundering down the tracks towards us, ready to cause carnage ?

Yeah, maybe, but thats what they always say we are, and history has shown us we weren’ t paranoid enough.

Sack the board and back the team.

Regarding the game at Tannadice. Firstly, it’s probably the poorest Dundee Utd display I’ve seen for a while. I thought we never really got out of second gear, but we scored 3 (albeit softish) goals. While I accept the pitch didn’t help, our final ball was consistently poor……….it’s just something that really annoys me. With a bit more composure in the final third we could finish games off earlier and avoid potential slip ups. We have 8 ‘cup finals’ to win in the league now, we need to be ruthless.

The return of these songs is pathetic and drags our club down to the sewer. Anyone singing along is personally responsible. Our Club needs to issue a clear statement that any repetition will result in bans. I’d extend this to the use of flares too but bigotry is the main issue here. For that is what it is. This is evil, shameful and damaging behaviour and we all need to do all we can to stamp it out.

Anti – Protestant songs, sentiments or comments should have no place at Celtic Park.
We as a support are way better than that, way better.
Let’s drop that particular ditty & sing our songs & get behind our team!

Since 90% of children who go to Catholic schools now have at least one non-catholic parent, it is almost certain that 90% of these morons are singing songs hating one of their own parents.

Time these useless, cowardly ratbags were hoofed out the park by other supporters and booted up the 4rse on the way out.

A fact that is never mentioned in the media in this country is that there are around
at least 10% of protestants (6,000) at Celtic Park on a game day. Its about time
that these: repeat, useless, cowardly ratbags were giving them some respect and offer them a welcome.

This uneducated behaviour is an insult to the likes of Jock Stein, Danny McGrain,
Larsson, Kenny Dalglish, at least 3 Lisbon Lions, Johnnie Thomson, God rest him,
Willie Fernie, the present teams players and my own favourite, the late, great Bobby Evans, a wonderful, wonderful player and many more.

I would love to be beside this mob of (see above) with a baseball bat in my hand
when they start their chanting with their wee squeaky voices.

I could cry when I think of all the fine, protestant workmates I had during many years on the building sites and non-catholic neighbours and who have gone to their eternal rest.

Get these morons and boot them under a bus.

Indeed Weered, hope you & the family are well!

“After all, we still haven’t had the Janefield crush report”

Yes we have, a damp squib, but published nonetheless.

3
The Cha
Reply to  The Cha

The meeting on Tuesday night was for Club Celtic members. There have been simmilar meetings with Ronnie Deila, Neil Lennon, Brendan Rogers and Scott Brown over the last few years.

1
The Cha
Reply to  LimeGreen Bhoy

What is Club Celtic?

1
LimeGreen Bhoy
Reply to  The Cha

0
The Cha
Reply to  LimeGreen Bhoy

Fan Media attend press conferences and have interviews with the manager and players.

They tend to ask articulate and intelligent questions, in contrast with the ignorance and arrogance of mainstream media.

Despite this access, they don’t hold back critiquing the board when necessary.

They don’t have cosy tete-a-tete with Nicolson, Bankier et al over tea and crumpets.

I get the MSM hate this as it shows them up time after time but I can’t see how getting answers to questions fans want is a bad thing.

Well said. If there was a fight arranged over transubstantiation or the intercession of the saints I’d be impressed but this is an embarrassment to the club. Kids need an outlet for their frustrations, fair enough, but there seems to be an FU attitude with the pyros that they know will end up with a fine. When you get fined for a Palestinian flag what authority is there to respect but the Protestant drivel is desperate.

We are one in this Ralph. How do we influence our version of sectarian bigots. Must be a new thing Celtic have always held the high moral ground on this one.