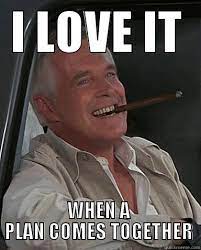 That was, as weekends go, a fairly decent one.

An Alan McGregor inspired Ross County took a point off “rangers “, leaving it late so that referee Andrew Dallas could do little about it…even he would have balked at adding on a couple of days injury time… leaving the way clear for Celtic to dispose of Dundee United later on Saturday, which in turn would leave Celtic in a position to beat the new club and resume their rightful place at the head of the pack.

On our recent podcast, I said I expected a narrow win, but I think we all agree that we’d have rather it had been less narrow.

Liel Abada scored yet another vital goal with only seconds on the clock which sent the stadium into raptures…and a couple of the players, securing a hard fought 1-0 win.

Jota seemed to enjoy it…..

There are even unconfirmed rumours that manager Postecoglou smiled before going out to talk to the press.

Another single goal victory, which has happened about a dozen times recently, may prompt some to think that Celtic are still a little bit short when it comes to scoring goals, and granted there might be something in that.

But that’s twelve wins where previous Celtic sides would probably have drawn, and it shows that everyone in the squad is determined to fight to the finish to get a result.

You can tell the fans enjoyed it, and here at the Lennon CSC some of the members are still making their way home after the match.

On Wednesday , Celtic face “rangers ” , and a win would mean Celtic are back at the top of the table, with fifteen games to go,

If the top six, for instance, remains as it is, when the split takes place, there is something else to consider…. the way the fixtures have panned out, to make it fair, two home and two away against everyone, Celtic will have five home games, and “rangers ” five away.

I think we know how that will work out….they need the money.

They probably need a big distraction as well….. their support has been making a name for itself again…. or as the BBC put it, they’ve been in fine voice….

Were they shouting “play up , Rangers “, or even “Get intae them ?”

Of course they fucking weren’t.

And after the match….

Regan Charles-Cook
@R_charlescook
I am extremely hurt and frustrated to come off the pitch today and be left multiple messages of racist abuse. This makes us stronger and we will continue to fight against racism!

Ross County FC
@RossCounty
We are disappointed that our player Regan Charles-Cook has been subjected to racist abuse online following today’s match. We will give Regan all of our support and will work with the Police & relevant parties to ensure these messages are properly dealt with.

Meanwhile, the tumbleweed continues to blow past the door of the offices of Everyone, Anyone, the PR shell operation set up to show that they are really a nice bunch of guys who do not judge a man by his creed, colour or religion. Unless, of course, he’s Irish, black or heaven forbid, a catholic.

Today is the last day of the transfer window. Whereas Celtic, as the manager had promised, have strengthened, there is little or no movement at Ibrox.

Oh, they may have to ask Colombia if they can please have “chubs ” Morelos back for the Glasgow derby…. especially as they probably won’t be using him…

We hear this note was handed to the Colombian FA….

Please can Alfredo have the day off as he’s not very well.

Consider this not unlikely scenario.

Another , alright maybe not another… a key player, maybe Goldson or Barasic, possibly Aribo or Kent , leaves Ibrox today..and they don;t replace him.

Their support, usually so tolerant and understanding will perhaps register a little bit of disappointment…..

The world really was a better place without them.

Now, something else caught my eye over the weekend….

Someone has bought a significant amount of Celtic shares.

That also means someone has sold a significant amount of shares, which is arguaby more interesting.

By popular demand, alright, one tweet, we have the return of an old favourite, the caption competition, and since he ( pete R Lacey…thanks for the suggestion ) suggested it, it’s his picture…. Isn’t it nice not to panic on transfer deadline day….especially when you have the squad and manager already in place which probably won;t make an arse of any UCL qualifiers we have to play.

Meanwhile, in a dark place over the river….

Caption – In the syle of a great Barry Norman film review- In the Hollywood remake of the classic Kieran and Partrick love story players Matt O’Riley and Jota certainly have great on field chemistry and I for one look forward to seeing how this relationship develops over the season(s). 10 out of 10.

Caption: I mean Colombia haven’t scored in 6 games, SIX!!! And still that fat feck can’t get a game.

Thought Starfelt had a decent game on Saturday but he’ll always wear that tag of “he’s a bit of a bombscare”. Ladies and Gentlemen compare and contrast with Calvin “Shirley” Bassey. Quite possibly the worst defender in the SPFL. Yet he’s very rarely mentioned in the same way that Starfelt is even after another horrendous mistake on Saturday. I think hotbaws McGregor might have taken the spotlight off him.

I dunno maybe the media are trying to protect him whilst sevco are forced to play him. I just hope to God Goldson and Shirley are still the partnership for them on Wednesday.

What I wouldn’t give to see Kyogo running straight through them on Wednesday.

So Benfica asked me to come home and I said nae chance, I’m living the life O’Riley at The Hoops.

Not sure if I’m barred from entering this caption competition but….

Caption: so when you signing that contract?

Caption ..
The green brigade have got a choice of the who ,the lightning seeds and loads of other songs with Riley in the lyrics , they better pick a good one or they’re getting their jotas…….

Caption: I mean Colombia haven’t scored in six games. SIX!! And that fat feck still can’t get a game.

Caption
Do you even know how to lead a choir mate?

Nail biting at the weekend, a duff referee and time wasting became a new art, but ABADA class came through.
The goal that they lost could not have come at a better time, wee Dallas looked as unhappy as Boydo.

Caption: The ‘H’ sound is a tough one to master, try this exercise wee man “have you seen a handsome h….”

I noticed a nice wee piece of irony as I read the Diary.
Now RC is a red flag to that shower across the Clyde and in the LRA and SFA et cetera. So how delectable that they dropped points to RC on Saturday and another RC scored. Well RC-C for the pedants but you get the drift.
Of course I’m not religious, but I hate the huns, original and facsimile and love irony and when karma bites that scum.
Only the ref can stop us on Weds. night, and we all know Madden will if he gets the chance.
HH and COYBIG

Can someone explain how the basket of assets can afford all these loan deals? They are trading insolvent as far as I can see

Caption “ so do we always win?”
Feeling positive but I don’t expect Wednesday to be a walk in the park.
That said spirits are up Ange is doing well, his recruitment has been excellent. But we need to finish teams off, Wednesday would be a good start.

You really think I could be your Andrew Ridgeley

Any more news, conjecture or even wild speculation on that share buying/selling?