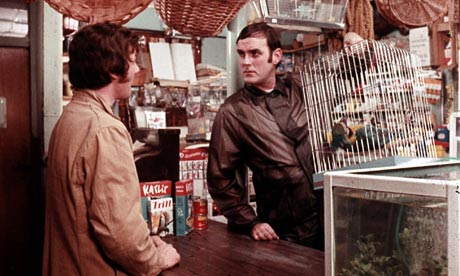 Customer: ‘Ello Ello, I wish to register a complaint.

(The owner does not respond.)

Owner: What do you mean “miss”?

C: Never mind that, my lad. I wish to complain about this club what I purchased not half an hour ago from this very boutique.

O: Oh yes, the, uh, the Scottish Blue…What’s, uh…What’s wrong with it?

C: Look, matey, I know a dead club when I see one, and I’m looking at one right now.

C: The history don’t enter into it. It’s stone dead.

(shouting at the cage)

‘Ello Ello, Mister Rangers! I’ve got a lovely fresh tax dodge for you if you show…(owner hits the cage)

C: No, it didn’t, that was you hitting the cage!

O: I never, never did anything…

(Takes registration paper out of the cage and thumps it on the counter. Throws it up in the air and watches it plummet to the floor.)

C: Now that’s what I call a dead club.

O: Yeah! You stunned it, just as it was wakin’ up! Scottish Blues stun easily, major.

C: Um…now look…now look, mate, I’ve definitely ‘ad enough of this. That club is definitely deceased, and when I purchased it not ‘alf an hour ago, you assured me that its total lack of movement was due to it bein’ tired and shagged out following a prolonged EBT.

O: Well, o’course it was nailed there! If I hadn’t nailed that club down, it would have nuzzled up to those bars, bent ’em apart and VOOM! Feeweeweewee!

‘IT’S a stiff! Bereft of life, it rests in peace! If you hadn’t nailed ‘it to the perch ‘it’d be pushing up the daisies! ‘Its metabolic processes are now ‘istory! ‘IT’S off the twig!
‘IT’s kicked the bucket, ‘it’s shuffled off ‘is mortal coil, run down the curtain and joined the bleedin’ choir invisible!!

(He takes a quick peek behind the counter)

O: Sorry squire, I’ve had a look ’round the back of the shop, and uh, we’re right out of clubs.

C: (sweet as sugar) Pray, does it play football?

O: Look, if you go to my mate’s shop across the Hampden corridor, he’ll replace the club for you.

The customer enters the same club shop. The owner is putting on a false moustache.

C: That’s the bloody SFA for you.

Excellent fresh slant on the Sevconians!

It’s amazing what beggers can do in their spare time. Create entire fantasy sketches based on nothing but their own shitey metaphors. Remember this, GLASGOW RANGERS IS A DEBT FREE CLUB.

Only problem here is, the customer, (Green) killed,(liquidated) the ex-club.

WELL IF WE AREN’T RANGERS ANYMORE. Why do CELTIC fans still hate us.

nobody hates you. Indifferent maybe. Good to have you on here, hell, you may even learn something.

I’ll tell u why, RANGERS IS A DEBT FREE CLUB. YAAASS

Does anyone else feel a wee bit sorry for poor scooter? His pain is almost tangible! Ah bollox who am I kiddin’ it’s funny as hell 😀

Don’t need to feel sorry for me pal. I’m no an immigrant

Chill out scoot, learn to relax & resist your odious Klan ways for the last day of the year. Btw, can badly type for laughing.

Oops typo. Meant to be “hardly” type for laughing. See what I mean, you really are funny:-D

To be totally honest with u mate , nothin makes me more sick than people like u. I enjoy comin on blogs to tell all you monkeys what I actually think

We are the people

Then, now , and forever

You are not my friend or my mate. I was also referring to u as a monkey

Hey Ralph, this guys quality. He’s got me in stitches. Although I think your “hell, you may even learn something” to him, is pushing the boat out, and a forlorn hope I’m afraid!

Aye, he’s great. and a lot cheaper than booking a professional comedian.

Forlorn. The person who made this article is forlorn. Hence why I just couldn’t help myself on this 1 particularly. Its unreal somebody has went to the effort to make this garbage. Happy new year