It’s difficult to believe most of the nonsense that appears in the newspapers, and as a certain, sharply dressed chief executive once told me, websites, such as this one, are driven by the need for clicks to attract advertising , and can be even more irresponsible than the mainstream.

Of course, he was wrong about that, we don’t carry adverts, and have so far resisted attempts to mention certain products in the text.

Not for any high browed moral reasons, but simply because they’re not offering enough money or free samples.

And none of them sell beer, fags or luxury sports cars.

So, even if you think our pish stained sources are wrong, or the voices we hear from the ranch are wrong, we assure you that they don’t think they are wrong, and so any stories you pick up from here come with the assurance that whoever told us has been checked out and is telling us with the best of intentions.

Though that water story from the church near Ibrox did test that particular theory.

For instance, today there is a story that David Marshall has been offered a contract by another English side, and Celtic need to be quick to get him. Coupled with the revelation that he is keen on a move to Glasgow, the implication is it would be folly to miss out on the opportunity.

It’s probably true he would jump at a chance to come to Celtic. It might be true another club has offered him a deal. It’s almost certainly true that his agent planted the story.

Celtic only have Scott Bain at the moment, so one or even two keepers are a necessity.

The management know that, but so does everyone else.

Given previous forays into the transfer market, if moves for Fraser Forster come to nothing, you can almost guarantee that whoever does come in will not be on the radar of any journalist.

Meanwhile , Leeds United will make Oddsone Edoaurd their number one target should they get promoted to the EPL, according to the Daily Mail.

The news is not thought to have kept the Frenchman awake with excitement.

We’ll see more and more of this nonsense over the next few weeks, when really all Celtic need are a couple of keepers and a centre back or two.

Everything else is pretty much on place to secure the tenth title, and maybe even , if we are to aim higher, the four trophies that are up for grabs over the next ten months or so.

Europe will be a lottery, as the first three ties are on a one off basis and there is a danger Celtic could get a home tie, which would be catastrophic. We’re a much better team away from Glasgow these days, and we’d be better off without the added pressure.

Going back to our media, we mentioned yesterday that there is an agenda to encourage “rangers ” and their support in their quest for 55 titles in just under a decade, and that , for the moment, is taking precedence over bad news Celtic stories.

Next month, Stephen O’Donnell’s new book, Murray v McCann hits the shops, and part of it deals with the way the media, in the absence of the internet, demonised the Canadian businessman and ultimately turned the Celtic support against him, with the pinnacle of their campaign reached as Celtic unfurled the league flag after stopping Rangers from winning their tenth title in a row.

(Full review of the book next week )

Which, in turn , provokes the thought…have they done the same re Lawwell ?

Lawwell’s fiscal policies and iron control of the way the club is run mirror the prudence of McCann, and it took years for the support to realise the part played by McCann, not only in rebuilding the fabric of the club, but the ultimate resurgence on the field that led to the second nine on a row last season.

Will Lawwell ultimately be remembered as fondly as McCann, with the benefit if hindsight ?

Frankly, no. Resolution 12 inaction has put paid to that, but it will be interesting to hear him one day finally be honest about his reasons.

Elsewhere, and rumours that Mike Ashley still had a hand in the marketing and distribution of the new Castore kits for “rangers ” seemed to be confirmed as true last night, as it appears that Castore have withdrawn the kits from their website.

The Ashley owned House Of Fraser stores are selling them…

whereas on the Castore site, if you search for replica rangers kits, you get this… 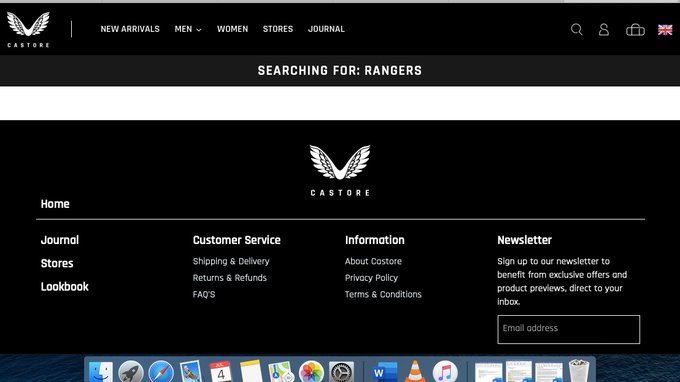 Once again, the gullibillies have been stitched, and it’s probably far better stitching than will be evident in their kits.

Which makes a nonsense of this claim, from a couple of years ago, which was debunked by Phil MacGhiollabhan…

Looks like that ash cloud is back, and it’s going to choke the life out of them even further.

The support took it badly, as you’d expect.. 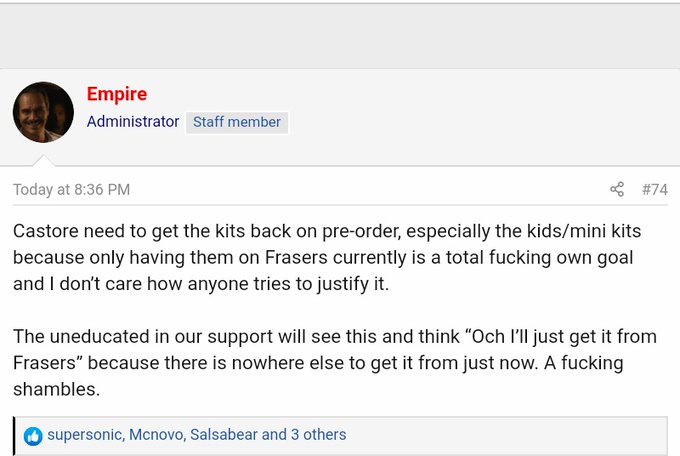 Thing is, they can’t do anything about it, other than boycott the kits, which they won’t, as it means they’ll have to wash the old ones…

All the more reason for the succulent spam….they can’t stretch to a nice leg of lamb any more… on offer to servile hacks, and today it’s the turn of Gavin Berry at the Sunday Mail to induce the type of nausea that used to prevail from an over indulgence of the sweet meat….

Steve Cotterill coached the Rangers captain during a loan spell and has been impressed with his development.

I’m not quite sure what that bond is, but it’s not one thats going to attract major investment.

With the media, it’s important to remember what they don;t say is often more important than what they do, becuase when you miss bits out, you get a whole different story….. 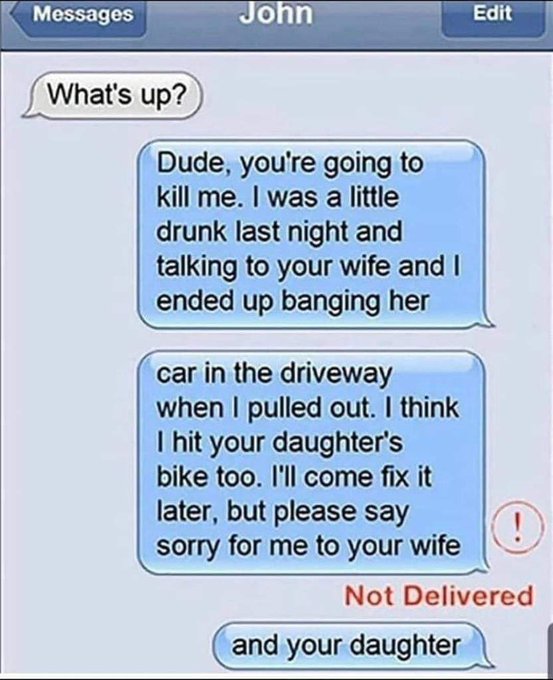 Just lately, there is a lot missing from the story at Ibrox….

Well spotted, there, as this actually was taken last week during the school run.

A gullibilly being skinned again hh

Caption – stevieG sends taxi round to make sure Morelos makes it to the 1st day of pre season training.

Caption: Gullibillies sold yet another pig in a poke.

Rangers season ticket holder needs some persuasion to return to Ibrox for the ten in a row season.

Your mis-spelling of the Celtic centre forward’s given name AND surname is a disgrace; as is your attempt to name-check a Donegal-based journalist.

Damien, your observational skills (on mostly typos) are reasonable but you attack a guy who freely gives up his time to bring us news and laughs in abundance. What is it you have to OFFER here? I reckon you should change your 1st name to Ian and then you can prove you have an IQ, albeit a very low one. You’ve maybe just jumped in the ‘deep end’ without thinking and I hope that’s the case. Bear in mind (double entendre?) that an apology would go a long way towards showing you just slipped up, like Ralph’s typos/mis-spellings. We don’t claim anything much on here and we DO fall out at times but we’re pretty much all genuine Tims who like to fukk about a bit. Our creator of the Diary is a cracking guy who travels thousands of miles per annum to watch Celtic.
So, in the current climate, please remember, Ralph Malph Matters. 🙂
FC not PLC
HH
Hello, 10 in a row, 10 in a row, Hello!

Caption- “Premium sportswear company, Castore, are making inroads into the high-end ladies fashion market. It is believed they have an aye ready Hunnette client base eager to snap up their first venture; a classic line in Silk Purses.

These will, of course, be manufactured from the finest materials and to the same exacting standards as their award winning* ‘New Cutting-Edge Technology’ Sevco strips.”

Ally McCoist’s favourite kind of bacon roll gets a lift from a taxi company I’ve honestly never heard of.

Captiona
The Beahon brothers get ready to take over the Sevco food
franchise.

Another Porky to the slaughter, after he loses his Castore Oil top,

Confused? Bemused?  Befuddled? Bewildered? Then you must have been reading the mystical musings of Portpower. Some of us have been clueless for almost a decade but a self-help group is now in place.
Contact
The Portpower Appreciation Society,
WTF? Towers,
Stoner-ville
Oz:-)

Bit of a stooshie this week , with wee Nicola seemingly threatening to enforce a border to stop the English possibly bringing the virus to Scotland.
Revealed by Jane Freeman today. Nobody arriving in Scotland since the virus started has been quarantined. Not one person. Seems the staff didnt have security clearance to check the Home Office data.
Joke of a party. Joke of a health secretary.
Not one person has been checked or quarantined after arriving in Scotland.
Like Ralph said always look to what they are not saying , rather that paying attention to the pish they are saying..
Leaving us wide open to infection from all across the world. Totally indefensible.

Why don’t you get off your knees?

That whole article becomes totally invalid after todays revelations. It would now have to be titled ‘ Scotland could eliminate the coronavirus – if it weren’t for England and every person that can fly in unchecked to a scottish airport’
Hasn’t got quite the same ring to it. But that is the fact of the situation.
You happy about that Puggy.
4 months of air passengers going totally unchecked.
Suggests a level of incompetance somewhere.
But it is no problem , just blame someone else.

Scotland could eliminate the coronavirus – if it weren’t for England , and everyone else from all over the world who flies into a Scottish airport unchecked and not quarantined.

Caption: Goodness Murdo will you go easy wi’ yon rohypnol, I was after a wee dance first.

In the trailer porky. those british tories might want to leave Europe , but they dont mind sticking their cock into a dead romanian pigs mouth.

Watching Southampton v City, is it only me who feels like the remaining 8 SPFL games could & should have been played?
Even with no fans, it’s still Celtic, it’s still fitba!

P.S. Ralph/Desi,
I like the new format of the site…..i take it Ralph had no input?

As for the could and should take place , maybe
But i have watched a few of the EPL games , and i thought they have all been pish. The fake crowd noise , the whole training game feel and of course no fans for atmosphere, not a great spectacle.

FFS Monti, huv a heart!
They called time on it to save the new huns embarrassment and to give the ragers something to faux rage about due to mathematical possibility, and NOTHING else.
We’d have ended up 20-odd-point winners and they’d (the polis or whoever) have had tae shut the Erskine and Kingston bridges to stop the NHS being over-run by hauf drowned and dying rats. Huv a heart big mhan! 🙂
FC not PLC
HH

british army bring one of their pigs home!

Caption: hun on left can’t decide if he wants to fukk the pig or kiss it first and gets all muxed ip. Pal on right tells him “it’s okay mate, Bojo and Donald have been doing it for a lifetime and look how they’ve ended up!”