Wednesday evening marks the return of the Champions League and sees our favourites travel to Munchen in Bayern © Alan McInally to see Celtic face Bayern in Round 3.

Celtic will be buoyed after a recent 3-0 success at Anderlecht when the Bhoys, after a nervy start, turned in one of their finest away performances in Europe in a very long time. Bayern on the other hand wasted no time in making changes following their 3-0 defeat in Paris, by reinstating legendary boss Jupp Heynckes back into the ‘FC Hollywood’ hotseat. Heynckes was the coach who won the treble of Champions League, Bundesliga and German Cup before being replaced by Pep Guardiola!

Der FCB is one of the world’s great football clubs. An illustrious history and yet from a success perspective this only really started in the 1960s. Bayern weren’t part of the original Bundesliga but a foundation built on three legends of the game, goalkeeper Sepp Maier, arguably the greatest defender ever in Franz Beckenbauer and Bavaria’s own Joe Harper (Gerd Müller…what a striker Müller was!), they won promotion to the Bundesliga and soon won the German Cup in their first season in the top flight. This gave them access to the Cup Winners Cup and Bayern went on to defeat Rangers (1872-2012) in 1967….the same year Celtic became the first non-Latin team to be crowned Champions of Europe. #BayernCeltic1967Family!

Bayern’s history since then speaks for itself and they are up there easily as one of the top five clubs in European football.

So what about the current Bayern team?

There’s no disputing their early season form has been disappointing compared to their normal high standards. The loss through retirement of two great players and great leaders in the shape of Philip Lahm and Xabi Alonso should not be understated. Lahm was world class and brought a calm reassurance to the team in defence or midfield. Likewise, Alonso sat just ahead of the two centre backs allowing others to advance forward while he calmly protected the defence and moved the ball effortlessly to his team-mates. Matters weren’t helped when early in the season, arguably the world’s finest keeper Manuel Neuer, broke his left foot and is unavailable for several months.

That’s the downside for Bayern. The upside is Heynckes is a wily old fox who I expect to get Bayern back to their absolute best in very quick time…I’m just hoping not too quick!

Hummels and Boateng are two top class centre backs. Excellent in possession and very strong. They are supported by excellent ‘full backs’ in the shape of Bernat and Kimmich who have licence to drive forward to support the midfield and attack. A weakness that can be exploited is sometimes both central defenders are left isolated but to take advantage of this Celtic will need possession of the ball and show bravery by attacking in numbers. Do this and lose possession quickly…we will be punished. Who’d be a coach?!

The loss through injury of the excellent Thiago and Ribéry would normally upset the balance of any team. It may well do but when you can call on the top class talents of Vidal, Robben, Coman, James (Rodriguez), Rudy, Müller and Lewandowski it certainly softens the blow! 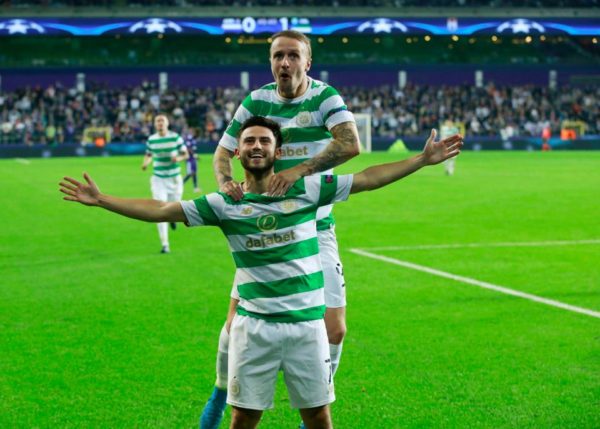 The return following injury of Scott Brown, Stuart Armstrong and Jozo Simunovic is a big positive as all three are vital to Celtic. Jozo and Boyata were rock solid in Brussels and easily our best central defensive partnership. Armstrong brings energy and intelligence to our team. It’s his willingness to continually run into space when not in possession that perhaps goes unnoticed and is vital to creating space for our attacking players to take advantage of. Of all three though there is no doubt that Scott Brown is the most vital player. Broony is playing the best football of his career. He’s added excellent control and passing to his aggressive attributes making him (for us) our most important player. Add in clear leadership qualities and we are a far weaker team without him.

I see us definitely starting 10 of the 11 players who began the match in Belgium. The one position up for grabs is possibly the top of the midfield three. Rogic, Armstrong and McGregor are all vying for this role and it really depends on how Brendan Rodgers wants to set up his team. Rogic is the most offensive. Going forward he gives us more options but defensively he’s the weakest. Armstrong has just returned from injury and his game as mentioned above involves lots of running and lots of energy. Is he ready to start? McGregor is more natural to sit slightly deeper giving a tighter midfield three. His quick rotation of the ball is excellent when we are in possession but how much of the ball are we likely to have compared to normal? It’s likely two of the three will share 90 minutes.

How will the game go?

The reality is Bayern are packed with world class players and if they play well they will win, probably convincingly. A bit like Celtic facing opponents in the Scottish Premiership. Celtic’s best chance of getting anything is if Bayern aren’t on their top game and Celtic play at their absolute best. As early season has shown it can happen. Celtic will need Gordon and our defence to play even better than they did away to Anderlecht and when in possession our players to be brave, creative and decisive.

Bayern should and probably will win with a bit to spare but as football supporters you always go in with hope in your heart. My one wish is Celtic put on a performance in a great arena against a great team to be proud of….get every jammy break possible….and win!

What is a bhoy to-do, worry and fret about..what could happen, get pished and…blot oot the thoughts that surround you or..have hope in your heart, I prefer the latter. we are init, we dream to winit, that might be..beyond dreams, but life should be full of dreams cos life wid be….without them. So best not to dwell on the big names of Hooray for Hollywood and think that life is great because we are in the C.L. have a great manager and have better players than we’ve had for a while and are sooooooo looking forward to this game. Besides its just after the Octoberfest and they might still be to pished to compete.
Great read H.H. (Hannibal Hector).

Good diary Ralph, I am sure Bayern will do well . I just want us to be competitive and push them a bit, still delighted with what we did at Anderlecht and two home games to come.
I am actually more worried about Saturday coming a bit soon after Wed. night.
Love Mike’s upbeat attitude ata bhoy, lets go for it.

Fair appraisal of what might be hector. Football now is producing blow out scores Basel took six off benfica I think. SO if we are on the end of a thrashing, well, we move on. Lower expectations and enjoy. You never know

Do us proud, that’s all we ask.

Good assessment of what might be, but we are there . Let’s just compete and see where it takes us. As Mike says …with hope in your heart,a song on your lips and a beer in your hand .
Up the hoops

Would a wee bung to the ref and his team be any good. Signed All at Juventus…..

We are the Slopeytineys, little girls and boys
Make your requests, we’ll not refuse you
We are here just to amuse you
Would you like a song or story?
Will you share our joys?
At games and sports we’re more than keen
No merrier children could be seen
Because we all drink Slopeytine
We’re happy girls and boys.

I’ll be in Munchen tomorrow from 1100. This is not my first rodeo in those parts if anyone wants to meet up for a beer let me know!

Feel sorry for Griff totally isolated, bring on Ayer take Gamboa off, they need someone upfront that the ball can stick. McLean how he hates Celtic, nearly greeting when there goal was given offside

PL should know this and therefore has investment decisions to make. To date he has settled for domestic success. Is that enough??