The Boy with the Oil Can 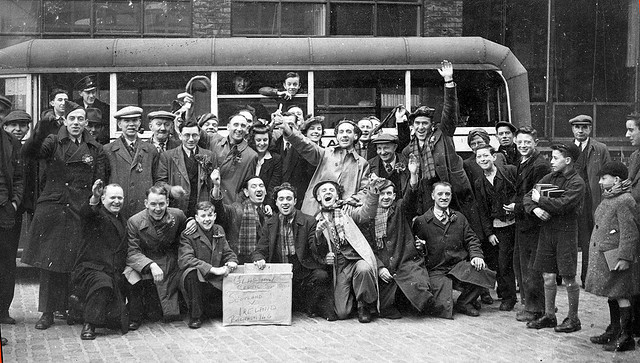 It was the smell of oil that always got him. That heavy pungent smell that made your airways instantly react. It reminded him of those dastardly chloroform filled handkerchiefs over the mouth he used to see in the movies. He always forgot how sentimental he could be, that side of him had long died away, or so everyone thought. It could easily rise to the surface though, despite his ability to suppress showing any outward signs, he would often find himself thinking back to former days in former places far far away. In truth it had been happening more and more lately,but of course he would admit that fact to no-one.

It was the smell of oil that always got him. It reminded him of the long trips on cold dark nights and days, far away, a distance away, a lifetime away. He could still smell and hear that old tired engine pounding hard and the constant complaints from the old tired driver as he stared on into the black void. Poor old Tam, a man always facing forward but never looking forward.

He also remembered the cold. It was always so cold. The oil smell might have been constant and clawing but there was never any heat being generated. “That’s why God invented hats and coats Son” Tam would reply whenever anyone complained about yet another broken heater and so many miles ahead.

He remembered all those loud big voices from all those loud big men. Deep bass abuse booming out from journeys start to journeys end. They were angry voices too, angry voices from angry men. Voices that made many of the children present, catch a breath and pause fearing all hell was going to break loose. Then from elsewhere, a lighter voice would shout something cutting and sarcastic and after a slight and terrifying pause, a loud roar of laughter would break out and confused children would go back to muttering newly heard swear words under their breath hoping to remember them for the Playground on the coming Monday.

He remembered the faces. The kids faces looking up and smiling in anticipation. They were always so eager to arrive and always desperate never to return back. He remembered the mens faces too. Some new arrivals had smiles and a warm glow, most did not. No childish enthusiasm there, just tired, weary faces and all weighted down with battle fatigue and disappointment. He remembered the smell of cheap alcohol combating with the pungent oil. Air conditioning was the stuff of science fiction.

He remembered The Songs. It was no Welsh Male Choir but how he remembered the songs. He remembered watching the kids mouthing the words a little behind the adults, slowly picking up the lyrics and bedding in the verses for years to come.

He remembered the smiles. The wide, often toothless smiles as the stars aligned and shone down to make everything come good. He remembered the tears, grown men, men who could fight Goliath according to the kids wide-eyed mythologizing, left broken and silent. Men with hard faces heavily stained from warm wet tears after the Gods of fate has swiped them hard across the cheek and said “No, not today, Today is not for you”.

He remembered the day it ended.

He always knew it was coming. It still hurt though. Anticipation and expectation can only prepare a person for the action, it can never prepare them for the feeling and emotional impact. It had hurt. He may have even let it show, he couldn’t recall now. It shocked even him to realise he had even managed to suppress that memory from long ago. He had walked away and left that cold dark place. He had went as far as he could go and he had started a new life. He had became a new person. Every morning in the mirror he saw that new person staring back at him. A new person with a new face. A new face with a new voice, but there was no hiding from the truth.

There was no hiding.

The new voice still knew all the old songs.

“Sir?” said a soft voice to his right.

It took a moment for him to realize he had drifted away for a second. He turned to see a young man standing there with a younger red-faced lad slightly behind. The older boy was around 19 and dressed in shorts and polo shirt. The shirt had an insignia of some sort but as he had left his glasses in the locker, he couldn’t quite make it out. The boy was holding an oil can in one hand and gently lowering the bonnet of the golf cart in another.

“Err, yes” he replied to the attendant in that voice that came from everywhere yet nowhere.

“Tom here says Reception have a phone call for you Mr McCann. Its a Mr Dempsey from Scotland, He says you’re going to want to take it”.

The man paused then smiled. He paused for another second to take in the pungent oil vapours one last time and said “Thank you son, thank you very much” before placing his 3 wood, his flat cap and his golfing Glove down on the Golf cart bench. The man then  turned left and headed off toward the clubhouse.

The two boys watched the small man as he quickly head up passed the treeline.

“No Tip?” said the younger lad still catching his breath.

“Hahaha,very good” replied the boy with the oil can.

Excellent! But Fergus would probably never ‘drift away for a second’ even when asleep.

I should have said “drifted away with one beady eye open”

Desi,
Very creative.A journey to end all journey’s!
At first,I thought it was about Bondi Brian, reminiscing about the good old days.

Excellent. Thats like the opening of a film, Desi. Get that script done!

At first you had me thinking you had been transported back to the days when I went to games on a supporters’ bus just like the one in the photo. And that smell of oil has just cleared my troublesome sinuses for another few years. Your description of the freezing cold and the grumpy driver was a mirror image that had me believing you had powers beyond the natural. I thought you had just forgotten to mention how the driver kept the quarter window on the driver’s side permanently open so he could tap the ash from his pipe with experienced ease. He was totally oblivious of the stalactite snotters forming on the end of forty odd noses and totally ignored any attempts to make him aware.

Thankfully, the story was much deeper and less frivolous and brought back much happier and consequential memories. For a wee while I even thought I was there in spite of not being a golfer.

A story well worthy of the 19th.

‘Not one thin dime’

Fergus would tip those that had deserved it. And only them.
Great stuff Desi, been missing the wee story articles on etims. If i was any good and had the time i’d try and contribute but i’d not like to lower the impeccable standard if the site…