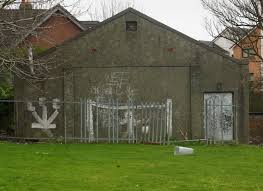 Charlie finished his Weetabix and rose from the table to put the empty bowl in the sink. It joined the plates from the night before in the now cold and soapless basin of water that his mum, Louise, had left there from the night before. She only washed up once a day, there didn’t seem a lot of point in doing it all day.

He went through to the front room where she was sitting with her phone in one hand, runing her finger down the screen with the other as she caught up with the latest gossip and scandals on the scheme.

She didn’t shift her gaze from the engrossing tale of her bestie Eilidh who had only just got home and wasn’t all that sure about where she’d been, who she’d been with but she  sure as hell wasn’t going to do it again.

Charlie raised his voice a notch.

” Have you put the bowl in the sink and finished your juice ? ”

Playing football out in the concrete front garden of the two bedroom semi was actually just kicking the ball against the space under the front window , but to the six year old Charlie he was at Hampden, and the crowd roared its approval every time he found the spot he was aiming at. Left foot, right foot, throwing it up to head it. It was all the same to him. and after one of his better efforts, he would mimic the commentator,

“McIntyre has done it again, and the crowd has gone wild “

before wheeling away, arms in the air , to accept the praise of his devoted fans.

” Aye, alright ” his mother replied ” but if the ball goes into the road, shout me and I’ll fetch it ”

She looked up from her phone and smiled

” Thats a bad road, and some o’ the boys round here are clowns ”

Charlie was already through the door before she heard him agree.

Louise McIntyre had Charlie young, she was just sixteen and her own parents had wanted nothing to do with her or Charlie. She’d made a mistake in their eyes, and thrown away her life. It didn’t help that Charlies father was considerably older than her, and already had a family, so her dad couldn’t even go round and sort him out. Louise had never told him who he was, in fact she’d only told Eilidh. Who had sworn to tell no-one, and surprisingly hadn’t. Dad, though was never going to turn up at the door on a Saturday asking to take Charlie to the park. In fact, after she had left his front seat  years before, he’d never been in touch again, and she doubted she would recognise him in the street if she saw him. Although Charlie did have his Dads shock of violent  blond hair, and there weren’t too many like that in the east end of Glasgow.

After that incident, her points total with the council shot up, and she was offered a two bedroom house, and , mainly because there was nowhere else to go, she had resolved to bring the boy up best she could. It wasn’t his fault she’d been stupid, and anyway, he was the best thing to ever happen to her. She wouldn’t change a thing.

After all, he was a great kid.

With Charlie out in the yard, she opened the window, lit her first cigarette of the day, and went back to her phone.

Across the other side of the estate, Billy Kerr was in trouble.

He’d just woken up, noticed a shitload of missed calls on his phone from his girlfriend, and his head hurt. No, his head really fucking hurt. And it was probably going to hurt all day.

A few beers with the lads had turned into a few shorts with the lads and the session had only finished about two hours before, when he had finally expired in front of whatever shite Sammy had put on the telly. He’d lasted until Clint Eastwood had told some Mexican guys that they’d better apologise to his mule, but then he had given up. Well, his body had given up.

Jackie, his girlfriend wouldn’t be giving up. she was only just starting.

“And exactly where the fuck are you” screamed Jackie ” ah’m fuckin sitting here without a teabag in the house and you’ve got all the money. the weans have nae milk for their breakfast and you’re out on the drink again ”

“Sorry doll, I’m in my flat. Me and sammy had a few beers and I fell asleep. ”

Technically, he was in his flat. Well, his name was on the rent book, but he took Sammys housing benefit, and lived with Jackie in her house. In Camerons Britain that was more common than the council would care to admit, as it would have meant they’d have to do something about it, and resources were scarce.

And in Camerons Britain, no-one did anything unless they had to.

Her rant didn’t stop. In fact, he’d just poured petrol on the flames.

” You bastard. You think you can just come and go as you fucking please, and treat ma hoose as a doss hoose. i’m sick of you, and you can just stay there as far as i’m concerned. Wait, naw, you can come back here and get your stuff. Ah’m pittin it in bags”

She cut the call. Billy sighed, and leaned back on the couch.

Charlie continued his game. His imagination was in full swing, and the broken toys and empty tins in the yard were hulking defenders, lunging at the ball as he swept past them, twisting and turning , stopping and sprinting, before firing in another glorious strike to add to his already impressive tally.

Auld Mick from next door was watching him, his unlit pipe dangling from the corner of his mouth. He’d quit smoking when it got too expensive, and he didn’t want to bother with the cheap foreign stuff. He didn’t think it was the same. But he’d kept the pipe.

Charlie stopped. Picked up the ball and sauntered over to the fence, smiling.

“You still playing in that team up the park ? ”

” Aye. Mr Donnelly says I’m getting better. and we’ve a big game on Sunday. He says he’s countin on me to get a couple. ”

” The man knows his football. What time are you playing.I’ll see if I can get along and give you a cheer. ”

” Ma’s takin me up there after breakfast”

Louise always made him say the word properly, in fact she would often correct his east end twang, out of habit, mostly, but Charlie always listened to his mum. He had no-one else to look up to.his dad was away in the army fighting some bad guys, and hadn’t been home for a while. Mum said it was a war against people who blew you up for no reason, so he’d be away for a while yet.

“Get her to chap my door and I’ll come with you. ”

Micks own family were long gone. his two boys had moved to England to get work, and although they phoned ebery o often, they had families of their own now, and that took up all their time these days. Now and again they’d come up for a weekend, but with every visit, he felt they were moving further away from him. He didn’t mind. at least they were making something of themselves. and the old fellow reckoned if he really needed them, they were just a phone call and a few hours away.

Charlie returned to his game.

The phone rang again, jolting Billy back from the hazy world he was slipping back into .

“And your tv is gauny be in the street in five minutes flat. ”

Still confused, Billy wondered why the tv would be flat in five minutes. It was already flat. That was why it cost so much.

Then he woke up fully.

Sammy didn’t move, but Billy caught sight of his keys on the coffee table, amongst the empties and the burned down rolled up fags. Sammy liked his Moroccan rollies, and Billy had partaken of a couple as well. He usually did after a drink.

He ran to the door, and sprinted out to his car. It was parked half on and half of the kerb, with the drivers side on the pavement. Earlier this morning, he had just wanted to get back before one of the police cars that cruise the estate had seen him. He had a brakelight out, and that was an open invitation for them to put on their lights. If Billy had been breathalysed, he would have been eligible for his bus pass before he saw his licence again.

He fell into the car, started the engine, and turned up the cd. If she smashed his telly, then he was going to smash her.

About a mile and a half way, on the same straight road that ran through the middle of the scheme, Charlie was preparing to take a penalty. The regular guy was injured, and  captain Charlie would have to step up and do the deed. If he scored, the cup was theirs. If he missed , the game was lost. Thats the way the rules were when you were six. Everyone knows that.

Facing the front of the house, he placed the ball on the spot, and retreated a few steps to get his run up just right. He waited for the referee to blow his whistle. The ball rolled a wee bit to the left. Charlie walked slowly forward, and put it back on the spot.

The phone rang again, and Billy fished for it in his jacket pocket.

Whatever it was Jackie replied, it had Billy screaming into his phone. Then he threw it towards the passenger door, where it bounced back and landed on the floor. He dropped a gear and pressed down on the accelerator.

Charlie raised his head, the referee blew the whistle. He struck the ball cleanly and it flew at the ventilation grid a couple of feet under the window. In off the post ! Charlie wheeled away. He’d won the cup.

The ball rebounded onto the street. Charlie saw it. So did Louise, who had always kept an eye on him from the window. He waited for her to come out to fetch it

The phone rang again. Billy automatically reached into the passenger floor well to answer it. Then he looked up.

Billy saw the ball bounce across the street, just a few feet in front of him.  and instinctively slammed on the brakes and swerved away from it.

Superbly written, powerful work, takes you back to being a kid in this vivid script then hits you at the end. Left me speechless.

Thanks. It kind of disturbed me the way it ended as well.

So I’m sitting hear having my breakfast and crying – thanks Ralph.
Seriously good story and well written. I am in awe of you guys who can produce the stuff you do every day for love while holding down a job and dealing with the incoming from the Mrs Ralphs of this world.

Been a while since we’ve had a wee story. Great stuff, emotional and superbly crafted. Thanks for taking the time to share.