Skip to Content
Home Home Page Diary Celtic Diary – Sept 12th
Ralph Malph 8 Comments on Celtic Diary – Sept 12th
Wednesday September 12
Just three days into the long and arduous qualification tournament for Brazil 2014, and Scotlands tartan army have been spared the ordeal of scrimpimg and saving for the flight money. Craig Leveins side stuttered to a 1-1 draw with Macedonia, meaning that after two home games his team sit fourth in a six nation group with the games against the top sides still to come. Fans booed the team off the pitch, and Gary Caldwell, once of Celtic (though we’d rather not recall that) put some of the blame on the crowds negativity affecting the players.
Manager Levein trotted out the usual early days yet, and other teams will drop points etc, but even with his dark glasses on, he must see that he’s blown it. Other teams will drop points, but not against Scotland.
The game did get a wee bit exciting, largely due to James Forrest and the eventual inclusion of Jordan Rhodes, the latter coming shortly after Levein realised he hadn’t got any forwards on again, but it was too little , too late, and frankly too poor.
Its not neccessarily too late to change things, but lets be honest, Levein isn’t the man for the job. Kenny Miller scored last night-his seventeenth goal in sixty two games, which is unacceptable for a striker at any level, and whoever told James Morrison , Charlie Adam and Christophe Berra, amongst others, that they were international standard clearly wasn’t talking about football. Its worth noting that in his two appearances for Scotlands U-21s-his first at any level, Tony Watt has scored twice in two games. Not a calling for full status yet, but a sign that there is a generation of young Scots that should now be groomed to take over from the somewhat inept old guard.  Thats not grooming in the sense of the dodgy guy who hangs around schools with a packet of haribos , asking kids if they want to go to the pictures, we hasten to add.
Never mind, the domestic game returns this weekend, and Celtic travel north again to Perth to face a struggling St. Johnstone side. Kelvin Wilson reckons the international break has done everyone good, and loads of little injuries have had time to clear up, with the additional bonus that Scott Brown has been away to see a hip specialist. Thats a specialist who says “Groovy man” at the end of each sentence, and hangs around with the cool kids.
Gordon Strachan, former Celtic manager turned football pundit, has played up Celtics chances in the champions League, and praised manager Neil Lennon for the work he has done in getting there. Visiting a coaching school in Edinburgh, he pointed out that good players win games, not systems, which makes it even harder to see how he took a relatively poor Celtic side to the last sixteen of the top tournament, and only lost in extra time to a very good Milan side. The wee fellow, despite his critics, knows his stuff, and reckons that in a couple of years, current boss Neil Lennon will be an even better manager, and hints at more to come from the side assembled at Celtic Park.
Charles Green, the owner of Rangers, as you know, did not attend the hearing about the dual contract issue yesterday, which continues today. Thats because it doesn’t affect his club, which he says has never been in the SPL.
Dont believe us?, Heres a picture taken of todays Metro report 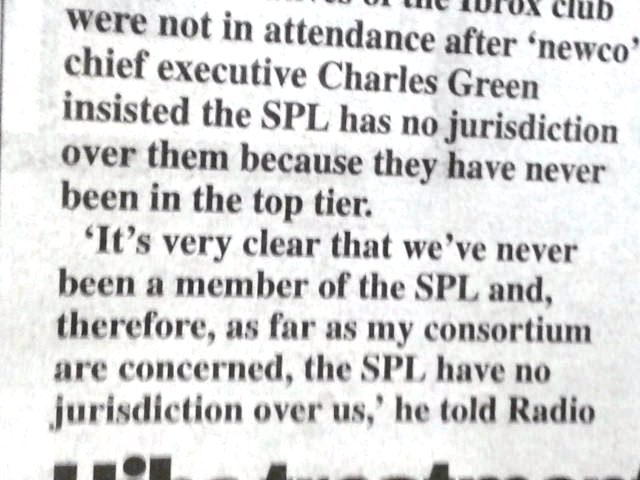 Fair enough. With UEFA handing out money based on Euro 2012 appearances to Celtic-just over £450,000 and other SPL clubs, we are sure that this is something else his noble new club will reject. Although when you look at it, they have no right to accept it anyway, and of course Hector will be looking closely at any continuity links between the old and new set ups.
Something else bubbling away quite nicely is highlighted in an article in the Scottish football monitor, which if you google it ( or Goose it as you will!)  you will find. It seems that David Murray, who once claimed he was duped by Craig Whyte when he sold Rangers for the vastly overpriced sum of £1, may have been “duped ” by him before. The article suggests the shady duo have been at it for a few years, in shennannigans involving ticketus and a number of other companies, which all amounts to another wee bit of creative accounting. Of course, we can rely on the mainstream media to pick up on this, and all will become clear shortly. But just in case they don’t, for whatever reason, have a wee look.
Something else that has been attracting attention in interwebland are the viewing figures for the new Third division club, and comparisons with Celtics. Barb.co.uk, which compiles that sort of thing, says that on September 2, the Rangers game was watched by 85,000 people, the only Celtic match I could find was the Helsingborg game that week, which attracted 256,000. no conclusions can be drawn from that, of course, except for how low they are anyway, but it is interesting to note that the Hairy Bikers and Scooby Doo and the Loch Ness monster got more viewers than Rangers, whilst Notts Forrest v. Wigan got 10,000 more than Celtic.
The biggest football figures for that week were the two EPL games on the sunday, which were watched by around 1.5m, or a cost of about a fiver a viewer, which to me points to an unsustainable investment. Of course, advertising revenue and overseas sales must be added to this, but when you consider that overall the four Sky sports channels combined had an audience share of just 2,2 %, compared with 9% on channel four, or 26% on BBC 1, it doesn’t seem to make sense. BBC 3s Family guy on Sunday was watched by more people that watched either SPL game.
Finally, Roger Mitchell in the Herald points out a few truths to Charles Green, reminding him, amongst other points, that the new Rangers club doesn’t have any titles or trophies they can be stripped of, and even warns of the dangers of him winding up the Rangers support as he pursues his goal of stock market flotation. How the hell did that one get past the editors?
Finally final, which Celtic player, on a social network, is terrified that the club will sign another player with the same surname, meaning he will have to use his first initial on the back of his shirt after he realised what it said when he used it as a password of some sort?
0 0 votes
Article Rating
CelticCeltic DiaryEtimsRalph Malph

Tony Watt is that player methinks

Never mind google an ‘article in the Scottish football monitor’ – where is a link? (I’m not workshy, i tried to googly it and coudnae find it!)

In my view, the less Celtic players in the Scotland squad (or any other nation for that matter) the better. Our priority is success in the CL, and these games, which are just glorified friendlies for our players as their respective countries are very unlikely to reach the Finals, just get in the way and cause injuries – Sammi as a prime example.

According to his facebook, Tony Watt used “Twatt” as his name on something else. He has so far not had to use it on the back of his shirt.