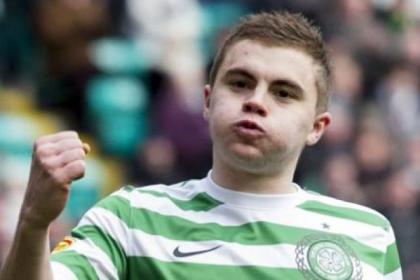 Forrest sat on the bench at the training complex his head in his hands, where had it all gone wrong. He needed to talk to someone.

The old tea lady had come out for a fag to find a distraught young man sitting on the smoker’s bench. She ignored him while she got out her battered tin of golden Virginia and began making a smoke. With a final lick it was finished, she lit up and turned to the bhoy “Well young man what have you to say for yourself”

Forrest started at the beginning. “I remember when I was at school and addicted to football, my primary school teacher always shook her head when I would flunk the end of year exams, I can hear her voice as if it was yesterday” “You’ll never amount to anything young James, kicking that ball around all day” He sighed, he had liked that teacher. She would always say to him “stupid is as stupid does, James. Don’t ever forget that.” He hadn’t.

The old tea lady took a long drag and blew smoke rings into the air. “Go on Jamsie” James stared into space for a minute before he continued. “I was good at tennis once you know, they thought I would amount to something but I have always wanted to play football.” The old tea lady smiled as James continued. “I remember the time a guy called Andrew Barron Murray had come down to the Prestwick Tennis Club, obviously I never knew who he was back then but he was interested in my two-handed backhand and made me show him the technique again and again until he’d perfected it”

The old tea lady’s smoke break was up and she laid a hand on his shoulder “You’ll be fine Jamsie, you’ll be fine” She went inside. The kit man had been watching Jamsie all morning and was concerned. He watched the old lady go back inside and took his chance to join the bhoy on the bench.

Forrest didn’t notice the change in listener and continued to reminisce. “I remember all the youth games fondly but the highlight for me was the four year contract in 2009……”

The old tea lady came out for her second smoke break of the day to find Jamsie talking away to himself and the old kit man asleep on the bench beside him. She sat down on the other side of Jamsie, took out her tin and quickly made a ciggy.

Forrest had paused when the old tea lady had sat down; she had smiled at him as she made her cigarette. He thought back to recent events and couldn’t believe how daft he had been. What was he thinking? It had always been his dream to play football at the highest level and here he was allowing people to lead him astray. Getting smashed out of his head with alcohol, he was meant to be an athlete ffs. What had it achieved? His football form was suffering and he was not only letting himself down but also the club and more importantly the fans. He had died of embarrassment when he had been arrested, how would he ever live it down?

The old tea lady put her arm around Jamsie “The future is in your own hands James; just remember what I told you all those years ago, stupid is as stupid does, James. Don’t ever forget that.” He Had.

Unless theres some sort of divine intervention very soon and Jamesie turns into a proper footballer then im afraid his we arse (not exposed this time) could be oot the door, and let’s face it he is still the most vastly overated player lenny and Celtic hav had in a very long time, any interest from other clubs in the region of a couple of million ££s or a KFC BARGAIN BUCKET then by by James.. hail hail, KTF+

And the scapegoat of the month award goes to…

Tony Watt…..they sent him to Belgium ye know (shifty eyes)
His crime was to score the winner against Barca in front of 60.000 screaming fans and get a big heid’.

Poor Tony just think what might have happened had he played pish every week then got his sack oot at the Crimbo Do?

What the fuck is this? Can’t believe I wasted my time reading it.

WTF…..Call yourself celtic fans. Never done something stupid with a drink in you? Ever had the fortune to have been forgiven for doing something daft?

I took the article as a message to forrest to have a think about his career in general. ot just the alleged antics in the pub.

Nail on the head Ralph.

I always think that Forrest should have been played centrally, like Craig Bellamy, but the ingrained Scottish mentality of Mr Lennon makes him stick him out on the wing. Just like Watt and McGeough. If they were Spanish they’d all be central players.

As for the bum flash, I’m sure he’s learned his lesson.

My main concern for young James is the amount of time spent on the treatment table – he always seems to be out injured.
I rate him highly and hope he can prove some people wrong. Forget the pub “incident” and buckle down young man – we all make mistakes.

I know I have been posted missing for a while but I am back with my honest opinion of the blog and its subject.

Those commenters who say James Forrest should not be criticised ought to reflect that much of the tone of their remarks was criticism + of Brian 53 who has a greater right to an opinion than Forrest has to being protected. Besides, in my opinion, they were ill conceived comments in that they totally misconstrued the gist of the piece. I think Ralph probably hit the nail when he said it was meant to be a little tale of a “wake up call” as it were. I would go further and say it should be one of the “growing up” variety. Whatever description one wants to attach, it tells the “Chump” to get a grip or his future career is in doubt.

As for me, I can not accept that professional footballers should be, as it is often put, given some slack especially at such a young age. They are given an exceptional opportunity and very good wages to be “different”. They are obligated, therefore, to be ultra-careful how they behave and to be totally-committed to their job. I will be the first to forgive any slip and to condemn media harassment simply because they are in the public eye, but we, as supporters and “employers” of their talent, have the right to criticise them if they do not conform to standards. Do you think any other young man in another profession would be shown sympathy if he brought his company into disrepute by unbecoming behaviour? Would his tender years count one iota? In fact did any one’s tender years stop them from being rebuked or punished at school, at home or at work? No. In any other workplace, it would be out the door if feasible and if not, warnings that could eventually lead to the sack. At best conditions would be put into effect to force one to leave. Even the Greatest Celt of all time, wee Jinky, while admired and applauded for his charisma and skill, was regularly berated by fans for his misbehaviour. Forrest could not begin to lace the wee man’s boots nor drink him under the table either.

Anyone who has paid attention to my comments over the years, and I would lay no blame if no one bothered, will know I have never been a fan of James Forrest. I watched him in the reserves regularly and rated many other youngsters as better. When he came into the first team, he was hit, miss and missing. Only now do some fans seem to be making an assessment of his ability other than the one fed to them by the media and the Celtic greasers. Out of position, out of sorts out of his trousers, to me he is not up to standard and I would not shed a tear if he was put “out”.

Spot on Brian, if taken the right way…..and I hopefully did! Cheers for that