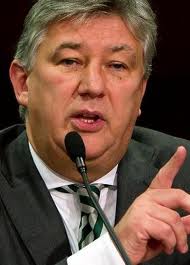 A short, sharp statement from Peter Lawwell has hinted that he is not happy with the way Victor Wanyamas agent is doing his business. After Ivan Modia claimed that the Kenyan midfielder had lost £1m in earnings and not moaned, instead carried Celtic single handedly to a double and a last 16 champions League place, pausing only to sweep the stands on his day off, Lawwell gave us his thoughts;

“These negotiations, like any other, are carried out by Celtic in a proper, private and professional manner. Celtic carries out its business with integrity, we work to the highest standards and in the interests of the club, our supporters and indeed our players. We do not need to comment any further. ”

Clearly implying that Modic is the exact opposite. Sadly, all this can only mean that Wanyama, unless he returns from his break and sacks his agent, is going. But we have become used to that idea by now.

Nice to see that the Daily Record , in its usual refreshing and novel style, have claimed that the relationship between Celtic and Wanyama has “broken down”, but the player will hold out for more “potential escape routes ”

That paper would pay the deposit for any club who wants to buy him if they could. Remember, when you go to the paper shop, just get the fags and the milk.

A comment on  yesterdays diary, from regular contributor Maniche gives an idea of how things might pan out. He claims that his pub landlord met Lennon, asked who was away and was told Wanyama, because his agent was not a nice chap. That might not have been the exact description, but you get the point.

Walesonline has Joe Ledley urging Celtic to try to keep Wanyama and Gary Hooper, as he feels the club is going places, and the players have a strong bond. Perhaps Joe could give Victor his agents phone number.

Reports indicate-which is the sort of phrase used by the MSM when they make something up-that Hull are ready to increase their £4m bid for Gary Hooper. Hooper, meantime, has been spotted wearing a “No Means No ” t-shirt around town, which would save Hull any further embarrassment, and also keep their phone bills down.

Ibrahima Toure, who scored 18 times for Monaco last year, is currently surplus to requirements in the principality, and is looking to leave. Celtic are rumoured to be interested, with a loan move being mentioned. But not by me. Monaco have just been promoted to the top league, and the player was looking forward to proving himself, but said if the “coach doesn’t give you the chance, its normal to think of an exit. ”

There is still no word from UEFA as to whether they will allow the ties with Cliftonville to be switched around, but hopefully we will hear before kick off. Again, both clubs are warning fans not to make any travel arrangements.

Charlotte Fakeover, who may yet prove to be our own Woodward or Bernstein, has confirmed what we already knew when he/she released a  copy of an email showing exactly how far Darrell King, former radio and newspaper man, had his head inside Craig Whytes bottom.

King , of course, is free to say what he wants. But surely it would only have been polite for him to mention why he was saying it? Anyway, he’s in Florida now, writing about flowers, or something. Perhaps he saw which way the wind was blowing.

However, the Daily Record , presumably while all their usual staff are away on holiday, have allowed this to sneak through today. 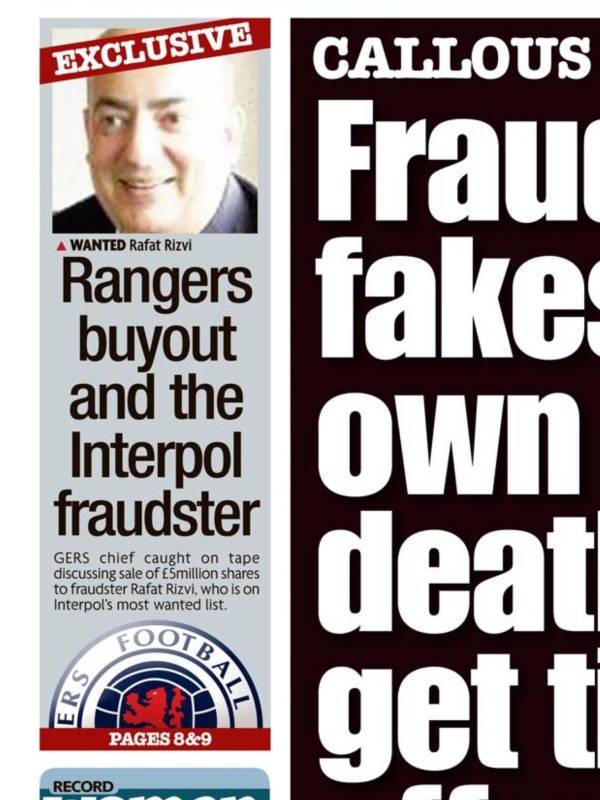 Alright, its old news for those of us who follow Charlotte, ( its more or less an old Charlotte tape re hashed ) but it could be the start of a real life , grown up look into the shennanigans at Rangers, while most of us can still remember who they were. Well, until the permanent staff get back and all the temps are fired.

Something else they should look into, perhaps maybe one for the the financial section of any paper, is this blatant use of a dead company brand to try to sell a new companies wares. Known as fraud, this picture is fairly strong evidence that customers are being fleeced, and offered products which are not what they pertain to be. 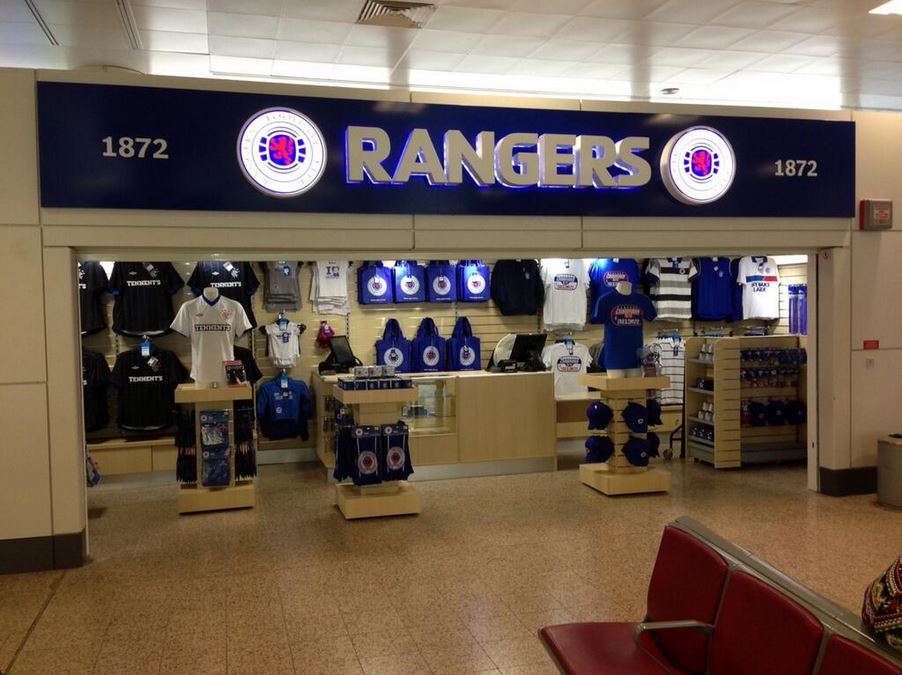 Unless , of course, its one of those “retro ” shops, where you can buy Sony Walkmans, Spangles and those adidas t-shirts with three stripes on the sleeves. 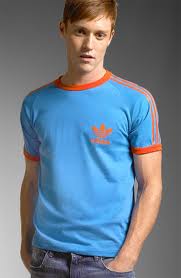 Actually, with an iron on ” Blackthorn ” logo, that might well be their away top next season. Notice the shop is unattended, and no-one is trying to nick anything. Surely with funds tight at the new club, kit man Jimmy Bell could have seized the moment and saved his bosses a few quid ? Oh, wait. They still have the old Tennents strips. Surely there isn’t a problem with the new kit deal ?  The one where Puma boasted of supplying “training and technical ” kits. Strangely, they never mentioned playing kits… Perhaps its the iron on tops after all.

Anyway, its not all bad news for them. Ricky Foster, who played for them a while ago, has returned to the club to add to the already formidable line up assembled by Ally McCoist for what is quite clearly an assault on the two major Cups this year. The Magnificent Seven signings show just how serious the rookie boss is to make the final of a tournament for the first time in his managerial career, although, of course , in reality, it is only the fabled loving cup he will get his hands on. For those who don’t know, thats the worthless piece of pottery the heidyins at Ibrox drink from to toast their Queen at the first home  game of every season. Usually done with all the awkwardness of  hugging your auntie at a funeral.

The front page of the site has a number of links to an excellent podcast, recorded last night, where amongst other things, former Captain and true Celt Tommy Boyd tells us what it was like to play for, captain, and above all win the league  with Celtic.

He also lets slip, in a refreshingly admirable honest way, something not known until now, exactly what it was that won the league back in 98. The one person, more than anyone else, who he feels was responsible for what was the best day in many Celtic supporters lives.

Oh, and he also tells us how the other players prepared goalkeeper Johnny Gould for the game. Which probably won’t catch on.

It was a pleasure to listen to Tom when he spoke, and for me, it was absorbing listening to someone who knows what he’s on about. Which , to be fair, is unusual for one of our podcasts. Tom does most of the talking, which is as it should be, and you’d be hard pushed to find a more honest, open and often amusing interview.

Lubomir Moravcik, the man signed instead of proven performer John Spencer, who threatened to make Celtic look inept, was the man who said those words in yesterdays diary. He who was “never a zero ” graced Celtic Park towards the end of his career, and made us all believe again that football was a beautiful game.

” I’ve a funny feeling I will miss this place more than it will miss me. ”

When he left, who made this eerily prophetic remark ?

Peter the pointer Grant or skip to ma Lou macari!

I’m all for not buying the daily sevco but do I have to buy fags? I hate smoking.

The only transfers I am interested in are the ones that you lick and then peal off. That way, if you get it all wrong a good scrub gets it all back to normal. As for the inside story in the rag, I always wondered how there was more sh** on my bum after I had wiped with that paper. Now I will never know. Gie’s a fag, man!

If you use your imagination (yes, a big stretch, I know) that shop front almost looks like a church sanctuary, altar in the centre, two pulpits at each side, drips, sorry drapes hanging down the back and a limbless parson giving a sermon (on tax avoidance, no doubt). The reason no one is there? Same old same old just gets boring. Och, gone, gie it five stars for effort. The manager was seen wobbling along the pavement with a Gregg’s pie in his gob yelling “Oy! ffs find out who nicked the doors or it could oor turn tae be robbed. Aye, see whit the SFA can dae tae shore us up.”

I once had the great privilege of sitting next to Tommy for a whole evening at a club annual dance. He was a true gent and never made you feel he was any better than you. He was happy to listen to what you had to say and showed great respect for the Celtic support. It was a terrific evening and a joy to be in his company. I am about to listen to the pod-cast after I post (if God – and Desi – are on my side tonight) this comment.

I wondered how long it would be till I was caught out with the quotes. However, I am going for John Barnes as I have great empathy with losers.

The fat Aussie. Not McDonald. The other one …