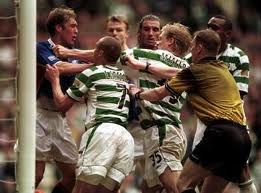 Assistant boss Johann Mjalby wants all talk of a Hampden hoodoo to stop. Celtic face Dundee Utd on Sunday in the national stadium, with a place in the Scottish Cup final up for grabs, and everyone is happy to remind us that we haven’t being doing to well of late in Mount Florida.

“Hopefully , this Hampden hoodoo that we have got right now is forgotten about. (Presumably he means by the team) We just need to put in a good performance, and why not? The confidence should be there because against Hibernian we played quite well and if we put that into the game on Sunday its going to be hard for Dundee Utd to live with us.”

“Its probably only us in management that thinks about it, not the players.” (It has crossed the fans minds as well )

“You’re scratching your head and wondering because theres no reason why we haven’t really performed there. Its important for us to make sure the players don’t really think about it and just go out and play their normal game. If we make sure we defend the way we should defend, we know we have so many good players going forward that we know we will create chances.”

So, whatever we are worried about publicly, we won’t mention to the players.

Maybe its just that the other teams aren’t sitting back in the big games, and are making a go of it.

Anyway, Victor Wanyama will be available after his red card was downgraded to a yellow, which surprised everyone, and forced the big Kenyan to cancel the weekend break he had booked.

Kris Commons says he enjoys playing at Hampden, and reckons we were just unlucky to have lost there the last few times., but his was the most telling quote of all;

“When people play against Celtic they have nothing to lose, and everything to gain, and when we are not at our best people take advantage.”

It will be difficult. It will require concentration and effort. Certainly, the recent drubbing that Jackie MacNamaras side took at Celtic Park will count for nothing, and they have the players to hurt Celtic. Its going to be as difficult a game as any this season, and in a way, it’ll keep an interest level until the final day, for players and fans if another trip to Hampden is booked.

Elsewhere in Scotland, Dunfermline Athletic, the club where Jock Stein made his name as manager, slipped into administration yesterday. The administrators , Robert Barclay and Bryan Jackson have already made cuts, overseen redundancies, and are fairly confident they might yet save the club, without it having to become The Dunfermline, and save them from entering the surreal world that engulfed another old Scottish club last summer. We wish them luck.

With the reconstruction debate about to crank up a level, chairmen need to look at the big picture, and try to do whats best for everyone. Not easy, but ganging up on Ross County chief Roy MacGregor  isn’t going to help. Despite all the bluster from Aberdeens Stewart Milne.

Paul McMullans hat trick helped the U-17s to a 3-1 win in their game against Dynamo Kiev in the Spartak cup in Moscow, but the official site doesn’t tell us if they’ve progressed in the tournament. The u-20s haven’t in theirs, losing 2-0 to hosts Al Ain in their semi final. They will now face Inter Milan or Dinamo Zagreb in the Third place game.

“And if they lose that, they can walk home” said a disgruntled source.

Journalist Tom English of the Scotsman reckons I should “read the stuff he wrote about Green from the start before drawing daft conclusions”, completely missing the point. Still, at least he stood up for himself.

English has, probably more so than any other member of the MSM, spoken out about Green, but again, its more about what hasn’t been asked, than what has.

As far as that club and its goings on are concerned, its probably time to suspend operations while the relevant authorities look into what is really going on.

For example, in the Sun, Imran Ahmed speaks warmly of his chum, the “tight Northern git ” Charles Green, and how he has made New Rangers the most “stable, cash rich  club in the UK”

No one asked about the players who have left, no-one asked about MacDowall or Durrant leaving, or the physio, or the stadium manager. No one has asked any of the hundreds of creditors to oldco how they feel about watching “Rangers ” carry on trading, with the same premises, the same brand, the same customers, the same management, and the same attitude to paying bills.

Meantime, the police are raiding premises up and down the country, as they look into the Whyte takeover…

No one asks any questions.

Perhaps it will all just go away, and Walter Smith and some blue Knights will get the Third Incarnation of the club in time for next season, after everyone else has bolted and shut the doors. Third Rangers, as someone said on the Etims podcast last night. It does have a ring to it.

Speaking of the podcast, four Celtic fans pay tribute to Margaret Thatcher and her, er, contributions to society. Charles Green gets an honourable mention, and the problems of Scottish football, scottish law, and society in general are all solved. Next time.we’ll get Kim Young Un in , and solve that crisis as well. Well worth a listen to.

Go to the Podcast page or just play it on the Podcast Player up towards top left of the site. You can also access at the Etims Podcast Site www.etimspodcast.net or the Etims Spreaker radio site and if that isnt enough and its even on iTunes!

London was the odd one out yesterday, Davie Hamilton, Sam Glasgow and Dion Dublin have all played for Celtic.

Right. something for the weekend. The four Champions League semi finalists are Barcelona, Bayern Munich, Real Madrid and Borussia Dortmund. Whats different about one of them?

Real madrid doesn’t have a B in it

madrid maybe, only team that hasnt had a celtic player in their ranks.

Wild Guess, Real Madrid the only one not to have an ex Celt play for them? Barca Henke,Dortmund Lambert and Bayern Rambo?

I know you are trying to forget Tommy Gravesen but you can’t write him out the history books!

Thomas Graveson played for Madrid (although arguably not for Celtic).

Dortmund is therefore the only team of the four two have had two ex-Celts, the others had one

Real Madrid are the only ones to invite Celtic to a testimonial.

Dortmund are the only ones not based in a capital city – Madrid (Spain), Barcelona (Catalonia), Munich (Bavaria)

Regarding Dunfermline. I was listening to BBC Sportsound the other day and it was mentioned that Dunfermline may not be allowed to compete in next season’s Scottish Cup because of the withheld gate money due to Hamilton (I think). I thought, why weren’t The Rangers threatened with that because of the gate money withheld from Dundee Utd, then it struck me, different club!

BArcelona have never won a European Trophy in Glasgow.

If they become Third Rangers does that mean their new nick name will be the Hun Huns?

Speaking of the Official site, it is probably the worst, piss poor and embarrassing Club page out there. Considering it’s the portal to our club, fans who are not too aware of us must think we are a 2-bob outfit.

Dortmund, Bayern and Barcelona had ex-celts, Gravesen played for Madrid before he ‘played’ for Celtic. Lambert did play for Dortmund first. I think the San Miguel answer is the correct one.

munich the only one we havent signed a player from,gravesen,crosas and lambert from the others

Just a quickie to say the diary was a great read today. My grandson has pretty well commandeered my computer all day so I have not heard he podcast yet. I hope to enjoy it in the peace of the night. I will just add that maniche sure hit a bent nail on the head with his critique of the official site. Memories of the old Celtic View come a flashing.

One has to give it to the young ones mind. Considering their age and the conditions, I think they have done well overall even though it would appear the under 20s in their last game against Al Ain performed a bit like their seniors do in their cup games.

I do hope Dunfermline prove the guardians of our game to have been hasty in their approach to saving Scottish football by ensuring the recognition of what is actually a hologram. I wait with bated breath to see if a hologram can be created from a hologram. With the flexibility in SFA rules anything is bendable even the backwards or Rangers as they were once known (that’s slightly subtle, so advanced apologies).

I reckon there is a choice of answers today but my bet – which has led to nothing but ruin for all who have gone along with any in the past – is Real as the only club not to field an EX Celt.

Barcelona is one word..The others are two