Real football returns this weekend with a trip to League Cup winners St. Mirren, and the Celtic side will form a line and applaud them onto the pitch. In the new Rangers free world of Scottish football its good to see everyone getting along and turning the game into a nice day out where sport is the name of the game and everyone wishes everyone else a thoroughly nice day.

Its uncertain whether any goals scored by the Paisley side will receive a round of applause from the Celtic players, or whether any  fouls commited will be followed by sincere apologies and an offer to buy the victim a drink.

Ach, maybe a wee bit of cynicism is creeping in, because there is no harm whatsoever in recognising what for St. Mirren is a tremendous achievement. As long as we take about seven off them afterwards.

There are also plans to show the “red card to fan criminalisation”, as a peaceful protest against kettling our corteos, which if I had the faintest idea what it meant, I would support wholeheartedly..

Manager Neil Lennon will have a look at his players as they arrive back from the corners of the earth after their international exploits, and hopefully pick a team which doesn’t give the buddies the now customary matchday bonus of a couple of goals.

One player who says he is staying at Celtic is Joe Ledley, who said Aaron Ramsay told him that he was going back to Cardiff. Ledley replied that it was the first he had heard of it, and is looking forward to next season at Celtic, which is the last one on his contract. Ledley came to Celtic on a Bosman, and we need to be careful that he doesn’t go the same way…

Speaking of midfielders, its a year and a day since Stilian Petrov was diagnosed with leukaemia, and just a wee word here to wish him all the best in his fight with the disease, which is now in remission. Villa boss and another ex-Celtic midfielder Paul Lambert praised the Bulgarians battling qualities, and is set to offer him a coaching role at the club.

Still on Villa, the Belfast Telegraph headline was a little strange, “Bent back to help Villa”, especially as they didn’t say whose bent back it was.

Elsewhere in the media, congratulations need to go to Radio Clyde, 1 and 2, who clinched the runners up spot in the Independent Radio News story of the year awards.

Mince, from Celtic minded , sent us this yesterday 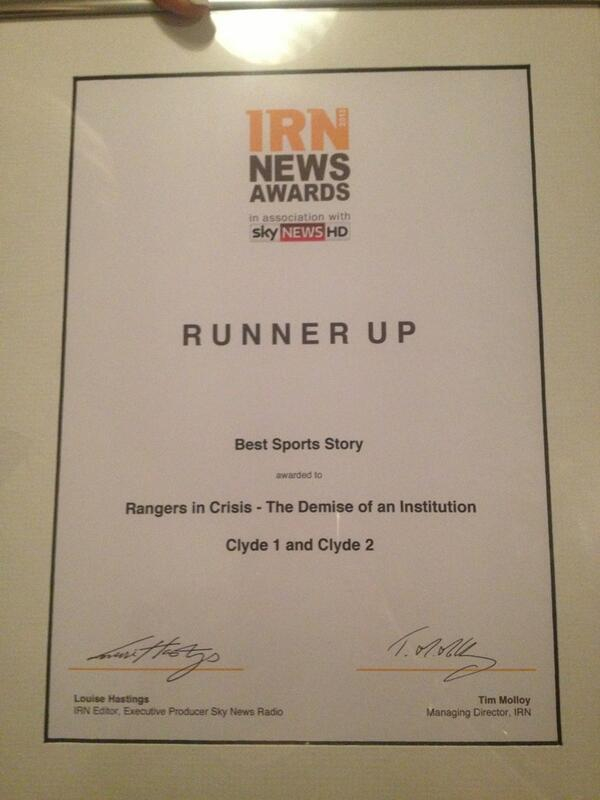 Note the name of the managing director. How on earth did he ever get a job in Scotland?

Mince also joined us on a lively podcast last night, which covered the main issues of the day, and is worth a listen , not least for the harrowing tale of Desi and his daughter when he met some huns-you’ll notice the use of the term-which is as convincing a reason never to let their club back into society, never mind the SPL,

The discussion also centred on the recent police harassment, and Dunfermlines administration, and is a better way to spend 45 minutes, than say sticking hot pins into your eyes or scraping the bits from between your toes and feeding them to the dog. Well, possibly not the latter.

Its on the site on the twitter bit, and we do apologise for the sound quality, but its worth turning it up and sticking with it.

Meanwhile, in deepest, darkest Kinning Park, all is not well. Alright , it never is, but even more so this morning. Neil Murray, the chief scout over there has been suspended pending investigation into some of his contract dealings, according to the Daily Record, which means he’s probably just in bother for parking in chuckies car park space. After all, there is no reason to suggest that at any time there would be anything even remotely dodgy about a contract entered into with Rangers. Or its offspring.

Also leaving the club is their physio “Orange?” Pip Yeates, who wants to spend more time on his own business.

Oddly enough, when Charles Green took over at Sheffield Utd, pretty much the same thing happened with the backroom staff. Is history repeating itself? Or is this just the norm when you take over a club with the aim of skedaddling with as much of the supporters money as possible?

Sorry, form a new club in this case, pretending to be the old one. The old one they bought the history off, which is the same one, or the same holding company , or something. Anyone who bought shares in that place really ought to have kept the receipt.

By the way, they closed yesterday at 70p. Which is what the fans bought them at. Can it be true the investors paid 20p, and Chuckles and his band just 1p?  The latter is, so he probably won’t be losing any sleep just yet. Even though sleep must be tricky hanging upside down from the rafters.

There is talk that John Daly, the Dundee Utd forward is keen to join them, but thats mostly from them, and Murray Davidson will consider his options as well.

Still spending money they haven’t got. do they never learn?

Dunfermline, as expected, and as discussed on last nights podcast (did I mention the podcast?) went into administration and almost immediately made several players, including captain Jordan MacMillan, redundant. Our pal Billy McBiggott reckons MacMillan could be the answer for Rangers, but only the lord knows what the question was.

Now, We at Etims are simple, farming folk, and don’t quite understand how all this works. The last time a club went into administration, Rangers (1872-2012) actually tried to buy a player, Daniel Cousin, which was blocked by the SPL. Surely Dunfermline are doing it all wrong?

Or could it just be that they have brought in a real, legitimate firm of administrators, and not just some pals of the owner…?

Never mind, because even as I type, some brave, crusading Scottish journalist is about to come up with the whole story. Some reporter, in the best traditions of  Woodward and Bernstein will soon see himself played in a movie by Daniel Day Lewis as he strives  to uncover the greatest sporting and financial scandal of the last fifty years! Dodging bullets-literally, probably-ignoring threats, getting someone else to open his mail, this guy is already hot on the trail of high rolling crooks who stung the taxpayer, fiddled the banks and fleeced hundreds of small businesses.

Oh look, I’ve just seen the Easter Bunny. What is in this coffee?

The odd one out yesterday was Regi Blinker, as he is the only one of the three to have played more than fifty games for Celtic. An astonishing fact, but not as astonishing as his preference for “big love” as outlined in one of several hilarious answers again yesterday. If you’ve not seen them all, go and have another look. Its funnier than this tripe.

Today, pick the one from these four, and why.

Jock Stein is the only one to have won the treble as manager?
Jimmy McGrory the only one who has never been at a european final with Celtic?
Neil Lennon the only Celtic Manager to receive bullets in the post?

Billy McNeill is the only one who managed Celtic twice.

Billy McNeill is the only one who lamped Gerry McNee

What a load of Gank about daly joining the darkside
he must be deluded.

What a nice way to round off Good Friday. It can be a bit depressing sometimes given the hammering that goes on around half two. I must confess, among other things not printable, I sneaked an odd smile here and there during my diary injection. I am now settling down in a corner over the weekend to listen to the football and to keep away from any lose boulders that might be hurtling down from the hills.

Happy bhoys Easter to everybody.

Neil Lennon is the only one who is not Scottish.

A happy Easter to everyone at ETims and beyond. Shalom, As-Salaamu alaykum, Shanthi, Peace be with you.