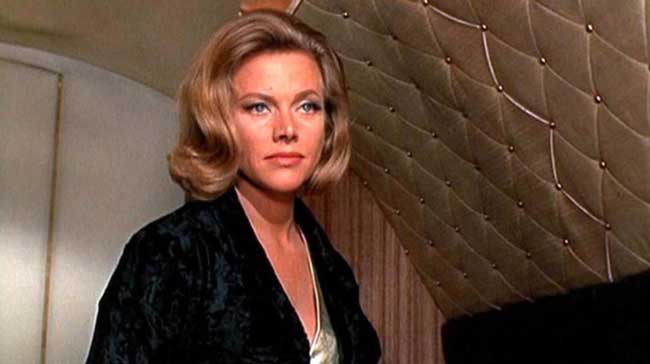 Its New Year so that means its time for the Etims Honours List.
Desi Mond presents our look back and salute to the great and good and bad and awful of the last 12 months.
Have a read and feel free to submit your own suggestions in the Comments section.

The Napoleon in Exile award
There were a few contenders for this one. We had poor Ned Flanders banned from Celtic Park for being a moany old hack. The Scottish Press tried to paint an imaginary distance between Aiden McGeady and Celtic fans when the Spartak player faced his old club but no-one was buying it. Another contender was poor Allan Thomson, well maybe not so poor after getting a nice “keep schtum” settlement on being given the sudden bump at Celtic. The winner however is poor wee Jim Traynor who felt so alone with his fellow ‘journalists’ that he decided to chuck it ( gettit!) and go join Rangers International Ltd.

The Prodigal Son  Award
This could have been a shoe-in for Aidenhino returning to Celtic Park but great work from ex Gers meant Aiden fell by the wayside.First of all we had brave Steven Naismith pleading for forgiveness and open-arms from the same Ibrox faithful that he abandoned so easily but the winner by a clear 50000 pounds, we mean miles, is Watty Smith who returned to Rangers and celebrating Chuck Green, the same giy he tried to oust so very very cheaply and embarrassingly

The Overhyped Sporting Moment
We could have said the Olympics, only £13 billion after all. We could have cited The Sports Personality of the Year Award…no Mo Farah or a Paralympian in top 3?…come on! We could have noted Andy Murray winning the Olympics and US Open but still not doing it wearing a Hibs top but we’ll let that pass. No the most overhyped Sporting moment was Media reaction to the Cup victory for plucky wee The Rangers against “Top of the Big League” Motherwell….it was a STUART MC CALL team at Ibrox for fuxake…say no more!

The Analyst of the Year
Some great Analysts spring to mind in 2012, we could salute the wonderful analyst work done by Skys John Collins during Celtic CL games or applaud the consisten work from Gordon Strachan at ITV who even went as far as complaining on air that Celtics achievements weren’t getting top billing over mediocre English teams. However all Analysts have been completely out-shaded this year by a new Kid on the Block. Step forward Steven Craigan, never has such a bad impression been made in such little time. How this biased blinkered banal balls-talker ever managed to convince both ESPN and the BBC to employ him is truly Nevinesque.

The Maya Soothsayer Award
We had a few crying our for this one, from Charles Green and his share sale expectations and that “The EPL would love us” remark that was soon countered by Peter Scudamore, to the calamity that was Craig Levein believing all would be okay for Scotland and his crazy attacking style but the clear winner had to be the Armaggedon doom merchants who prophesied a disastrous season. Well  it seems only Keith Jackson sees it that way while the rest of the actual football fans celebrate a very intriguing season indeed with more twist and turns than a Paddy McCourt dribble

The Transfer of the Season
We could go for Efe Ambrose or the brilliant loanee turned Permie in big Fraser. We could cite the transformation in Mikel Lustig and Kelvin Wilson. We could laugh at those brilliant 5 star tattoos out there that the Rangers International Ltd fans may soon wish were just transfers ( Dabbities surely – Ed) but we wont. We could cite all those ex Rangers Board memebers who went from Absent buffoons to brave front page visionaries following the tax case result but we wont. In our opinion, this award has to go to Niall McGinn;  To say the lhad done good since upping sticks to play for Victor Meldrews Aberdeen is an understatement and we wish him all the best

The Twitter of the Year
We could celebrate the Celtic Twitterati from Lenny through to Tony Hamilton but they know they get enough praise as it is. We could have included Mad Nacho Novo and various other crackpots Rangers International Ltd fans but we all know they are insignificant. We could have celebrated Rangers International Ltd signing up a Communications Director who made a carerr out of chastising any football fan who used social networking but all that fades in comparison to this infamous Tweet from ITV 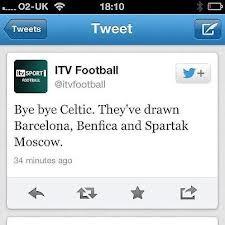 The Goal of the Year
Well where to start, we had Peter Lawwell reach his bonus goal thanks to Lenny and his boys brilliantly achieving their football targets with a league win and then Tony Watt scoring that goal against Barcelona. We had Chuck Green achieve his goal of kidding all of the we arra people all of the time even to the level of claiming his share goals were met when the figures showed otherwise. The winner however has to be that Allison goal for Stirling Albion against plucky minnows The Rangers. What an achievement, especially when Albion didnt even have their manager as he was away getting married at the time.

The Pass of the Year
We had some classic Passes this year, The pass for Iniestas silky goal against us in the Nou Camp springs to mind and of course Juan Insaurralde played a great pass to Gary Hooper to score against Spartak but the best pass of the season has to go to the fans of the Rangers International ltd share issue, to see so many millions pass up Charlies offer was a peach. They have a global fan base of 500 million you know!

The Penalty of the Year
Most people would immediately think of Kris Commons scoring that high pressure penalty against Spartak to seal the Last 16 placing in the Champions League and it was indeed a great penalty. Our prize however goes to Rangers International Ltd who took the Tranfers Embargo penalty imposed by the SFA until Sept 2013 and announced pre January Window, that they will simply find a way round it and employ the players in some other capacity to circumvent the signing penalty…classic!

The Lee McCulloch Over Enthusiastic Award of the Year
We had a late contender for this on from Kelvin Smith after his altercation with Dundee’s John Baird, an accidental clash that had Analyst of the Year Steven Craigan frothing at the mouth, but we had already decided that this one had to go to Steven Naismith on Scotland duty. This was the poor weak wee man with such bravery he elbowed Serbia’s Srdan Mijailovic a cracker and received a two match ban. Amazingly Naismith still managed to receive praise from his boss Craig Levein who heralded the Ibrox departee for being “very honest and professional” throughout the disciplinary process. Which was nice.

The Keith Jackson Award
This award goes to whatever story makes us go “NO F*CKING WAY!”. We had a few contenders, from being told Lenny was desperately wanting to go to EPL when he clearly said nothing of the sort, to Victor Wanyama being labelled as worth £25m when it was yet another attempt to twist Lennys words but the award has to go to the latest news that Chuck Green has told Sally he has a 10m signing warchest, sounds familiar, how many of those celebrated Euro 2012 star signing targets did they snap up again?

The Yeti Award
This award had a few contenders…we had the missing seats at Celtic Park…who would have thought they would have made such headlines, we had the mythical 10m warchest celebrated by Chuck in his embarrasing Xmas message, will even a tenth of it ever actually be seen let alone spent?, and of course we had a rare sighting of Paddy McCourt here and there. The winner though is the Stewart Regan-Neil Doncaster Beast, that mythical monster who was spotted around Mount Florida area a while back and now strangely havent been seen since.

The Kissinger Diplomacy Award
This award had votes for David Longmuir, a man who seemed to be the only one to come out the Sevco Debacle with any Administrator merit but after conjuring up various connections with Aston Villa, Arsenal, EPL, Dallas Cowboys, SFA, SPL, North American Orangemen, Dundee United and almost everyone else in between it just has to go to Charles Green, the man has such a quiet attitude to publicity too!

The Fan of the Year
We doff our caps to the SFL chairmen who stood by their fans wishes and rejected plans to parachute Sevco into the First Division. We applaud the Green Brigade, their 125 Years presentation and especially given their struggles with Scotlands Finest both home and away. We also salute all the brilliant Charity work performed by Celtic fans around the world but when it comes to naming someone worthy of the title “Fan A”, it has to be Charles Green, or Sally McCoist, or Jim Traynor, or David Leggatt…..(enough – Ed!)

No mention of Mr Custard?

Thank you for taking the time on a day when there is f**k all else to do 🙂
Brilliant stuff. What are you going to do with all those awards that went to The….. when there is no The….. next New Year? It must be said though that the choice must have been the most difficult in decades given the amount of first class plonkers you had to choose from.

Personal thanks for all your contributions throughout the year. I look forward to an even better 2013.

Happy New Year to you.

Excellent, but you do seem to like Kelvin Smith a bit too much for my liking ha ha.

Least we not forget ‘Sir’ craig radar whyte, who brought so much joy and laughter in 2012. Not to mention helping to expose the MSM for what they are. Without fear or favor, it was him who put the final sword through their bloodless hearts. A hero. HH

The Kissinger Diplomacy Award
This award had votes for David Longmuir, a man who seemed to be the only one to come out the Sevco Debacle with any Administrator merit?

Compared to the ombishambles(!) of Doncaster and Regan i dont suppose it was hard for Longmuir to appear to know what his actual role was and actually carry it out. The repeated appearances at Ibrox are a worry mind but not half as worrying as the potential change in set up….whjich Celtic voted for…time will tell

Yeah, it will. And I’m afraid of that impending reality being revealed. Quite simply because I don’t believe I could continue to support Celtic after that. The saddest of days.

Feel free to add him in…under comments..you can make up the award!