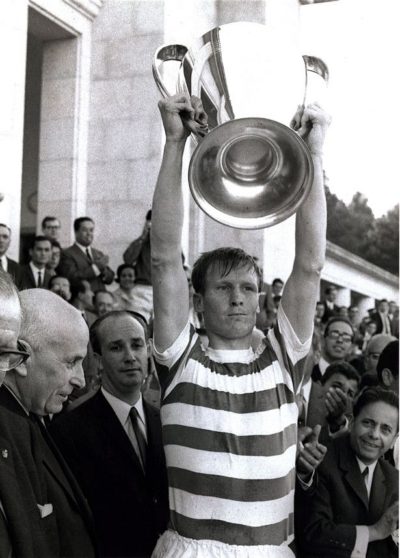 In part two of their memories of Lisbon, the Ottawa CSC takes us back to that joyful day of May 25th 1967. Enjoy.

We lived in Ballygrant, Islay, in a house called Glencairn.
I came from a very mixed (up) family. My father was from Islay; my mother from Maryhill. She was a fanatical Partick Thistle fan but, like so many of that generation, a genuine football fan as well. There were other branches of the family on the mainland, some from the dark side (football-wise). Thankfully, at an early age, I chose wisely.
Anyway, we didn’t have a TV. Such things were still seen as posh on the island. And expensive. Like many families, these things were out of reach for us. The plan was to get our tea done early, and listen to the game on the radio.
So, that’s how we started.
But then, Inter got a penalty. I was pretty upset. Well, as upset as a nine- year-old was allowed to be in those times. It was pretty clear from what I imagined, listening to the radio, that it was a bad call from the ref. It was a view that I held onto for several years, until I actually saw a video of the incident.
Unlike my mother, my father wasn’t a football fan, and was grumping at me for deducing a version of reality that I hadn’t witnessed with my own eyes. At that point, my mother declared that this was too stressful to ‘watch’ on the radio; so, three miles up the road we went to Aunty Chrissie’s place. She was the aunt who owned a TV set.
And that is where we watched the remainder of the game with half a dozen of us huddled round a wee black-and-white flickering screen. And then Tommy Gemmell scored that goal. The excitement got the better of me, and I ran out the front door and into the garden, shouting like a wee, mad man. (Editor: What else is new?) My grumpy father came out the house, grabbed me by the scruff of the neck, hauled me back inside, told me to behave or…
Now, I hadn’t seen much football on TV up until this point in my life. Maybe one or two games from the previous year’s World Cup….but until then, I had never seen a game on TV that I cared about. A few minutes later, the BBC showed a replay of Tommy Gemmell’s goal. Nine-years-old, I thought we had scored a second goal. Out the door… shouting… scruff of neck… threats… back inside (but still celebrating), only to be told it was a replay. On reflection, I think it took more time to get the video replays on the screen back then. Sickening, as it really had felt like a disallowed goal.
Then, Stevie Chalmers scored. Absolute mayhem. Cups of tea, biscuits and jam pieces knocked to the floor. Outside, I was shouting and dancing in Aunty Chrissie’s front garden, with my father this time.
Even back then, I knew it was a special moment. It changed all of our lives.
It wasn’t until many years later, that I had the opportunity to watch the game again. Even then, I was astounded by how good we were. I think many younger supporters in our club will get their first chance to see the video as our May 25th celebrations get underway. They are in for a treat. (Ronnie Campbell)

The image of Billy McNeil standing alone high up in the stadium majestically holding aloft the trophy to me is perfect; not only the most famous picture in our club’s history, but one of the most iconic football images ever.
I’ve been present at some of the most famous games in Celtic’s history: the 4-2 game in 1979, Love St, in 1986, beating St Johnstone and ‘stopping the 10’, Martin O’Neill’s first match against Rangers, the 6-2 game… I couldn’t name the starting elevens for Celtic in any of those games.
But, without even thinking about it, I can name the team that walked onto that park in Lisbon about 5.30pm on the 25th May 1967, a match I don’t remember watching. I don’t think I’m alone in that. (Jim O’Donnell)

Memories shared are memories to treasure,thank you for sharing your memories. H.H.

Jinky always said, that he never received a bad ball from Bobby Murdoch.
Big Jock said “If you want to win the European Cup, then this is the day and this is the place” 25th May 1967.

67 in the heat of Lisbon,
the fans came in their thousands,
to see the bhoys become,
ChAM PEE ONS.