The Season Book renewal forms are starting to fall through the letterboxes and here at Etims we have a worldwide exclusive.

The Season Book forms include a letter from Brendan Rodgers, our source behind the scenes raided the Celtic Park bins and retrieved his Original Draft. 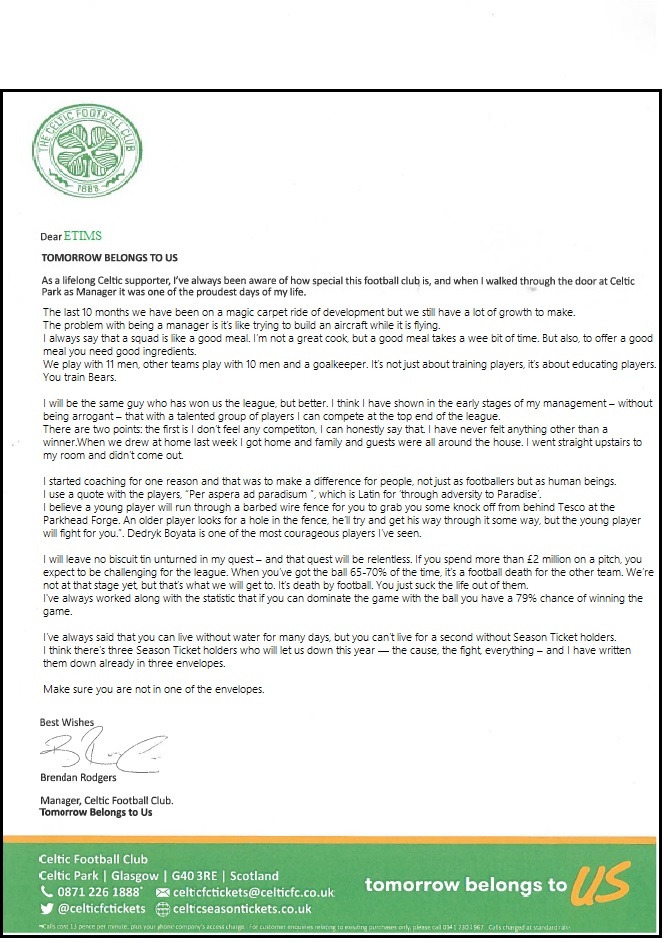 As a lifelong Celtic supporter, I’ve always been aware of how special this football club is and when I walked through the door at Celtic Park as Manager it was one the proudest days of my life

The last 10 months we have been on a magic carpet ride of development but we still have a lot of growth to make.

The problem with being a manager is it’s like trying to build an aircraft while it is flying.

I always say that a squad is like a good meal. I’m not a great cook, but a good meal takes a wee bit of time. But also, to offer a good meal you need good ingredients. We play with 11 men, other teams play with 10 men and a goalkeeper. It’s not just about training players, it’s about educating players. You train Bears.

I will be the same guy who has won us the league, but better. I think I have shown in the early stages of my management – without being arrogant – that with a talented group of players I can compete at the top end of the league.

There are two points: the first is I don’t feel any competiton, I can honestly say that. I have never felt anything other than a winner.When we drew at home last week I got home and family and guests were all around the house. I went straight upstairs to my room and didn’t come out.

I started coaching for one reason and that was to make a difference for people, not just as footballers but as human beings.

I use a quote with the players, “Per aspera ad paradisum “, which is Latin for ‘through adversity to Paradise’.

I believe a young player will run through a barbed wire fence for you to grab you some knock off from behind Tesco at the Parkhead Forge. An older player looks for a hole in the fence, he’ll try and get his way through it some way, but the young player will fight for you. Dedryk Boyata is one of the most courageous players I’ve seen.

I will leave no biscuit tin unturned in my quest – and that quest will be relentless. If you spend more than £2 million on a pitch, you expect to be challenging for the league. When you’ve got the ball 65-70% of the time, it’s a football death for the other team. We’re not at that stage yet, but that’s what we will get to. It’s death by football. You just suck the life out of them. I’ve always worked along with the statistic that if you can dominate the game with the ball you have a 79% chance of winning the game.

I’ve always said that you can live without water for many days, but you can’t live for a second without season ticket holders.

I think there’s three Season Ticket holders who will let us down this year — the cause, the fight, everything – and I have written them down already in these three envelopes.

Make sure you are not in one of the envelopes.

The actual renewal Letter sent to Supporters ended up looking like this: 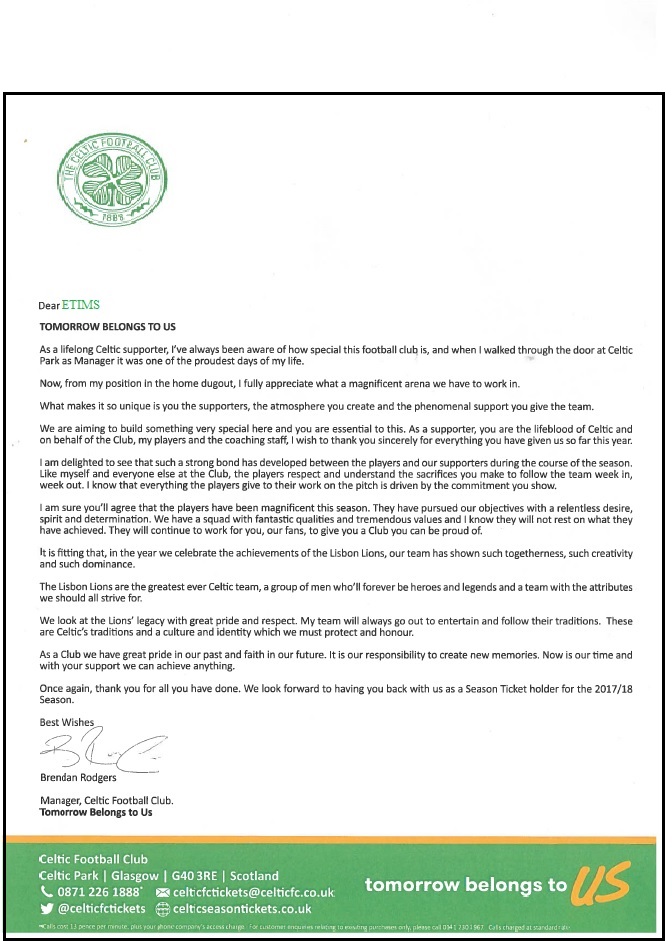 Brendan Rodgers, A Celtic supporter, immersed in the History, Traditions and Philosophy of our club.
Intelligent, Eloquent, Brave, a top, top fitba. Manager, motivator, tactician and Life Coach.
A hero to us all, destined to be a club Legend.

How come they cnuts get 3 home games and we get two…?
Anybody know.

Every trick in the book.

Here`s my prediction for the split sevconians;

They`ll no win a game if and only if the players are bloo based drugs free.

Yep – they need the money and the SPL are helping them

its the HunaLot Lottery when it comes to that Wee Diddy Team Fae Ra Peepul.Way oor Clyde Way.They need awra Help they can muster.Look on the Bright Side,That couldve been us in that Predicament BUT We Are Not Tax Dodging Cheating HunZzz.So gee thum an extra home game,They need aw the help they cAN get.Big Issue Springs tae mind.See King lugged the deadline day.Admin should be on its Wayyyyyyyy

Long shot here but would yous know of two spare seats on buses going from the north of Ireland to the semi final. Have our tickets but our lift fell through. Thanks ☘☘

Is the rumour true that the sevconians have splashed out for an outdoor setting?

They`re on the drive again.

Stay away from the Cadbury cremes in the soup.

Savoy crackers,gherkin,cheese,beetroot and a touch of ham.

Piece and jam in the morning fellow beings.

Only across the road,you lucky bassas.

It is the first time since the panel was granted enforcement powers more than a decade ago that it has taken such action.

I wrote yesterday there was more to this than first meets the eye and here it is:

‘Investigators were still not clear about what kind of attacker might have wished to frame Islamists for an attack, but said the explosives used in the attack were professionally-made.’

If they’re really looking into’right wing groups’, why not look a bit further up the chain to the guys who actually run this war show, the CIA?

After all, they didn’t go to all that bother of creating, arming & funding Al Qaeda, ISIS, ISIL, the Taliban etc, etc, for nothing you know.

‘The war will be endless and the enemy unseen” – George Orwell