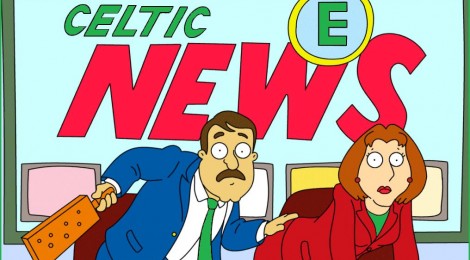 Desi Mond / September 6, 2012 / 1 Comment / Diary
Thursday September 6
It seems that Celtic almost landed a midfielder during the last window, Maor Melikson as Neil Lennon continued his quest to bring in players its easy to make up songs for.
“We’re watching Sellick , son, because of Maor Meliksson”
Look, Hal David died last week, and I heard Burt Bacharach reads this, so you never know.
The Israeli midfielder plays for, and still does, Wisla Krakow, a team which those of us old enough to remember try to forget. His agent, a chap called Dudu Dahan, commiserated with his man, and offered this advice  “He must be a man and not act like a rabbit or a chicken.”

He went on to say that Melikson didn’t play at the weekend because he has a bad back, and not because he was at home reading pamphlets on “things to do in Glasgow.”
This is what happens when you leave it late to do business and offer £1,25m for players these days. All very good if it comes off, but now the guy is on everyone elses radar, and if he is as good as Lennon thinks, he claims to have watched him for some time, then the chance to snap him up could be gone.
One who did join up, Miku, has revealed he turned down a couple of English clubs to come to Celtic. Swansea and Reading were both keen, but he was sold on the idea of playing for a big team , especially in the Champions League. saying that he “felt that if I was to go to another team and another country , it would have to be a really big one.”
At last, someone who recognises that top level competition with a big club is better than a relegation battle and high wages.
Miku also hints that he would stay for longer than a year if all goes well…
One of the youngsters who impressed in the Hibs game, Jackson Irvine, has spoken of his delight with his debut and upcoming opportunities. The packed fixture list means he thinks “there’s going to be a lot of chances for us to continue to impress”
The key thing here is the way he looks at the season. He is expecting to play, and has obviously been told he will. That gives everyone at that level a lift, because they know they are working towards something. an interesting comparison with an interview I recall with Stephen MacManus, who under Martin O’Neill spoke in the Celtic View about having to leave to get a chance to further his career.
Then he got a chance, and had to move to further his career.
Irvine and his generation though, will be competing at a higher level in the NextGen series, starting to tonight at Firhill, and again , it is indicative of how far youth development has come since the days of running round Barrowfield in pit boots and donkey jackets.
Just because he isn’t at Rangers anymore hasn’t stopped him talking nonsense. In a desperate bid to keep himself in the public eye while he tries to find work, Alex MacLeish has revealed he nearly signed Victor Wanyama and a number of other great prospects while at Birmingham or Villa.
What is glaringly obvious here, and potential employers should take note, is that he didn’t sign any of them, and therefore he is out of work.
Over at Third division minnows Rangers, manager Ally McCoist has hit back at snipers who claim his big name signings, such as Ian “Blackie” Black and David “Temps” Templeton (you know they are accepted when they get nicknames) have only come for the money. He’s right. Their impending second administration means they’ll be lucky to get paid after Christmas anyway. (of course, we use the term “big name signings” in the loosest possible sense of the phrase)
McCoist also comes out with another excellent example of Orwellian doublespeak with this statement:  “Listen, we are where we are. We’ve always said we’d accept it. The fans wanted it, the fans have got it and the support they have shown has been remarkable”
It is remarkable. Despite their club being run into the ground, cheating the system, not paying creditors and signing Ian black, the loyal support have shown absolutely no sign of trying to find out what happened, who caused it and seeking any form of punishment. Remarkable by any way of looking at it.
Now, as the club prepare for a share issue, they will be asked to dip into their pockets, and this time they probably will, while those responsible ride off into the sunset, pockets bulging.
You can almost feel sorry for them. Almost.
But there could be good news around the corner for them, as Portuguese superstar Christian Ronaldo has said he doesn’t want to play in Europe anymore….
Michael  Owen is fretting over his move to Stoke. Apparently there is a chance he might actually have to play in a game.
newest oldest most voted
Pensionerbhoy

I am getting later and later onto the internet, Desi, so apologies for the late comment. Not as funny as you usually are but I accept there are subjects that would stifle anyone’s sense of humour. I did enjoy your McManus and McLeish references, mind.