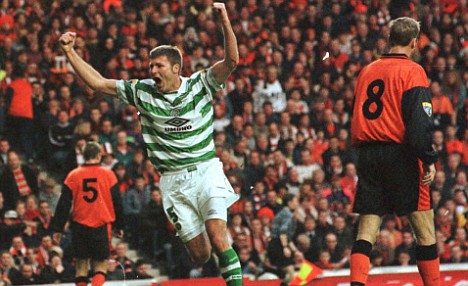 I wish I could say those good fellows at ETims Towers politely asked me to jot a few words down about Celtic and Denmark, but the truth of the matter is, after several threatening direct messages on Twitter they finally made me an offer I couldn’t refuse (lifetime supply of laxatives works a treat – Ed!), so here goes.

Some years ago I moved to Denmark on a free transfer – free transfer meaning Brian Laudrup paid for my air ticket. Why he did that is a story of intrigue, a story of sex and a story of Gazza beats one, Gazza beats two, Gazza beats Sh…nope can’t go there!…and I can’t say more than that. Like any life changing decision that gets made in a matter of hours, things went a bit awry so a planned 6 months in Scandinavia is creeping up on 20 years, so I feel I can comment a bit on Denmark and Celtic.

Scotland has a lot to learn from a country like Denmark when it comes to getting people of both sexes involved in the beautiful game. The facilities for playing football here are light years ahead of what we have in Scotland. There are well maintained pitches for public use, even in the smallest villages and it’s the norm for the smaller towns to provide floodlit Astroturf turf pitches for all year use. Many amateur clubs have teams from under 6 level all the way up to old boys level. Give the people the facilities and the right organisation and people want to be involved. Denmark are no pushover on the international scene and although they’re going through a tough period at present, the next generation of football players are out there right now kicking a ball with their feet instead of a games console. Our SFA needs to be looking at Scandinavia for inspiration if they want to encourage kids to play football and enjoy it.

Celtic through the years has had their fair share of exposure in Denmark.

Rieper, Weighorst, Laursen, Gravesen and Rasmussen have all drawn column space over here. Rieper (Pictured above) a Celtic hero, for helping stop the 10, played for Denmark in the 2008 WC only to lose 3-2 to Brazil in the quarter finals. He was highly rated and Celtic was credited for giving him a more determined edge to his international game. Unfortunately his career was cut short by a foot injury soon after. 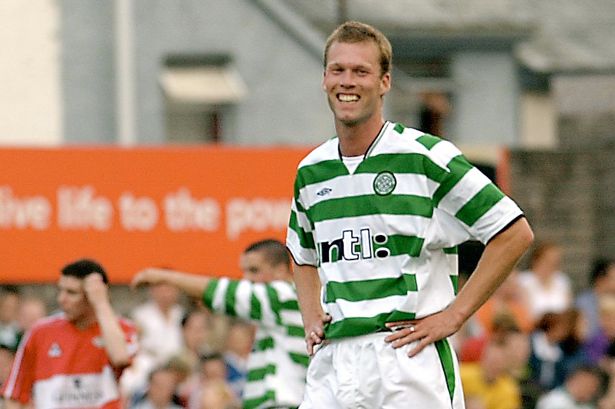 Morten Weighorst fought for his life, left Celtic with our love in his heart and returned to Brøndby to become a hero for their fans. Elected Danish player of the year on his return, he accepted his award at the televised event dressed in full highland regalia with Celtic FC tartan kilt. When asked by the media why he sang the praises of the club who stood by him and his family when he was extremely ill. Morten can be frequently seen in a certain Irish bar in Copenhagen watching Celtic games on the big screen.

Ulrik Laursen never made a great impression at Celtic and by default the Danes weren’t overly interested in him.

Thomas Gravesen was a bit of a joke figure in Denmark after he moved to Real Madrid, but it also shows the Danish media are as fickle as our own. Hugely popular while at Everton, he was well out of his depth in Spain and the Danish media hyped up the criticism he was getting from the Spanish fans and press. It was a big story when he arrived at Paradise but his international performances reflected his poor Celtic form and he is probably best remembered for scoring twice against Rangers (Rest in Peace) and his porn star girlfriend Kira Eggers!

Morten ‘Duncan’ Rasmussen’s transfer from Brøndby was a big story in Denmark. The biggest rivalry in Danish football is between FC Copenhagen and Brøndby and they were losing their best striker. Does anyone really know what went wrong for him at our club? It was a move that most Celtic fans here were really excited about but he was never fancied by Neil Lennon and returned to Denmark. He changed clubs a few times and became a part of the same championship winning team as Erik Sviatchenko. This season he scored 13 goals in 23 games to win the Danish Superliga and the previous campaign netted 15 goals in 30 games. I still believe we lost out on a player there.

So that’s it from Denmark. A short and sweet history of our involvement with Danish Celts and hopefully we are on the verge of a new blossoming romance with the arrival of Erik Sviatchenko.

They do a decent bacon roll though!

Thoroughly interesting and enjoyable read. The comparisons are intriguing but the disparities are eye opening, especially the ongoing support for “grass roots” and amateur football. I can remember similar support here in Scotland with some form of public football pitches, including flattened blaze bings, acceptable in their day, and football matches at all levels and ages, in spite of the Scottish Calvanistic legislation that made Sunday a sports “no-no” day. T.V. football would have well and truly Sky-dived in those days. Saturday 3pm only? Phew!! “I cannot believe it!”

Pensionerbhoy,
If you could change two things about modern day football, what would they be?

I would like to see football on terrestrial television available for all. With regional programming preventing the local teams games being televised for home matches. For example if you lived in Dundee your terrestrial TV would never show Dundee or Dundee Utd home games. Could either go to the games or pay the same price as a seat for pay per view.
All remaining plots of land within town and city limits that organized sport can be played open in Scotland should be declared a wild life refuge for all our wild youngsters to play fitba on.

@PB We used to play in the Paisley District League both at Boys and Senior Level and I have to say I hated red blaze pitches coming from Rothesay where we had one of the biggest pitches in Scotland that had drainage installed when it was converted from the Old Black ash pitch previous.
Black ash … wire brush and detol job after you put a slide tackle in not nice lol.
Anyway I digress we had 4 full sized pitches to choose from on the Island and they were well maintained and this I think was the reason why so many of us chose Football as a Sport even though we also had Rugby and Shinty in competition.
If the facilities are there the kids will play it’s as simple as that we played in all weathers and if it was to wet well you simply played on the Street up the scheme.

What about Bent Martin.

Good article thanks Exiled Bhoy. Hopefully our new Dane can match the impact of Marc and Morten!

Interesting read I have to say I like the look of Erik though I have only watched some videos he looks a fairly decent ball playing defender who can add a few goals on set pieces which is always a bonus.
Time will tell of course but I think Mulgews days may be numbered now with his arrival in defence.

Charlie Saiz
I played for nearly 20 years man & boy in Paisley and over 90% of the pitches were grass.Glasgow teams used to say they loved playing at Paisley because of the pitches there.

Tex Paisley and District League encompassed a large area we (Rothesay)used to play teams from Paisley-(Athurlie) Pollock Greenock etc.
Can remember playing a Summer tournament in Paisley at a Park with numerous pitches (grass) in the 80’s at U16 Level?

Yeah good read,agree about Rasmussen looked like a player.