With the transfer window only open just a few hours, new Motherwell signing Steven McLean joined the club too late to play against Celtic, and was forced instead to operate as referee. clearly lacking in basic knowledge of the rules, he nonetheless put on an almost matchwinning performance for the Steelmen, only to be thwarted by this fantastic save by England keeper (copyright Sky Sports News) Fraser Forster 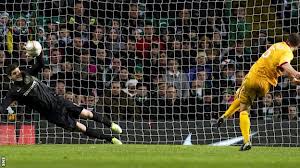 Then , Celtic ran up the park and Gary Hooper scored the only goal in a 1-0 going on ten victory. The leading pic at the top of the page shows the ball clearly not “placed on the penalty mark” as it says in the rules, and Forster was booked for pointing this out. Victor Wanyama was booked for pointing out that Motherwells Jamie Murphy had dived for the award in the first place, and a couple of other Celts were cautioned for running too fast.

When Rangers died, there was always a gap waiting to be filled by another team to win that special place in our hearts, and indeed many of us thought that Hearts would be that club.

But Motherwell, under a man who was actually one of the more likeable players at the old Rangers, have come storming through to tke the No.1 spot in hundom. They kick, punch, cheat and closed down Tullys, once a fine bar in the Lanarkshire town.

Thats Celtic a massive nine points clear going into the two week break, and Gary Parker was forced to do the post match interviews for TV as everyone else sodded off down the pub to read the papers and the message boards to see where they will be earning their crust at the end of the month.

Beram Kayal is wanted by Norwich, and while it would make sense to cash in on the Israeli before he gets his annual springtime injury, there remains a feeling that his guile and energy would be useful in the latter stages of Europe. £5m has been quoted, and Kayal must be disappointed that its by a team he probably hasn’t heard of.

Or was Norwich boss Chris Hughton, at the game yesterday, there to cast his eye over Gary Hooper. you can’t fault his ambition if he was. Anyway, Gary Parker expects Hooper to still be at Celtic at the end of the month. He’s nicked his car keys.

Kelvin wilson, the man who watched the motherwell forward try to emulate that bloke who fell out of a space capsule reckons it was a penalty. Of course, this could well be an elaborate bluff as the Englishman faces a voilent conduct charge for his elbow on Ian Baird on today. His honesty may well be his main defence, but if the panel he stands in front of all have surnames for first names, he might as well bring his own rope.

Rami Gershon is moving closer to Celtic, now a loan deal is mentioned, a fee of £800,000 and he has the same agent as Kayal and Ambrose… The left sided centr half could provide cover for Efe ambrose, who will be away to the Africa cup of Nations, which is being held in Africa. (Ed-can you not check these things?)

Aiden McGeady back in Glasgow-Mikael Lustig off to Russia? Twitter, facebook and other sites have mentioned this, so I won’t. Craig Leveins Scotland choices, Graeme Dorrans and that Snodgrass bloke are also on the move. Thankfully, Celtic are taking a week off and then flying out to spain to a training camp. Hopefully these palayers will have found clubs before Lennon gets back, and don’t get me started on Mikael Silvestre.

Miku wasn’t on the bench again yesterday, and he and Mo Bangura might not be on it ever again, whilst alex Ferguson was seen dressed as a waiter when Vic Wanyama went for a meal last night. Newcastle are set to lose Dember Ba, and so alan Pardew might start another of his “Scottish football is shite”  rants as he tries to replce him with Gary Hooper.

Well, Scottish football might be shite, but the English Superleague only has one more team than the SPL in the UCL…

The quiz was mysteriously forgotten yesterday, and thirty goals during the run to Seville is still a club European best. Nearly all the goals were scored against Suduva, except the ones that weren’t.

The winter break is now upon us. how many competitive games have Celtic played thus far this season? (This will surprise you).

Oh, and don’t say “four” or something like that. I mean official competitive games. Not ones the players have actually tried in. In which case four wouldn’t be far off…

Finally, spare a thought for all those Rangers fans who didn’t celebrate the New Year. Apparently its just a continuation of the old one.

correction 35 games, scottish cup replay against arbroath,Easy to forget that one, It was sh..e.

Think it’s 35 so far. Btw is your last line re sevco designed to poke a stick at a certain visitor to the site (you know who you are)? If so, good, could do with another right good laugh now the festivities are over 😉

and a happy 34th of december to all our sevco visitors

So predictable wasnt it.

Great diary today. You definitely go on a role when doing transfer windows. Do you have ladders and a shammy by any chance? You are too good to not have had a lot of practice. I hope you are not the one peeking through our bedroom window every Thursday? The wife thinks you are ugly, if it is you. I reserve my judgement as I really love our pet monkey 🙂

Is our perennial lover bhoy Robbie hiding in the bushes in the car park at the new velodrome? His wee “big head” has not peeped out yet and I have not heard his cries from the womb this year about his love of Celtic . Of course, silly me, he is just waiting for his market price to rise or is rejected by all English clubs – in any division. Hey, maybe, just maybe there is a Scottish team, in any division, that will pay the big bucks he wants. Guess he will have to take elocution lessons, deny his birthplace and become naturalised first, though. The later could keep him out all season. I have heard you can hardly walk for months after the operation.

Anyway, I will wait for the MSM transfer lists. I sure aint gonna rely on your daft predictions. I only deal in FACTS. Sorry, maybe your list is not that daft after all :).

Keep up the great work. It would not be hard to pick out the ETims followers on the tube. They are the ones on their laptops laughing their heads off at 6 in the morning, the only ones!

“Finally, spare a thought for all those Rangers fans who didn’t celebrate the New Year. Apparently its just a continuation of the old one.”

Come on, there isn’t a comedian in the country that would not give his eye teeth for that one. No sorry, I forgot about Charlie and Ally.

Quiz: I make it 37. I have not counted any of the friendly games even though some could certainly be classed as competitive. If YOU are, then I make it around 46. I have run out of fingers so you’re not getting any more than that.

And stop knickin my shite jokes :-<

I love it when Pensionerbhoy , checks that his posts have been successful . After Xmas and new Year and my first day back at work it’s nice to get bacxk to reality.

Can It just say that they continuation of the old year joke is pretty good !Have used it on a Sevco mate today and got the usual curt retort !

Mo Bangura’s still at the club? Next thing you’ll tell me is Du Wei is as well.

Btw: More pictures of Honor Blackman please. The misses is off to Holland for a week …

waiting fro Friday’s diary – where is it Ralph ?

Just cannae get the staff…see if he plays the “I had to work card one more time!”..
Apols
Etims Complaints Dept