By Jack the Lad

Celtic stretched their lead over Aberdeen at the top of the table to seven points after a resounding win over the Dons at Celtic Park.

A Leigh Griffiths double followed by a James Forrest strike ensured a 3-1 win for the Hoops, although the scoreline flattered Derek McInnes’ side.

Tom Rogic returned to the starting eleven after an impressive performance from the bench at Tynecastle, while promising youngster Kieran Tierney replaced Izaguirre at left back.

Having been beaten by the Dandies at Pittodrie back in September,  Deila’s men were hell bent on gaining revenge.

The early stages of the game were dominated by the Hoops, but the Dons looked just as dangerous on the counter.

Indeed, it took an outstanding last ditch Jozo Simunovic interception to deny ex Celt Niall McGinn the chance to bear down on the Celtic goal on the 20 minute mark.

Celtic responded through Forrest moments later, who cut inside Logan and had his driven shot from distance narrowly deflected wide.

With half an hour gone, the Bhoys created their best chance of the game. A Kris Commons knock down managed to find Griffiths 6 yards out. With the fans already celebrating a goal, Danny Ward in the Aberdeen goal thwarted the Scotland international with a stunning save to tip the ball wide for a corner.

Aberdeen should’ve had the lead only a minute later, as McInnes’ side created their best chance of the game. An excellent cross from

Johnny Hayes found Rooney in acres of space, but his header could only flash wide of Gordon’s goal. A lucky escape.

Celtic were gifted two clear goalscoring opportunities moments later after a lapse in the Dons’ defence.

Dedryck Boyata had his free header from a corner cleared off the line, while Griffiths skied the ball from a relatively simple position after being fed through by Lustig.

You would’ve been forgiven for thinking Griffiths had been replaced by a disguised Amido Balde as some sort of cruel halloween joke.

However, on the stroke of half time, it was Griffiths who gave Celtic the lead. 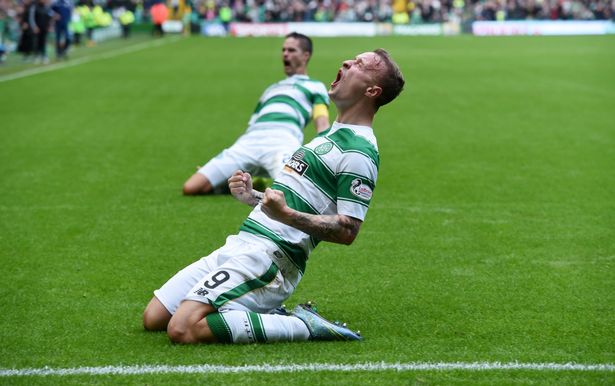 A world class cross from the ever impressive Tierney found its way to the head of Griffiths, who rose above Ash Taylor and guided the ball past Ward in the Aberdeen goal. He’ll be having nightmares about that one for a while. Excuse the poor Halloween puns.

The Celts started the second half strongly as they looked the put the Sheep to the sword. After what can only be described as an Efe Ambrose-esque tackle, Deila’s men were able to do just that.

Taylor, clearly looking to emulate the Nigerian powerhouse’s Balon D’or winning performances of the past year, hacked down Commons in the box when it appeared he had no where to go.

Griffiths stepped up, and finished emphatically for his sixteenth of the season and Celtic’s second of the day. I though this ‘title race’ was meant to be tough?

It was only ten minutes later when the Bhoys added a third. The outstanding Tom Rogic beat his man and picked out the advancing Forrest, who in turn flicked the ball past the Dons’ centre half and slotted the ball home as a motionless Ward watched on.

Deila’s men kept up the pressure as they searched for a fourth goal. Griffiths’ fizzing effort after 70 minutes forced a smart save from Ward to tip over, while Stuart Armstrong, just on as a sub, should have had two after a couple of excellent chances, one of which was saved and the other went over the bar.

It was the Dons, however, who grabbed the next goal. The continuing trend of conceding from set pieces once again became our undoing, as a quick free kick caught out the Celtic defence, who had left an unmarked Adam Rooney free to nod home from inside the box late on.

At that, the fat lady sang and it was the team from Glasgow who went home with the three points.

I think I speak for most fans when I say that today’s performance was one of our best of the season. Some outstanding passing football was played, to which Aberdeen had no answer. The gulf in quality between the two teams was there for all to see, and in truth, the scoreline was somewhat flattering for McInnes and his side.

The continued improvement in Griffiths, Rogic and Tierney were positives in what was essentially a stroll in the park, with the only blip being some despicable defending from deadball situations. It’s becoming a bit of a recurring theme, surely someone at Lennoxtown has to sort it out?

Overall, a great day for the Hoops. Six points clear after only a few weeks ago we were four behind. What was more important was the manner of the win, which will surely boost confidence ahead of Thursday’s crunch Europa League fixture against Molde. Believe it or not, it’s a bloody 6.05pm kick off time. Get thinking about excuses to leave the work early now.

More myth abour Efe , we have never seen efe put in as bad a tackle like the one Taylor did.
Efe has made mistakes but I repeat not one as ridiculous as Taylor’s yesterday

It would be best if Efe left , to please some in our support and for Efe’s career . Its bad enough our media ridiculing him , let alone our support’s web sites.

Worse still when The Sheep supporters singing his name when he came on. I agree time for the off Effe.

Jvr Ambrose has been a good servant to Celtic over the years . He has made mistakes , as has every other defender in his time with Celtic .
Some of our so called fans cannot refer to themselves as supporters as they certainly make no attempt to support Ambrose . These people prefer to try to demonstrate how clever they are by making smartarse comments about Ambrose

Jvr; I don’t think you can say Efe has never made a mistake as ridiculous as the one Taylor made. At Pittodrie earlier in the season, he gave away a penalty which was similar to the one yesterday in that the forward was going no where. Not to mention the Fenerbahce mistake.

Damian; I agree that Efe gets too much stick and is often used as a scapegoat when so called fan favourites are more culpable. I like Efe as a player, he’s great technically but often just lacks concentration and positional awareness. I will always back our players given they put effort in, which Efe does and I think the criticism of him is unwarranted, but for you to suggest that someone isn’t a supporter of a club because they criticise a player is ludicrous. The comment was meant as a light hearted joke, nothing more.

Damian,
Ambrose is shite, he is a liability and should never be given a shirt again, put it another way….he costs the club!
If you want to get all fluffy and make daisy chains for Efe then on you go….but he will still trip over the daisy chain.

with ambrose in the team celtic could lose to anybody

Effe got tremendous support from GB when he came onto the park yesterday. I just feel that a team with Celtic’s ambition cannot afford to keep a player who no matter how well he plays during a game is a ticking time bomb.We need solid performers in every position of we are to maintain a European run this season .

Dan,
Exactly, he creates nervous tension in the defence and in the stands.
Taxi!

Jvr; I don’t think you can say Efe has never made a mistake as ridiculous as Taylor. At Pittodrie this season he gave away a penalty similar to the one yesterday in that the attacker had nowhere to go. Then there’s the Fenerbahce mistake… Believe it or not I actually think he’s better than Boyata. The comment was a bit of a joke about him, it wasn’t meant as an insult.

Damian; I agree that Efe makes mistakes like the rest. I like Efe, he’s technically very good but he just lacks concentration and positional awareness. However, he’s often used as a scapegoat when other so called fan favourites are more to blame. I’ll always support players as long as they put the effort in, which Efe does, but for you to say someone isnt a true supporter of a club for criticising a player is ridiculous. The comment was a lighthearted joke, nothing more.

Does anyone know if the Blackett loan deal has an appearance clause?

Yeah,
The clause is he doesn’t appear!

Efe is a good pro has served Celtic well and deserves all the support he can get.
However I think his days are numbered now and we need to look forward.
Bring back O’Connell in Jan give him a run of games.
He’s looked fairly solid I think given his inexperience.
1 start at Oldham (at RB) fuck me he could have stayed at Celtic and played more games.

So you have been advocating a settled defence as key to Celtic’s improved consistency under Deila?
Yet you want O’Connell to come into the side in January, in place of who?
Simunovic? Boyata?

So we play Simunovic and Boyata up to January, then replace one of them with O’Connell?

You play whoever is in form and can hold onto the jersey Monti.
O’Connell is not a bad defender he like others on the fringes needs game time.
Alot has been said (rightly so) about the emergence of Tierney and form of Rogic?
Well if we never bit the bullet and gave them a wee run of games then I severely doubt we would be praising them these past few weeks.
I think Efe’s days are numbered now so Common sense decrees O’Connell should be moved up a rung to the first team to see what he has got to offer.
If not what is the point of having and running a Development squad?

Got to agree bout Ambrose, I’ve stuck up for him in the past and desperately wanted him to be a success because i think there’s a good player if he could cut out the daft mistakes but enough is enough. Don’t think he’s ever recovered from the Juve game tbh. Really impressed by Rogic who has a wonderful first touch, good quick feet and an eye for a pass. Both him and Biton look classy elegant midfielders. Hail x2

Poor Efe. I think Mulgrew is a better central defender but we’re pretty thin in that department. I’d hang on to Efe for now. He’s played very well for us but not consistently. He needs used sparingly. Not a ticking time bomb but one that has exploded. He is good enough for our domestic game so could be a squad player for the rest of the season then he can go in June.

I agree and I suspect that conversation may have taken place between the coaches already Devoy.

The only conversation the coaches should have is drop him for good,one of his first touches sat was to pass the ball to an aberdeen player ,the way we play with the full backs pushing on leaves us open to stray passes causing problems for us,if a man cannot pass the ball 10 yards he should not be playing at this level,and for his defending,or should i say lack of it.

So should Commons be dropped for the same thing on Satuday?
His fist touch was brutal first half.