All You Need To Know About Qarabag 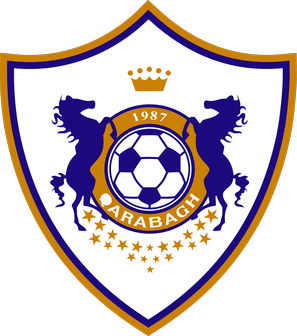 BakuPatrick, our man in the East, gives us the lowdown on Qarabag, our next European opponents….

Qarabag have an identity within Azerbaijan culture which transcends football culture and makes them every supporters second team. Displaced to Baku following the invasion and destruction of their homeland Nagorno Karabakh, which resulted in 30,000 deaths, (mainly men and boys) The Horsemen as they are called have a fiercely loyal support but are also seen as a symbol of resistance against unjust occupation by Armenia.

They had a fairly mundane life in the league until the appointment of former professional player Gurban Gurbanov in 2008 who radically changed the make up of the playing staff. He insisted that the back bone of the team squad would be predominantly made up of home grown Azeri nationals balanced with a sprinkling of foreign players who would add value to the naturally robust talents of the locals

He set a pattern of play that would be strictly adhered to of 4-2-3-1 and set about changing the style of play to fast moving on the ground moving up and down the pitch as a unit attractive football. Ronnie, sorry Gurbanov and Qarabag won the league for the first time in 21 years in 2014.

I watched them in Europe in 2014 and saw them beat Red Bull Sazsburg, Dnipro (eventual finalists) and be cruelly robbed against Inter Milan when a 94th minute winner was disallowed. Replay showed that it was a perfectly good goal. Qarabag fans were convinced of the conspiracy that no one wanted a small provincial club from one of the smallest leagues in Europe to defeat the Princes of the game. The parallels are uncanny.

The current squad consists of 4 Brazilians, Spaniard, Dutchman, Moroccan, Bosnian and the rest Azeris. The main thrust of attack tends to be down the left side of play to Brazilian mid-fielder Richard and then looking for another Brazilian centre forward Reynaldo in and around the box.

Gara Garayev  and Joshgun Diniev are two Azeri defensive midfielders and can put it about when required to break up play.

Defensively they are very strong and are not frightened to put a foot in when necessary although they can be a theatrical in response to challenge. Bosnian Goalkeeper Sehic is a fine shot stopper but has the odd wobble moment which can install panic at the back. He is particularly susceptible to upset against a robust forward at crosses.

The back four also like time on the ball and again can be upset by being closed down quickly. The whole team can be prone to switching off for 5 or 10 minutes and then finishing the game strongly.

So much for Qarabag, the similarities of a rich history, being a peoples club supported by a displaced diaspora, a young ambitious manager playing an attractive style of play, filled with predominantly local players. What’s not to like. The local fans are excited by the draw as they feel they are facing one of the most famous clubs in the world and that they are in with a great chance of progress. Make no mistake they feel they can beat us over two legs. They normally play a similar style home or away and they are confident they will get a goal at Parkhead.

We will need to be at the top of our game and take our chances as they come. Brown and Bitton will be crucial in imposing themselves in midfield and we must be wary of their speed in breaking. My only concern would be the left back position and I would choose Izaguirre over Mulgrew. But then I don’t pick the team.

Baku is the heart of the oil and gas industry in the Caspian with its very own local Celtic Club who cannot believe our luck at getting to see our beloved club in competitive action. Hopefully after the first leg it will be an exhibition game.

Excellent insight into a Club that many of us have barely heard of.
Their exploits in Europe last season are to be applauded…
But lets hope we get the plaudits this time.
Onwards and upwards Celtic.
HH

Great insight going off the above I would start with Ciftci and Izzy and look to hit the keeper early on and hope to unsettle them as quickly as possible.
We have pace at the back and pace going forward which should trouble them more than us.
Clean sheet and perhaps score 2 or 3 and it could be job done.
My emphasis this week would be on the back 4 they have to get into their heads that this is a dangerous team and therefore full concentration from the off.

On reading the first few paragraphs, i like the spirit of this outfit!

Izaguirrie would be number one pick if playing at his best, but his current running about like a headless chicken won’t cut it.

Others have mentioned it and I’ll repeat it…
Our defence needs discipline and concentration…especially big Virgil.
He’s far too casual at times and overdoes the “fancy Dan” stuff…and it sometimes spreads to the others.
Its the one area that really concerns me…
Keep it tight and keep it simple at the back lads…

Baku Patrick. Thanks for that update. You say that they fancy their chances but if you were a neutral what would you say our chances are realistically if both teams field their top side and both play to the best of their abilities? A lot of variables,I know.

Sportsmanship and respect to your insight but I don’t share your arguments.

After years and years of evil murdering and slaughtering Armenians by the Azeri mob (even in the Soviet Union during the 80s), the Armenians did free their “occupied six”: Nagorno-Karabakh.

Therefore I don’t share your opinion about Qarabag FK. Qarabag FK is an azeri-islamic propaganda football club. They are filled of hate about Armenian Christians. Qarabag FK “are the people”, they are the Huns from Azerbaishan.

We are more than willing to publish an article from you as a right of reply.

Thanks for that.
Any chance of run down of Baku for the fans going there?

We’ll be publishing an article for the travelling fans this weekend.

0
The hand of god

Interesting post from Bellarminus I remember reading about the war in Nargony Karabahk shortly after the break up of the USSR and i am aware that the Armenians suffered more than most under the Soviet regime and of course were the victims of genoicide by the Turks.There is always two sides to every story.

0
The hand of god